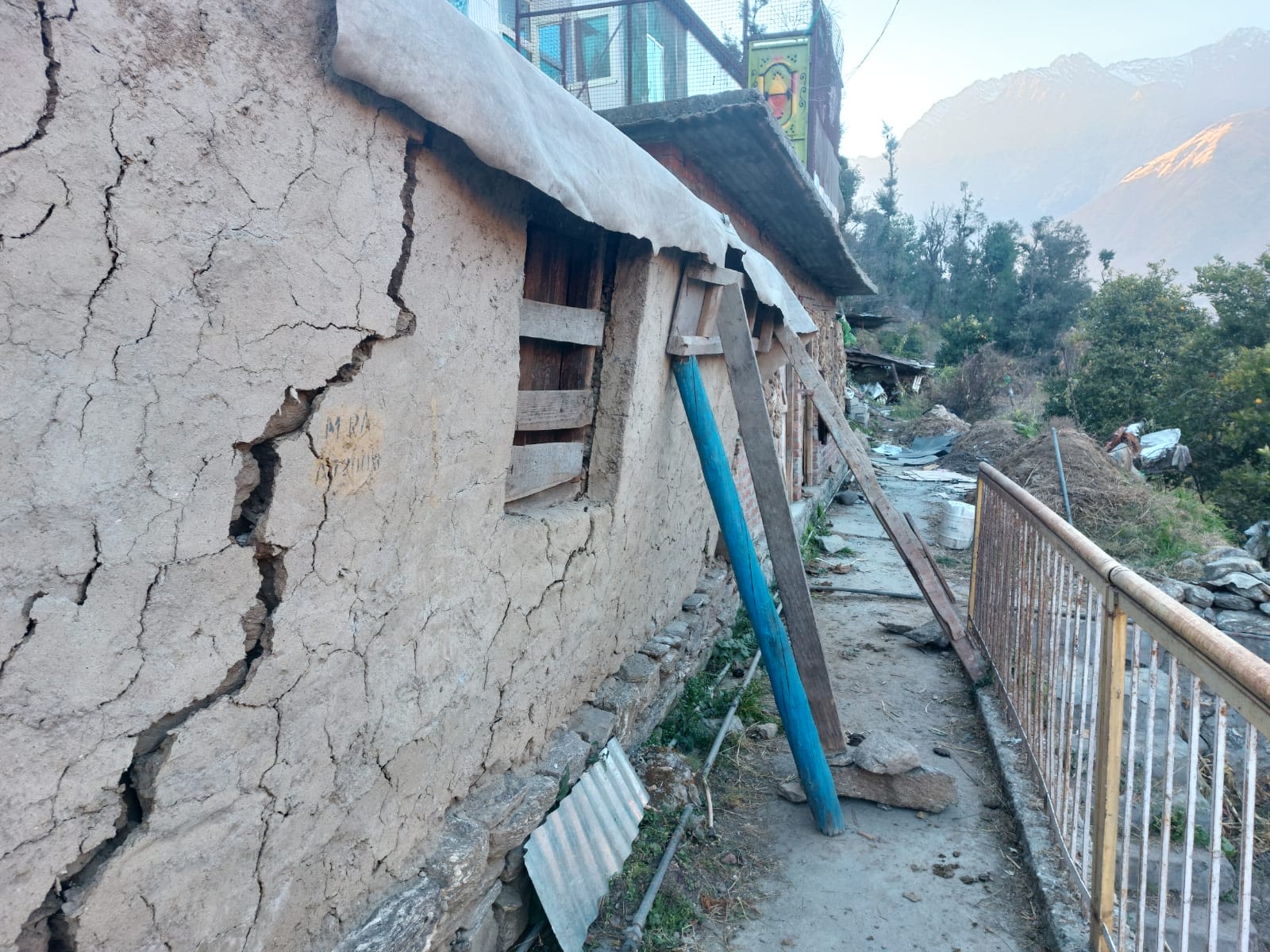 Joshimath Brings the Plight of Mountains to the Fore

JOSHIMATH, the historical town in the border district of Chamoli in Uttarakhand, is the gateway to the world-famous snow sports destination Auli, supreme abodes of faith Badrinath and Hemkund Sahib, and the Valley of Flowers, which draw lakhs of pilgrims and tourists from the country and abroad every year. Years ago, Gaura Devi started the Chipko Movement to protect the environment from Raini village near this town. Asia’s longest ropeway passes over this town.

The winter seat (residence) of Badrinath, the sacred pilgrimage centre of Hindus, is also here in the Narasimha temple. The seat of Shankaracharya of Jyotirmath is located here. Joshimath is not only a town but also a religious and cultural centre. Once upon a time, it was also the capital of the Katyuri dynasty of Garhwal. Despite this, Joshimath is struggling for its identity today. Due to subsidence, the future of Joshimath is uncertain.

Subsidence taking place in various wards of Joshimath has taken away peace from its residents and there is an atmosphere of panic. Cracks in houses and other infrastructure have made parts of the town uninhabitable. People are not able to hold back their tears. The atmosphere is very sad. People had spent their hard-earned money on the construction of their houses, but today their homes are no longer safe. From fields to houses, everything has come under the grip of subsidence. Today, people are forced to live under the open sky as the land is sinking creating cracks in houses.

The people of Joshimath have been demanding for a long time to save the town from subsidence. In 1976, a committee headed by the then Garhwal commissioner, M C Mishra gave a detailed report to the then government regarding the sinking of land in Joshimath. The report stated that the city is situated on a moraine that came with the glacier and flagged prospective dangers as a result of it. The committee further forbade building heavy and big projects in this area as it is also a sensitive area of Zone-5 from the seismic point of view. But successive governments never made any concrete and serious efforts in this direction. Rather uncontrolled construction in this area has been allowed by government officials to build big hotels. Despite strong opposition from local people, permission was also given for the construction of the 520 MW Tapovan-Vishnugad hydel project. Not only this, the four-lane Vishnuprayag bypass road is being constructed along the toe of the slope on which Joshimath is situated. Heavy blasts are being triggered for this, due to which the entire Joshimath has been completely shaken. Governments have created this dangerous situation for their profits. The government did not take any lesson even from the Tapovan-Raini accident of 2021, in which more than 200 laborers were buried alive. Due to the intervention of the CPI(M) and the CITU, the families of the deceased were able to get proper help. The people of Uttarakhand are paying a lot for the production of electricity, yet they are forced to bear the burden of high electricity costs and frequent power cuts. We are an energy-producing state just in the name.

The 1970 Dhauli Ganga flood shook a large land area from Patal Ganga, Helang to Dhak Nala, after which the Kedarnath disaster of 2013 and the Raini disaster of February 2021 hit the areas from Tapovan to Vishnuprayag. Due to increased erosion on the banks of the river, landslides increased. Today the tunnel of Tapovan-Vishnugad project of NTPC is under construction and going on right under Joshimath which is considered one of the biggest reasons for the subsidence happening today. Subsidence has been reported in the past as well, specifically from Helang to Paini village and in Selang village. Now, Gandhi Nagar, Marwari, Lower Bazar Narsingh Mandir, Singhdhar, Manohar Bagh, Upper Bazar Dadon, Sunil, Parasari, Ravigram, JP Colony, Vishnuprayag are the most affected areas of Joshimath. To date, the administration has identified 718 buildings as damaged buildings, excluding that of the army and paramilitary forces. The affected families include about 150 Scheduled Caste and 60 Scheduled Tribe families.

Instead of talking carelessly here and there, the people in power will have to behave responsibly and they will have to make arrangements for warm clothes, blankets, rations, and houses for affected people to stay in this severe cold without any delay. From the very beginning, the CPI(M) has been in favour of pro-people projects, which should be made keeping in mind the environment and public facilities. The Party has been strongly opposing the projects made for profiteering and unplanned development. The party has been continuously demanding permanent evacuation of the affected people of Joshimath giving compensation on the lines of Badrinath, setting up a team of high-level experts and geological experts to save the town, and declaring the Joshimath disaster a national disaster. We have demanded that the state government make proper arrangements for temporary housing, warm clothes, blankets, and ration, for which the party is protesting and sending memorandums from all the district headquarters and also from the temporary capital of the state.

On January 10, a Party team went to Joshimath under the leadership of Chamoli district secretary, Bhupal Singh Rawat. Mohan Singh, Madan Mishra, Narendra Rawat, Basti Lal, Purushottam Sati, Manmohan Singh, and Gyanendra Khantwal were part of the team. They toured the entire area, interacted with the affected people, inspected relief camps, and also addressed the protest going on at the tehsil headquarters. The delegation met the district magistrate of Chamoli to highlight the problems of the affected people. A memorandum was sent to the state government on January 11. The Party has also decided to help the affected families, for which an appeal for funds is being made.