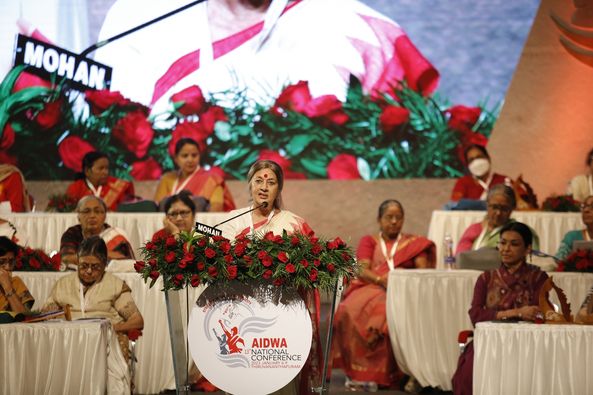 THE 13th national conference of the AIDWA took place at a time when the second Narendra Modi government and its corporate and right-wing allies have used the pandemic and its aftermath to thrust their neo-liberal policies, communal polarisation, Manuwadi values, and authoritarian control over every sphere and aspect of life. This has brought untold hardships for a majority of the working classes, particularly women and minorities, deprived sections such as dalits, adivasis, and other oppressed sections.

DISCUSSION ON INTERNATIONAL AND NATIONAL DEVELOPMENTS

The national section focused on the status of women in India and the disastrous impact of the pro-rich policies of the Modi government on women. It identified the politics of communal polarisation as a major challenge for the women’s movement. It noted that there have been major anti-people legal changes taken up during the pandemic like the four labour codes and the three now-repealed farm laws. All the proposed changes are in violation of constitutional values. The report took note of the massive participation of women in struggles against reactionary forces and neoliberal policies of the government. It hailed the role of peasant women in the historic farmers’ struggle.
In the rich discussion, delegates highlighted the issues of the astronomical price rise, destruction of the Public Distribution System, grim unemployment, rising indebtedness, loot by microfinance institutions, the disappearance of gas subsidy, rising violence against women, and public spaces and nights becoming unsafe for women. It was stressed that the menace of the drug nexus of police, politicians, ruling party and drug agents needs to be combated. The rampant availability of drugs and sale of this hazardous substance outside schools and colleges is destroying the lives of the youth. The laws constituted for the protection of women, including anti-dowry, rape, domestic violence, and workplace harassment laws, are being watered down and scarcely implemented. People in the ruling party support the accused in cases of atrocities against women, in the name of religion or caste or party or familial connections. In many cases like the Kathua and the UP gang rapes, and the condemnable remission of the sentence in the Bilkis Bano case, the RSS-BJP and their associates have been able to derail criminal proceedings and have provided political support for the accused. This shows how the Modi government is targeting the most oppressed sections of the society, in violation of constitutional values and principles.

REPORT ON WORK AND ORGANISATION

The general secretary placed the 100-page report on work and organisation for the last three years and it was discussed by 39 delegates. Outlining the difficulties faced by the organisation during the pandemic and lockdowns, she praised the thousands of AIDWA activists who rose to the occasion, took up numerous struggles and mobilised women.
The delegates raised the issues of women’s struggles against state repression in West Bengal and Tripura, and the communal forces in various states. Women spoke of the need to popularise the pro-people’s alternative policies of the LDF government in Kerala.
Massive and continuous struggles for food security and against price rise have been organised. But we have to intensify them to be able to get the policies changed. AIDWA actively participated in the anti-CAA protests. The contacts developed with Muslim women then will have to be kept alive. The issues of the migrant women workers came to the fore during the lockdowns. Campaigns during the historic farmers’ struggle brought rural women into the struggle in large numbers. The issues of both these sections of women will be discussed and taken up by AIDWA. AIDWA has done commendable work in some states in organising women working under MNREGA. The conference decided to take this demand for work and proper payment of wages all over the country. Campaign for an Urban Employment Guarantee Act will be taken up along with the fight for the rights of unorganised sector workers like home-based and domestic workers and scheme workers.
AIDWA has handled hundreds of cases of violence against women. Immediate interventions and follow-up have led to the conviction of the accused in numerous cases. AIDWA has always steadfastly stood by the family of the victims in their fight for justice. AIDWA has been proposing a law against crimes in the name of honour and the conference decided to take up a nationwide campaign for enacting this law. Delegates reiterated the need to take on the patriarchal Manuwadi forces head-on by deepening our work against caste discrimination. The organisation must reach out to new sections of women and combat the campaign of the RSS through the Rashtra Sevika Sangh, Durga Vahini and other Sangh Parivar affiliates.

Fruitful group discussions were held on the following six commission papers – 'Women’s Movement and Freedom Struggle in India' (Written by Malini Bhattacharya); 'Women’s Rights and the Need for Unity' (Subhashini Ali); 'Climate Change and Women' (Sudha Sundararaman); 'National Education Policy, 2020: A Setback for Women’s Struggle for Equality' (Archana Prasad); 'Unemployment and Women' (Kaninika Ghosh); and 'Rights of the Girl Child' (Manjeet Rathi).
Thirteen resolutions were unanimously adopted. They were: ‘Demanding dismissal and arrest of the Haryana Sports Minister who assaulted a reputed woman athlete in Haryana’; ‘In Solidarity with Struggles against Imperialism and Fundamentalism’; ‘Stop this Corporate Loot of Common Property and Natural Resources’; ‘Struggle for Fostering Scientific Temper and Countering Superstition’; ‘Guarantee Right to Work: Expand MGNREGA, Enact Urban Employment Guarantee Act’; ‘Oppose Deregulation of Microfinance, Ensure Low Interest Loans to Women’; ‘Join the Fight Against Drug Abuse, Take Action Against Drug Mafia’; ‘Resist Attacks on Federalism, Protect Rights of States’; ‘Stop Targeted Attacks Against Scholars, Activists and Journalists’; ‘Revoke the Remission of the Sentence – Expedite Justice for Victims of Gujarat Riots’; ‘On the Kerala Model of Development’; ‘On Impact of Erosion of Ganga Banks on Women and their Displacement' and 'On the International Refugee Crisis and Women's Citizenship'.

·        Strengthen independent and joint struggles against the grave communal danger.

·        Intensify struggles on issues of land rights and of rural women, especially after the renewed attacks on the Forest Rights Act, the drive towards land acquisition, the sharp increase in peasant suicides and the attacks on MGNREGA.

·         Take up the grave issue of the sharply increasing violence against women and girls involving broader sections of people.

·         Support the issues that concern young women more vigorously, by championing women's right to 'choice', for them to live a safe and dignified life.

·        Increase the sweep and intensity of joint issue-based struggles with other women's organisations, and with fraternal class and mass organisations.

The AIDWA published five booklets and the 2023 Diary which were released during the conference. The booklets are ‘An All India Women’s Organisation Takes Shape: Proceedings of the First and the Second Conferences of AIDWA’, ‘Gumnam Virangana (Unknown Women Fighters)’, ‘Early Struggles for Law Reform: Dowry and Rape’. Two books published by Chintha Publications – ‘Women Torchbearers of Kerala’, and the book by M.C. Josephine - were also released.
An inspiring exhibition titled ‘History of the Women’s Movement’ was put up during the conference. It was coordinated by T K Anandi, A G Oleena and Suresh Kumar, Public Relations Department, Kerala.
A dance performance, 'Vande Bharatham', by Regatta School of Dance, and poems by K C Kesava Pillai, Bharatiyar and Bankim Chandra Chatterjee were performed in dance form.

Some important constitutional amendments were adopted by this conference. According to the amended Article 4 (c), any woman including transwoman of the age 15 years and above, who agrees with the aims and objectives of AIDWA, can become a member after paying the requisite membership fee. Two more amendments were adopted, pertaining to the nomination of patrons to the district committee and the actions to be taken against those violating the AIDWA Constitution.

The highlights of the credential report presented in the conference were the following:
The oldest delegate was 80-year-old Vijaya Janaki from Tamil Nadu. The youngest delegate was 21-year-old Sadiquae from Manipur. As many as 215 women participating in the conference have had inter-caste/inter-faith marriages. 110 women were from Scheduled Castes, 48 from Scheduled Tribes and 310 from Other Backward Classes. There are 28 delegates with doctorate degrees, 141 were postgraduates and 182 were graduates. 34 delegates who had participated in the first conference in 1981 were also participating in the thirteenth conference. There were 20 delegates who had participated in all the national conferences of AIDWA. 374 delegates had been arrested and 127 had been jailed. A R Athira, a delegate from Tamil Nadu, had spent 42 days in jail. People's representatives were also present as conference delegates. Seven MLAs, 26 zilla panchayat members and a minister too participated. 38 delegates have been victims of police violence, 53 of communal violence, 37 of domestic violence and 14 of dowry violence. 22 delegates participating in the conference were survivors of workplace violence and 57 of political violence.

On the concluding day, the conference elected a 103-member AIDWA central executive committee, which elected a 34-member central secretariat. Malini Bhattacharya who had completed her three terms stepped down as President due to the three-term limit in the AIDWA constitution. P K Sreemathi was elected as the all India president, Mariam Dhawale was re-elected as the general secretary and S Punyavathi was re-elected as the treasurer.
The other office-bearers are vice presidents – Malini Bhattacharya, Subhashini Ali, Rama Das, U Vasuki, Sudha Sundararaman, K K Shailaja, Debolina Hembram, Kirti Singh, Susan Kodi, Rampari, Jahanara Khan, Remani Debbarma, P Sathee Devi, P K Zainaba and Jagmati Sangwan; Secretaries – C S Sujatha, Rama Devi, Jharna Das, Tapasi Praharaj, Krishna Rakshit, P Suganthi, N Sukanya, Kaninika Ghosh and Asha Sharma; Assistant Secretaries – Madhu Garg, Niyati Barman, Savita, Archana Prasad, T Devi, Mallu Laxmi and Prachi Hatiwlekar.
The outgoing president Malini Bhattacharya was felicitated by Brinda Karat and Mariam Dhawale. Malini Bhattacharya said that she had been a lifelong AIDWA worker and she would continue to contribute to the organisation in these difficult times.
In the concluding session, newly elected president P K Sreemathi said that the tradition of collective leadership and teamwork at AIDWA will continue in the coming years. The year 2024 is a crucial year for Indian democracy, secularism, and the Indian Constitution. The Modi government’s communal, right-wing RSS agenda must be defeated. For that, the AIDWA has to work together tirelessly all over India to mobilise women and bring them forward in the struggle. The newly elected committee will indeed give a thrust to this, she added. C S Sujatha gave the vote of thanks on behalf of the reception committee. AIDWA CEC thanked all the members of the reception committee, its convenor T N Seema and all the fraternal organisations who worked tirelessly for the success of the conference.
The 13th national conference of the AIDWA concluded, raising the slogans of “Reach out to all Women of all Sections”; “Defeat Manuwad”; and “Fight against the Corporate-Communal Nexus”.  At the end, “We Shall Overcome” reverberated in the hall with delegates singing it in Hindi, English, Malayalam, Bengali, Telugu, Tamil, Kannada, and other languages.