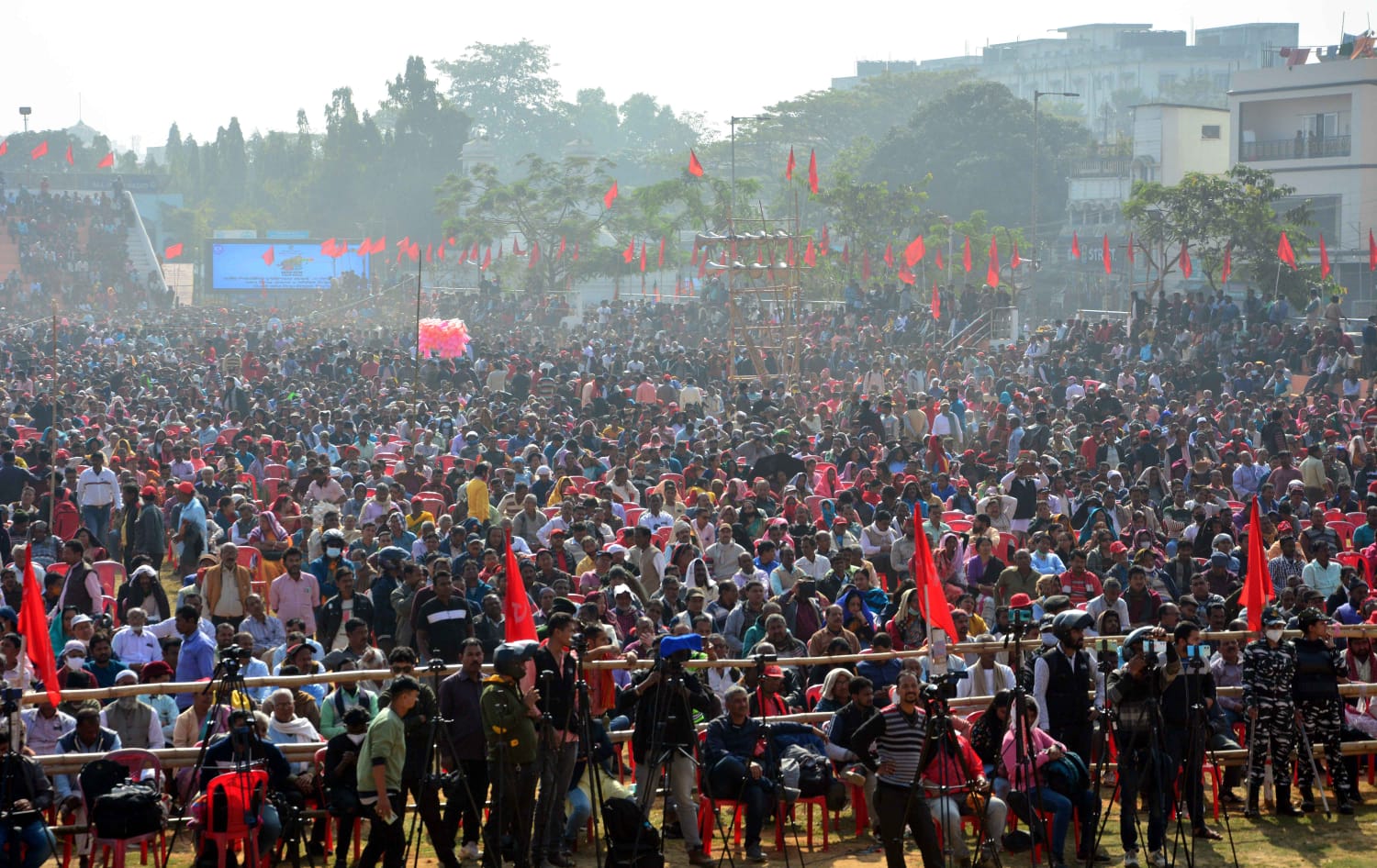 CITU Tripura state committee has organised a mammoth central rally in Agartala on January 8 to protest against the anti-worker and anti-people policies of the government. Working people from all over the state reached Swami Vivekananda Ground, and participated in the rally in huge numbers.

The ruling party BJP tried all sorts of intimidating means to prevent people from reaching the rally ground. Bus and vehicle owners were threatened not to spare vehicles for transportation of the participants. At many places, vehicles already arranged for transportation were withdrawn by their owners at the last moment. Even the train timings were rescheduled to make it difficult for the participants to reach the venue. The flyover at Agartala city was blocked suddenly to stop the incoming processions. Besides, the common people were intimidated to prevent them from joining the rally. In spite of all these, people of all walks of life reached the rally venue, braving all odds, in huge processions from all parts of the state. The entire rally ground and the adjoining area was occupied by the red brigade waving red flags and banners all over. Such a massive turnout in the rally has got immense significance in view of the state assembly election expected to be held within a month or two.

Presence of youth and women, sporting red shirts, dresses and caps exhibited the exuberance of the people. There were daily labourers, masons, workers of transportation sector, rice mill, agricultural sector, anganwadi, plantation sector, shop and establishments, small scale industries etc, with a determination to fight for their rights. Many of them shared their experiences during the present regime of BJP-led government, from which the deep crisis looming large on the public life was evident. One person revealed that he was working in a private company in Bodhjungnagar Industrial Estate, but has been rendered jobless a few months back due to sudden closure of the company. Another person, working in a rubber plantation in South Tripura told about the crisis that gripped the rubber industry. Another tribal gentleman told that the collapse in public distribution system in the state has resulted in acute misery for the common people. One tribal lady coming from Hezamara informed that the self help group movement, which experienced steady growth during the earlier Left Front government, has now lost its glory and momentum. Another tribal lady, coming from a far and remote area of Gandachhera told that she prepared for coming to the rally by cooking food the previous night and carrying it to the rally ground so that she could take her meal during the day. Sukomal Chakma of Nabincheera told in a very confident voice that, the tyrannical BJP regime must end.

The huge crowd assembled in the rally was addressed by CPI(M) Polit Bureau member Manik Sarkar, CPI(M) state secretary Jitendra Chaudhury, CITU state president Manik Dey, CITU state general secretary Shankar Prasad Dutta and the state convenor of All India Co-ordination Committee of Working Women Panchali Bhattacharya. The call for building up united resistance against the anti-people policies of the state and the central governments was echoed by all the speakers.

Manik Sarkar, in his speech, made a call to the people to defeat the fascist government in the coming election. He asked the people to take a decisive role for establishing a government which will be driven by pro-people policies and programmes. Under the present government, not only the working class, but all sections of common people including women, youth, students, tribal people, Scheduled Castes, OBC, minorities, small traders are under attack. The ADC area too, like the whole state, has been reeling under severe crisis. There is no work, no employment, and no income in those areas. Schools are there, but teachers are not. ADC administration says that they do not get the required funds from the government. Manik sarkar clearly mentioned that, problems can never be solved keeping this government in power. The ruling party members too are realising that they will not be able to win the election. Out of despair, they are unleashing terror on the entire state. He told that the historic responsibility of establishing a people’s government by defeating the fascist regime is now resting on the common people. Regarding the preparedness for the ensuing elections, he mentioned that, while 100 companies of central forces have already arrived in the state, it is learnt that 300 more companies are coming. While it is always welcome to arrange for adequate security during the election time, the central forces must not be used for furthering the political interests of the ruling party.  If any such attempt is noticed, state’s people will never let it go.

CPI(M) state secretary Jitendra Chaudhury told in his speech that the ruling BJP has enacted another rotten drama in the name of Jana Viswas Yatra (people’s trust campaign) recently flagged off in the state by Amit Shah. This government has earned mistrust of the common people by betraying them for five years. What they are performing now should be called Jana Aviswas Yatra (people’s mistrust campaign). The ruling party has understood that the common people are becoming ready to give them a fitting reply for their misdeeds in the coming assembly elections. Realising this, they are now reaching the households with a report card, but even in that report card, there is not a single word mentioned about their abject failure to implement any of the promises made in 2018 before the last assembly elections. He told that there is no new reason to place any demand to this anti-people government. Working people have repeatedly placed their demands during the last five years, but this government has turned a deaf ear and blind eye to the cause of the common people during its entire tenure. He reminded that this government may come out with a bunch of new promises before the election, but they are not to be trusted, because they proved to be unworthy of trust. They are beating their drum by claiming that they have granted 12 per cent DA to the government employees at a time. But the truth is that the total extent of DA granted to the employees in the last five years is only 20 per cent, whereas the last Left Front government had granted 46 per cent DA in the last five years of their tenure. He asked the people to unseat the government with a view to protect the interests of common people.

CITU state president Manik Dey mentioned in his speech that the ruling party must know that they cannot always fool the people. Everyday experiences will make people understand who their friend is and who the foe. With statistics he mentioned how every sector of the state, starting from construction to transportation, plantation, rubber and even the labour market has been destroyed by the five years’ misrule of the present government. Establishing new industrial ventures is a thing not experienced in the last five years, even the existing units have been destroyed, he said.

CITU state general secretary Shankar Prasad Datta made a call to the working people to take a vow to unseat the anti-people government, before returning home from the rally. The much vaunted double-engine government has practically turned into a ‘trouble-engine’ government for the common people, he noted.

Panchali Bhattacharya mentioned in her speech that the working women too are targeted by the misrule of last 58 months. Livelihoods of Anganwadi, ASHA, Mid-day meal workers and others are subjected to severe attack by the policies of the government. Their honour too is at peril. The only way to come out of the precarious plight is to change the government, she said.

The meeting ended with a steely resolve among people to defeat the ruling party decisively in the ensuing elections.