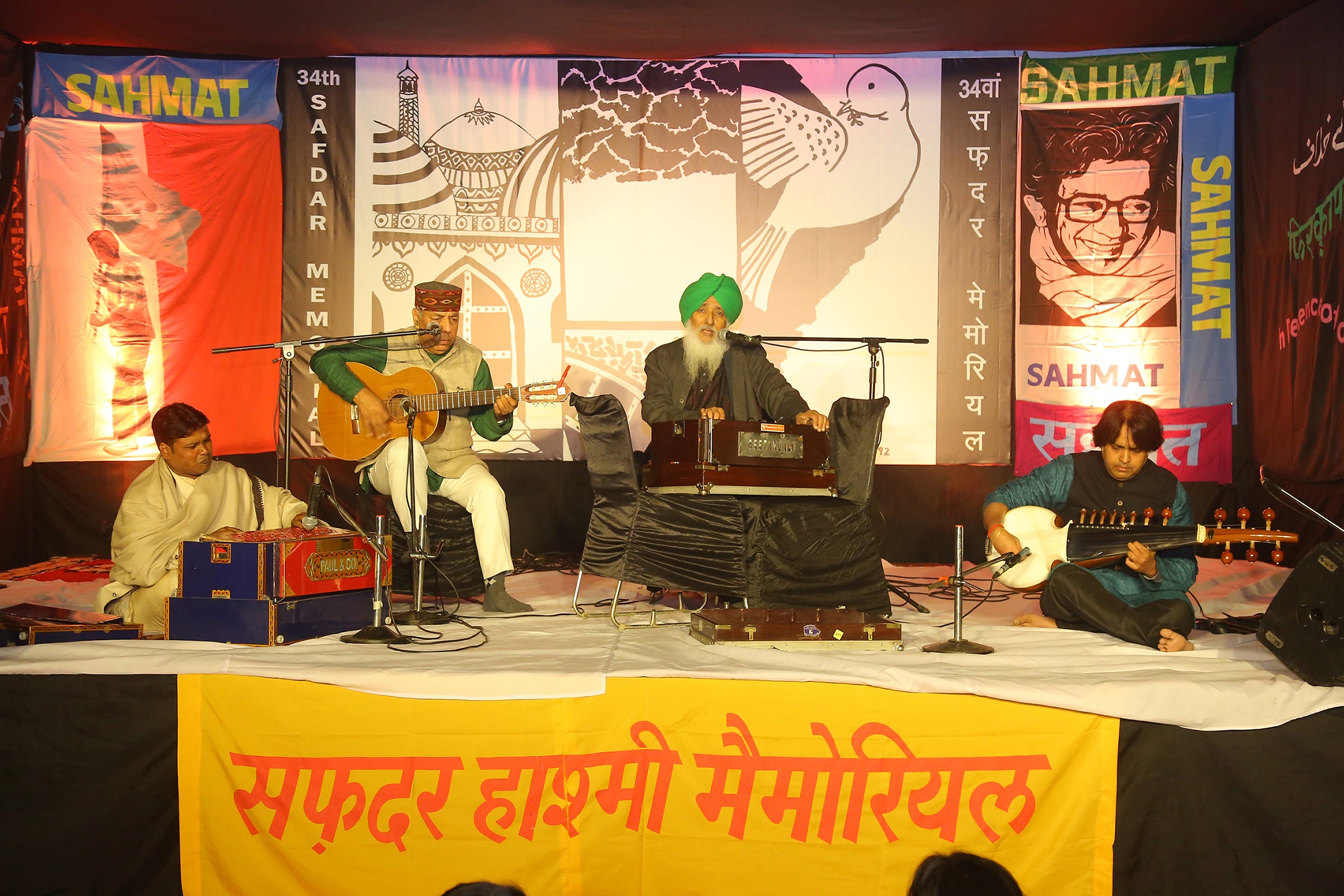 AFTER a gap of two covid years, the 34th Safdar Hashmi Memorial was observed at HKS Surjeet Bhawan on January1, 2023 – a unique confluence of cultural, intellectual and political. In the day-long programme there was music and poetry, books and calendar releases, tributes and a reminder that the end of the year 2022 marked 30 years of the demolition of the Babri Masjid on December 6, 1992 by the Hindutva hordes besmirching the republic.

The cloth walls of the make-shift auditorium were decorated with colourful banners of verses written by Sufi-Bhakti poets and also by contemporary poets. The backdrop of the stage was a reproduction of an evocative painting by the late Shamshad Husain,  painted by him following the demolition. The auditorium design and its execution was helped by Kanishka Prasad, Vertika Chaturvedi, Aban Raza, Arushi Vats, Pragya S and volunteers Rahul, Amit, Naresh, Shyam Singh and untiring Kausar and Ashok.

All this was accompanied by exhibitions, one on the history of Ayodhya, invoking the rich legacy of our common culture and interwoven life in order to counter the propaganda of religious separation. The second exhibition portrayed the life and work of Safdar Hashmi, whose supreme sacrifice came as a grim reminder of the dangers faced by those who dare to speak out for an equitable social order and of the importance of defending freedom of expression--ideals held dear by Safdar and carried forward by SAHMAT for the last 34 years

The programme commenced with the Aanya singing and playing the guitar. The 17 year old Aanya – the youngest ever artists to perform at SAHMAT – set the mood for the day by singing Kaun Azad Hua by Ali Sardar Jafri, Dastoor by Habib Jalib, Meri Khwahish Hai ke Yeh Soorat Badalni Chahiye by  Dushyant Kumar, and ending with Hum Dekhenge by Faiz.

The vibrant Vedi sisters of the Aahvaan, by now familiar to SAHMAT audiences, took to stage next. They sang the poetry of love and brotherhood among all people, poetry of the great medieval poets like Kabir, contemporary poets and some of their own poetry. Their music was interspersed with recollections of their experiences while travelling through different parts of the country.

Sohail Hashmi who was conducting the proceedings invited MK Raina, one of SAHMAT founders, eminent theatre personality and a friend of Safdar Hashmi to release the reissue of a selection of Safdar Hashmi’s writings, first published in1989. MK Raina also released the 2023 calendar, documenting the life and work of Safdar Hashmi by presenting it to NK Sharma, a close comrade of Safdar. NK Sharma is a known theatre director and one of the founders of Jan Natya Manch. The artist Vijendrer Vij helped Lalit Narain of SAHMAT in designing the calendar.

Famous puppeteer Dadi Pudumjee, an old associate of Safdar Hashmi, and SAHMAT who had first performed in Safdar Samaroh in 1989 with modern dancer Astad Deboo and his team of puppeteers, presented an excerpt from their full-length puppet play based on the teachings of the great Persian poet/ philosopher Rumi.

Poet Naveen Chourey had the audience in splits with his biting satire on the Modi-Shah duo and had them stunned with his incisive commentary on the severed inked finger of a voter.

Given the traffic chaos in Delhi on January1 some of the Hindi poets who had committed to recite their work could not reach the venue, those who could and recited their poetry included Tek Chand and Jasveer Tyagi, both active members of the Janvadi Lekhak Sangh, the organisation of progressive writers that has been associated with SAHMAT from its inception. Senior poet and respected journalist Vishnu Nagar recited a few of his deeply satirical poems.  Professor Apoorvanand, Saif Mahmood and Sohail Hashmi, Sangeeta Manral Vij recited a number of famous and popular poems including the poetry of Sahir Ludhianvi, Kuldeep Kumar, Kumar Ambuj, Ekram Khavar and others.

Since a number of artists could not reach the venue on time, the programme was suspended for about half an hour which provided people to greet old and new friends and partake the refreshment that was available on the venue. This time also allowed people to pick up the calendar, Che Guevara cups and Hum Sab Sahmat bags, produced for the occasion.

One of the most prominent among the leading vocalists of the younger generation, Sunanda Sharma who had so readily agreed to perform for SAHMAT, had in fact rescheduled one of her prior commitments to be in Delhi, on the first and had been stuck in traffic for almost two hours, went onto the stage to give a most scintillating performance. Sunanda Sharma who trained under Padma Bhushan Girija Devi sang traditional Punjabi compositions including the classical tappa in a style that was uniquely Benaras. She concluded her presentation with a Meera Bhajan and the audience experienced the inclusivity of both our classical and folk traditions when Benaras, Punjab and Rajasthan came together in one performance.

Sunanda Sharma was accompanied on the Tabla by Ustad Akhtar Hussain, on the Harmonium by Pandit Sumit Mishra and on the Sarangi by Pandit Anil Mishra. Two of her disciples Pooja Mohley and Manisha Mishra provided support on the Tanpuras.

Two extremely talented young musicians, Aayush Mohan and Lakshay Mohan followed Sunanda Sharma, first it was Aayush Mohan on the Sarod who began with Raag Jaijaiwanti and followed it with a composition in Madhyam se Gara, Aayush Mohan was followed by Lakshay Mohan who began with Raag Madhuvanti and concluded with Raag Khamaj. The young musicians have trained in the famous Maihar Gharana and are recognised well beyond the borders of India being the only Indian artists to have performed at the Grammy Museum. Both were most skilfully accompanied on the Tabla by Pandit Sanju Sahay of the Benaras Gharana.

For years the group of artists who are the last to take to the stage are the group known as  the Chaar Yaar and it was in keeping with this tradition that Madangopal Singh (a closefriend of Safdar Hashmi and founder member of SAHMAT) Deepak Castelino, Pritam Ghoshal and Amjad Khan took the stage and presented a medley that drew from the Persian, Turkish, Punjabi, Sindhi, Saraiki traditions of Sufi Mystics to the  progressive poetry of the 1930s and 40s and from the anti-war poetry of the 1970s in the USA. The evening drew to a close as fog started to descend on the streets of Delhi and the thousands that had blocked all roads in Delhi for the whole day had begun to return home.

The one thing that the organisers of the memorial and many in the audience will long remember about the 34th Safdar Memorial is the support of the artists, both young and senior, so readily extended by willingly making changes in their prefixed schedules to be able to perform at SAHMAT.

Aside from the riveting performances, cutting through poetry recitations, poetry of protest, songs of the freedom struggle, classical music and puppet theatre, there were also short interludes in which new publications were released throughout the day.

A selection of writings in Hindi (Hamare Daur Mein) by the Marxist intellectual Aijaz Ahmad which were published earlier on various occasions were put together as a tribute to SAHMAT’s friend and supporter Aijaz Ahmed. The editor of the volume Rajendra Sharma gave a brief introduction to the selection. Releasing the volume Prof. Prabhat Patnaik underlined the charming aspects of Aijaz’s personality and theoretical significance of his writings.

Two volumes - Gandhi Reconsidered and its Hindi translation Gandhi Punarvichar were released by Prof. Mridula Mukherjee who pointed out the significance of SAHMAT’s work. The volumes were earlier published in the year 2004 and were out of print for a long time.

Adding to the list of children’s publications, a book -Dard Battisi written by Rajinder Arora, an energetic supporter, designer, publisher and a writer was also released.

Sohail Hashmi who tirelessly conducted the proceeding called it a day with a vote of thanks to the comrades in Surjeet Bhawan, Vandana Sharma and Sujata for their full co-operation and comradery.

The material produced on the occasion, a calendar, books, Hamare Daur Mein, Gandhi Reconsidered, Gandhi Punarvichar, Dard  Battisi and cups and bags are available at SAHMAT.