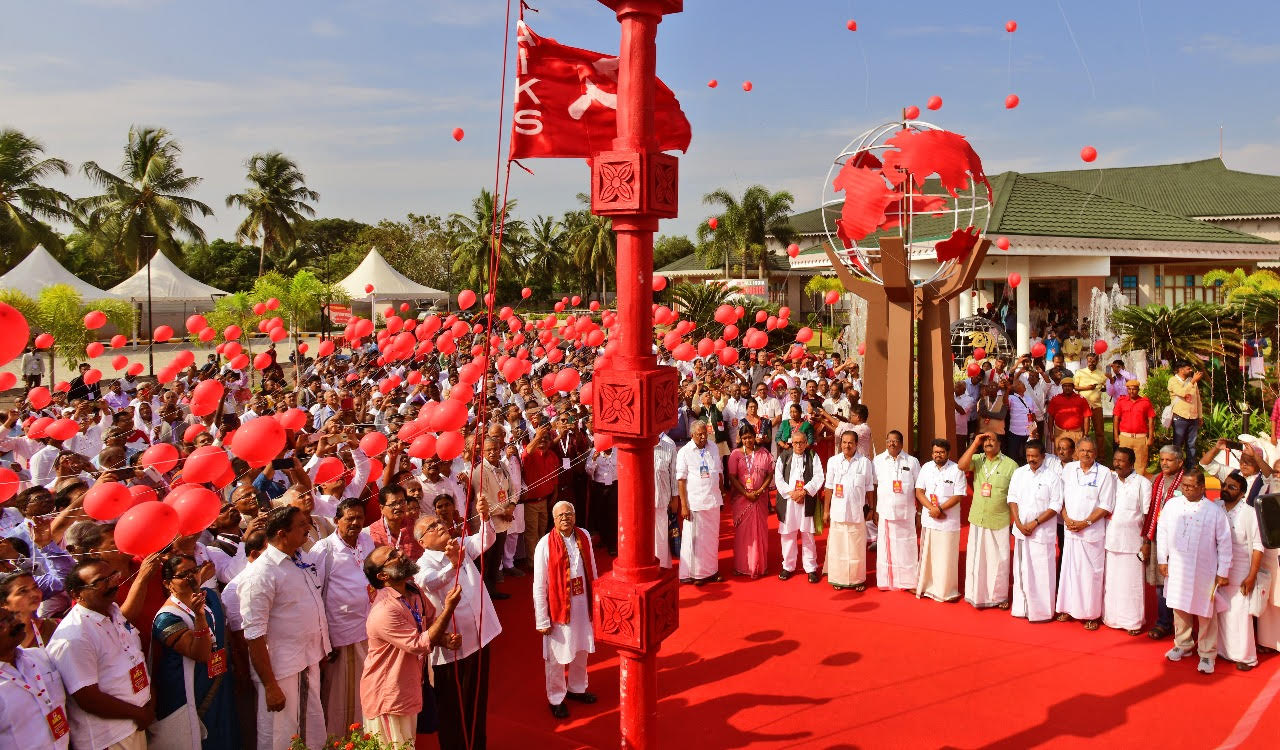 THE 35th national conference of the All India Kisan Sabha (AIKS) began at Thrissur, the cultural capital of Kerala, on December 13, 2022, amidst infectious enthusiasm. The 34th conference of the AIKS was held five years ago in October 2017 at Hisar in Haryana. Thrissur city and district, and in fact, the whole of Kerala, had dressed up for the occasion with innumerable red hoardings, red banners, red flags and red buntings that were put up by people everywhere to welcome the AIKS national conference.

The Thrissur conference campaign began at the all India level with the nationwide AIKS call for flag day on November 15, 2022, the birth anniversary of the legendary freedom fighter and adivasi peasant martyr Birsa Munda. Accordingly, flags were hoisted in lakhs of places throughout the country.

Three martyrs' flames were brought from Telangana and Tamil Nadu to Kerala in the beginning of December 2022 – one from Kadivendi in Telangana, the village of the first martyr of the historic Telangana peasant struggle Doddi Komaraiah, the second from Keezhvenmani in Tamil Nadu where 44 agricultural workers were burnt alive on December 25, 1968 by feudal landlords, and the third from Salem Jail in Tamil Nadu where on February 11, 1950, 22 comrades, many of them leaders of the Kisan Sabha, were shot dead by the police.

These jathas led by AIKS joint secretary Vijoo Krishnan and finance secretary P Krishnaprasad addressed several public meetings on the way and reached Thrissur on December 12. The flag post from Kayyur under the leadership of Valsan Panoli, state secretary of the Kerala Karshaka Sangham, and the red flag of the AIKS from Punnapra Vayalar under the leadership of M Vijayakumar, president of the Kerala Karshaka Sangham, also reached Thrissur on December 12. With thousands of people giving the jathas a rousing reception, they all marched to the venue of the public meeting of the conference, Comrade Kodiyeri Balakrishnan Nagar.

On the morning of December 13, the conference venue had a festive atmosphere. Hundreds of red volunteers, both women and men, led a march through the venue. Hundreds of red balloons were ready to be launched in the air. Along with the AIKS central office bearers, CKC and AIKC members, and over 800 delegates and observers from 26 states, the peasants and people from Kerala were present in large numbers.

It was in this enthusiastic atmosphere that AIKS president Ashok Dhawale unfurled the flag of the 35th national conference, amidst resounding slogans. All present paid floral tributes to the tastefully decorated martyrs’ column which was in the shape of a globe, signifying the international solidarity of the working people.

The chairman of the conference organising committee, K Radhakrishnan, delivered a brief welcome address. After warmly welcoming all delegates, he said, "We are hosting the All India Conference of the AIKS at Thrissur for the second time. We had the opportunity to host the 18th conference of the AIKS in 1961. It was the silver jubilee year of the Kisan Sabha. Our legendary leader Comrade A K Gopalan was the president. AKG presided over this great organisation from 1956 to 1977. I take this opportunity of paying homage to AKG and other great leaders and workers of the AIKS who made this mighty organisation…Thrissur is not only the cultural capital of Kerala, but this is also a place which has a rich heritage of class struggles and is the land of the great martyr Azheekodan Raghavan… Kerala is hosting the all India conference of the AIKS for the fourth time.”

Radhakrishnan further said, “The beautiful state of Kerala with its progressive traditions has become a role model in many fields. The first government of Kerala under the leadership of Comrade E M S Namboodiripad laid the foundations of a modern Kerala, with the vision of changing society from the caste-feudal-landlord system to a progressive society. The Left Democratic Front governments have consistently tried to uphold the task of building up a Kerala model of development. This vision is an alternative to the neo-liberal policies and should be extended all over India.”

AIKS joint secretary N K Shukla placed the condolence and martyrs’ resolution. The hall was named after former general secretary of the AIKS, Comrade K Varadharajan. The conference rose to pay homage to all those leaders and others who had passed away in the last five years.

AIKS president Ashok Dhawale delivered the presidential address. He began by saying, “I extend warm revolutionary greetings to all of you who have assembled at Thrissur, the cultural capital of Kerala, for the 35th National Conference of the All India Kisan Sabha (AIKS), which is the oldest, the largest, and the most powerful peasant organisation in India, with a membership of nearly 1 crore 37 lakh spread across 25 states of our country today.

“Our national conference is being held in Kerala after 23 years, in a state which has the distinction of having the strongest unit of the AIKS, through intense struggles and untold sacrifices over many decades. We pay deep homage to the thousands of martyrs of Kerala, and all over the country, both before and after independence, who have made the supreme sacrifice of their lives, to keep the red flag flying high. We pay our tribute to the memory of our legendary kisan leaders of Kerala – Comrades P Krishna Pillai, A K Gopalan, E M S Namboodiripad – and many others.”

While speaking of the historic farmers’ struggle of 2020-21, he said, “We are meeting five years after our last Hisar conference in Haryana in October 2017. These five years have seen an unprecedented period in the history of peasant struggles in India. It was crowned by the historic one year fifteen day long united struggle of lakhs of farmers at the borders of Delhi from November 26, 2020 to December 11, 2021. The struggle received massive solidarity from farmers, agricultural workers and the working class from all over the country. It forced the pro-corporate, communal, and authoritarian BJP-RSS government of Narendra Modi to repeal the three black farm laws. That was a magnificent victory. But many challenges still remain.

“Since this is the first national conference of the AIKS after that victory, I take this opportunity to warmly congratulate the farmers of India led by the Samyukta Kisan Morcha (SKM), the workers and employees of India led by the central trade unions (CTUs), and the agricultural workers, women, youth, students, small traders and transporters, professionals and all other sections in India and our diaspora abroad, who played a valuable role in fully supporting this extraordinary farmers’ struggle. We deeply appreciate the efforts made by all of them.

“As is our general practice, our general secretary’s report will take detailed stock of the agrarian situation, our movement and our organisation. Here we shall briefly focus on the political challenges that we have to face and combat in the days ahead.”

Ashok Dhawale then briefly dwelt upon the major political challenges, with particular reference to the many-sided dangers of imperialism at the international level, and the scourge of neoliberal policies, communalism, casteism, authoritarianism, and corruption – all embodied in the Modi-led BJP-RSS regime at the national level. He called for massive independent and united struggles against these dangers, backed by strong and effective political-ideological campaigns, and a determined drive to strengthen the organisation.

The conference was greeted by AIAWU president A Vijayaraghavan, AIDWA general secretary Mariam Dhawale and NPRD leader Muralidharan. The inaugural session then concluded.