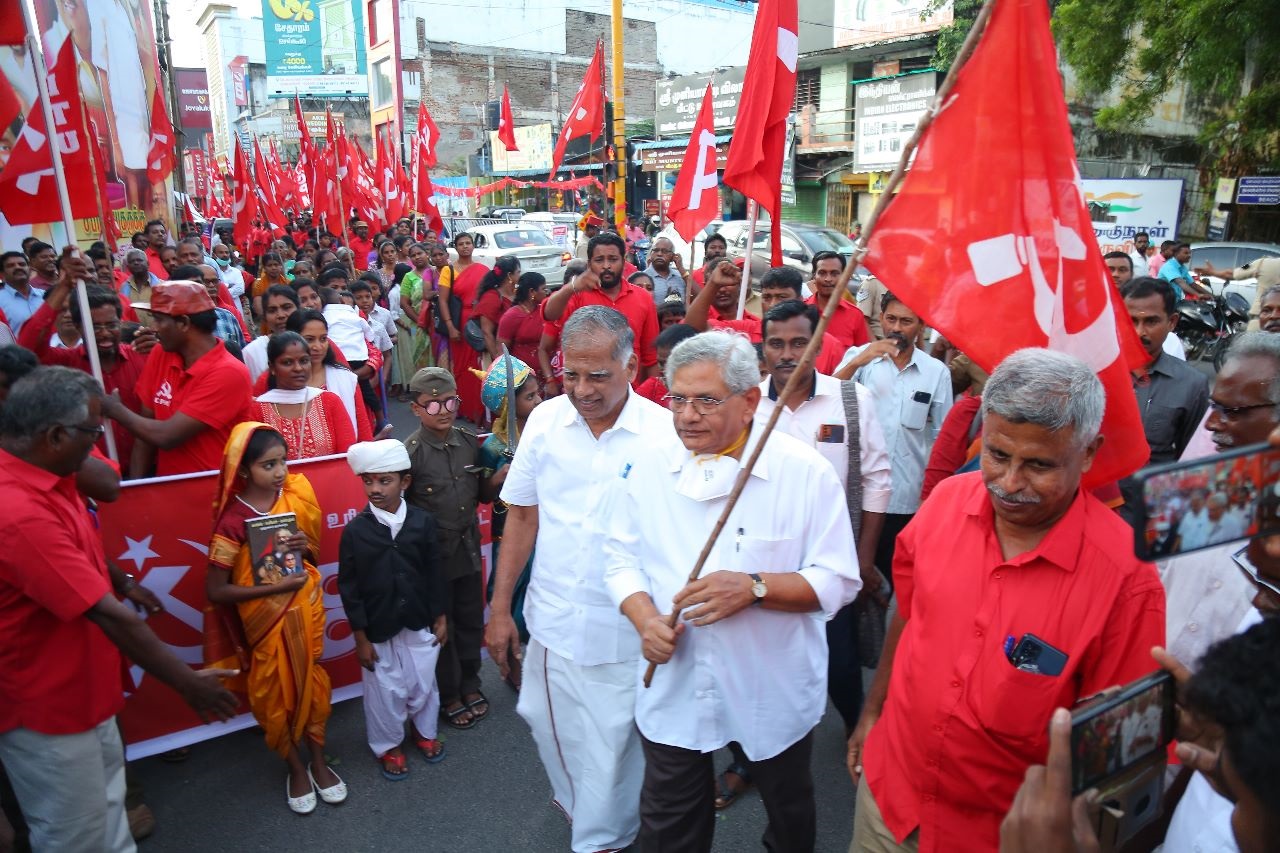 THE CPI(M) state organising committee of Puducherry organised a special conference on November 13. This special conference, which was the first major public programme being held in Puducherry after it was given recognition as a state committee by the Party Central Committee, witnessed an unprecedented mass gathering of Party members and public, at the Kamban Kalai Arangam Auditorium.

This was preceded by a colourful rally led by hundreds of red volunteers, who marched with flags to the sound of the thappattam – the drum beat of the oppressed. Among the highlights was the participation of young children in costumes of our freedom fighters like Subramania Bharathi, Velu Nachiar, Kodi Kaatha Kumaran,  Madurai Veeran, VO Chidambaranar and others, who charmed and inspired the crowds as they walked through the main streets of Puducherry. A sizeable section of women and youth also took part.  The spirited rally entered the auditorium as it echoed with the revolutionary songs rendered by the Puducherry Safdar Hashmi cultural troupe.

After the state secretary, Rajangam’s presidential address, the declaration of the conference was released by CPI(M) general secretary, Sitaram Yechury. It comprised  a set of resolutions which highlighted the burning issues being faced by the people of Pondicherry, and urged the Modi government at the centre, and the BJP –NR Congress alliance in the state to take immediate action on them. Some of these crucial issues included:

Sitaram Yechury addressing the conference made a scathing criticism of the ‘double engine’ government : BJP at the centre, and BJP /NRC in the union territory of Puducherry – which ought to have ensured development in all spheres. But on the contrary, it has failed miserably in all aspects of ensuring people’s welfare. Such is the experience of the states where  ‘double engine’ governments are in power, he said, giving the example of how ordinary people are suffering under the Yogi/Modi rule in Uttar Pradesh for many years now.

He spoke about how the BJP is running a rival government through the governors, in states ruled by opposition parties. This is how the Modi government is trying to disrupt development in states like Tamil Nadu and Kerala. He questioned why the lieutenant governor of Puducherry, who is indulging in competitive politics, does not talk about statehood status for Puducherry? The governors are least bothered about people’s welfare. Rather, their agenda is to completely undermine the powers of states ruled by the opposition parties, and bring them under the control of the union government, he said.

Yechury also described how the Modi government is all the time engaged in the task of fulfilling the RSS objective of establishing a Hindu rashtra. The obstacle to this project is our constitution. Hence, it is working to dismantle the pillars of secularism, democracy, social justice, economic freedom, and federalism, enshrined in the constitution. This should never be accepted by the people of our country, or the non BJP political parties. The country should advance, towards socialism, and not go backwards, by weakening of the constitution. A broadest platform to protect the Indian republic and take forward people’s struggles is the need of the hour, he said.

In this context, the aim of the BJP, in trying to transform Puducherry into an experimental centre for Hindutva ideology, and corporate model of governance, has to be firmly resisted. Amidst applause from the audience, he said, we have to get back the ‘amrit’ from these rulers, and give it to the people, we have to work for their well being, and safeguard their rights.

G Ramakrishnan, CPI(M) Polit Bureau member, delivering the inaugural address, brought out the plight of people under BJP NR Congress rule in Puducherry. He appreciated the efforts that had been made by the Party comrades to mobilise all sections for the conference, and especially greeted the young children who had donned the costumes of freedom fighters and social reformers.

He focussed on how the NFSA has been shamelessly undermined in Puducherry, and the utter impunity with which ration shops had been completely closed down for over three years in the union territory. He ripped apart the BJP NR Congress for their inability to make good on their election promises, and demanded their resignation if the fair price shops could not be re opened as guaranteed by them. While Kiran Bedi- the previous LG- enforced the direct cash transfer scheme despite opposition from the elected Congress government of that time, he criticised the newly elected BJP/ NRC government which distributed neither ration nor cash to the people. He exposed the fraudulent way in which the Puducherry minister for food and civil supplies tried to create an impression that poor people wanted cash transfer, rather than rice. He congratulated the comrades for their militant protest on this issue, due to which some relief was obtained. He called on them to continue the struggle until the ration shops are reopened, and essential commodities are provided along with rice, like in Tamil Nadu and Kerala.

Ramakrishnan also highlighted the plight of farmers in Karaikkal, who were suffering so badly under this regime that they were even considering migration to Tamil Nadu, in search of livelihood.

Conference resolutions were placed by other senior leaders and secretariat members including T Muruganm, Sudha Sundararaman, V Perumal, S Ramachandran and others.

Leaders of Left parties, and other opposition parties, attended the programme which was a measure of its success. Many small organisations working on people’s sectoral issues also took part. The participation of leaders from minority organisations was especially noteworthy. They greeted the general secretary and expressed support for all further initiatives that the Party may undertake in future.

The special conference has thus achieved its objective of bringing to the fore an alternate agenda and placing it before the people of Puducherry. The campaign to give publicity to the conference was widespread and effective. In fact, the ‘nayyandi durbar’ , a local art form where a comic dialogue between the actors is used to talk about issues, was a powerful medium of communication, especially in rural Puducherry. Invitations, posters, notices were distributed liberally. All the local committees were activated.

The Puducherry comrades are now highly motivated to carry forward the task of combatting the communal, corporate double engine government that is in place. The state committee has taken upon itself the responsibility of strengthening the Party organisation, and the mass fronts, so that the declaration adopted at the special conference becomes the starting point of militant mass struggles in the coming period.