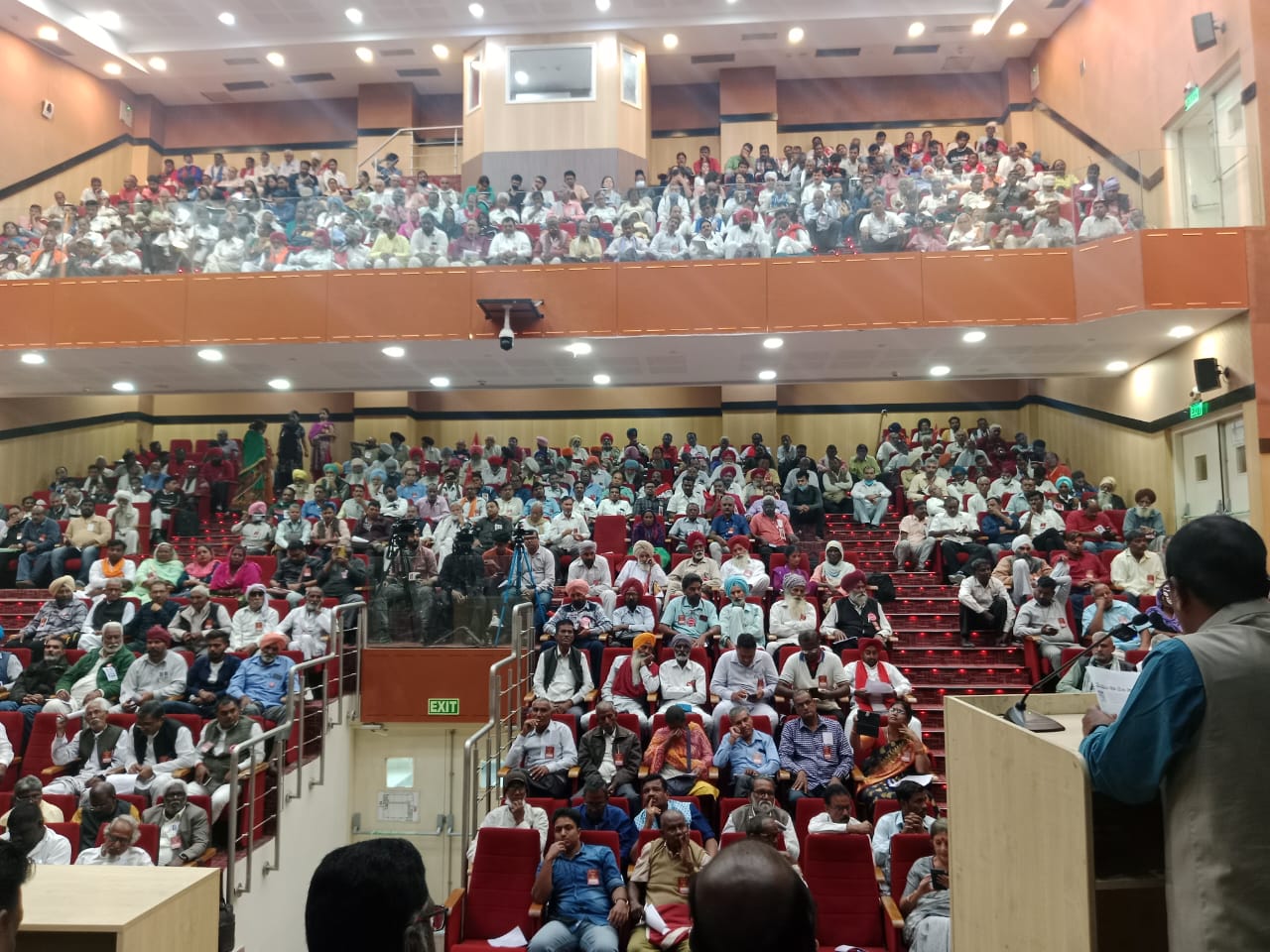 HUNDREDS of people from across India gathered at HKS Surjeet Bhavan in New Delhi on November 5 for a day long national convention against growing attacks on dalits. The convention was jointly organised by Dalit Shoshan Mukti Much (DSMM), All India Agricultural Workers Union (AIAWU), All India Dalit Rights Movement (AIDRM), Bharatiya Kisan Mazdoor Union (BKMU) and All India Agricultural and Rural Labour Association (AIARLA). The convention adopted a charter of demands and gave call for a joint national platform to fight for dalit rights and decided to organise a joint all India protest on February 28, 2023.

Various leaders and activists working for the protection of dalit and minorities’ rights such as Bezwada Wilson, nation convenor of Safai Karamchari Andolan, Ali Anwar, former MP and leader of Pashmanda Muslim Mahaz, Prof. Ratan Lal from University of Delhi among others joined the convention and extended their support.

The convention broadly discussed and adopted a joint resolution with a  charter of demands. The resolution presented by Subhashini Ali, vice president of the DSMM and a member of the CPI (M) Polit Bureau, narrated growing atrocities against dalits in India. The resolution underlined that the atrocities against dalits have increased many folds since the current central government led by the Bharatiya Janata Party (BJP) came to power in 2014 which seems to be working on the ideological programme of manuvaad, long prescribed by its parent organisation the RSS. The resolution proposed a united struggle to implement a set of demands which includes greater protection of constitutional rights of dalits and increased social security and welfare for them.

At the outset, the meeting observed a minute's silence condoling the death of dalits killed in the recent past while doing manual scavenging which, many dalits, are forced to do despite it being illegal and those killed due to various other atrocities committed against them across the country.

Bezwada Wilson while inaugurating the convention talked about emphasising the need to realise the rights prescribed in the constitution through a joint struggle of people. He noted that the country is currently not governed as per the constitution but by the arbitrary brahmanical whims. He called on the organisations working for the rights of dalits and oppressed sections of the society to forget their differences, if any, and join hands to save the constitution and promote the welfare of the oppressed castes.

Placing the resolution, Subhashini Ali invited speakers to discuss the fact of rising atrocities and underlined that the number of atrocities against dalits are rising particularly in states governed by the BJP. She gave the examples of Una in Gujarat and Hathras in Uttar Pradesh. She claimed that the actual number of atrocities is much higher than those recorded by the authorities. She highlighted that atrocities are rising because of active protection provided by the BJP led governments to criminals who commit such acts against dalits. She noted that there is a need for a long drawn united struggle against this nexus between the ruling parties and feudal and brahmanical elements in the country.

Several speakers addressed the points raised in the resolution and extended support to it. Speakers such as Prof Laxmaiah from Centre for Dalit Studies, Prof Ratan Lal, Ali Anwar, Bhagwat Mann (BKMU Punjab), Manoj Manzil (MLA from Bihar) and others extended their support to the resolution and presented some suggestions and additions to it.

Prof Laxmaiah underlined that wherever the Left is strong or has been in power, atrocities against dalits have gone down significantly. He gave examples from Andhra Pradesh where communists were able to also save the interests of the dalit workers through their movements.

Vikram Singh from AIAWU talked about greater need for education among the oppressed in India who often fail to realise the nature and extent of their exploitation as it often comes in the disguise of religion or caste system, tools of brahmanism.

KERALA IS AN ALTERNATIVE

Radhakrishnan also noted that the central government led by the BJP is not happy with the good work done by the Left government in Kerala and is trying, in every way possible, to destabilise it by misusing the constitutional institutions such as the post of the governor among others. He noted that despite all the challenges, the LDF government in Kerala is spending around 12.5 per cent of its budget on the welfare of dalits and adivasis who comprise around 10 per cent of the total population of the state. He gave examples of pucca houses provided to dalits and adivasis, better government schools even in remote areas and other measures taken by the government. He emphasised that when it comes to working for the welfare and development of people, Kerala government is the only exception in the country.

The convention concluded with a plan of action. Venkat (AIAWU) proposed that in the coming months attempts would be made to create a joint national platform for dalit rights on the pattern of Samyukt Kishan Morcha (SKM). The joint national platform will include groups already present in the convention but will not be limited to them and will include a wide range of groups, organisations and unions. He also mentioned that in January next year all states will have their own conventions on the pattern of the current national convention which will discuss their own state specific issues and adopt charters of demands. All the demands and issues will be clubbed together to develop a national charter of demands.

Based on the national charter, a nationwide protest will be organised on February 28 where all organisations part of the joint platform will demonstrate in their respective state capitals in large numbers.