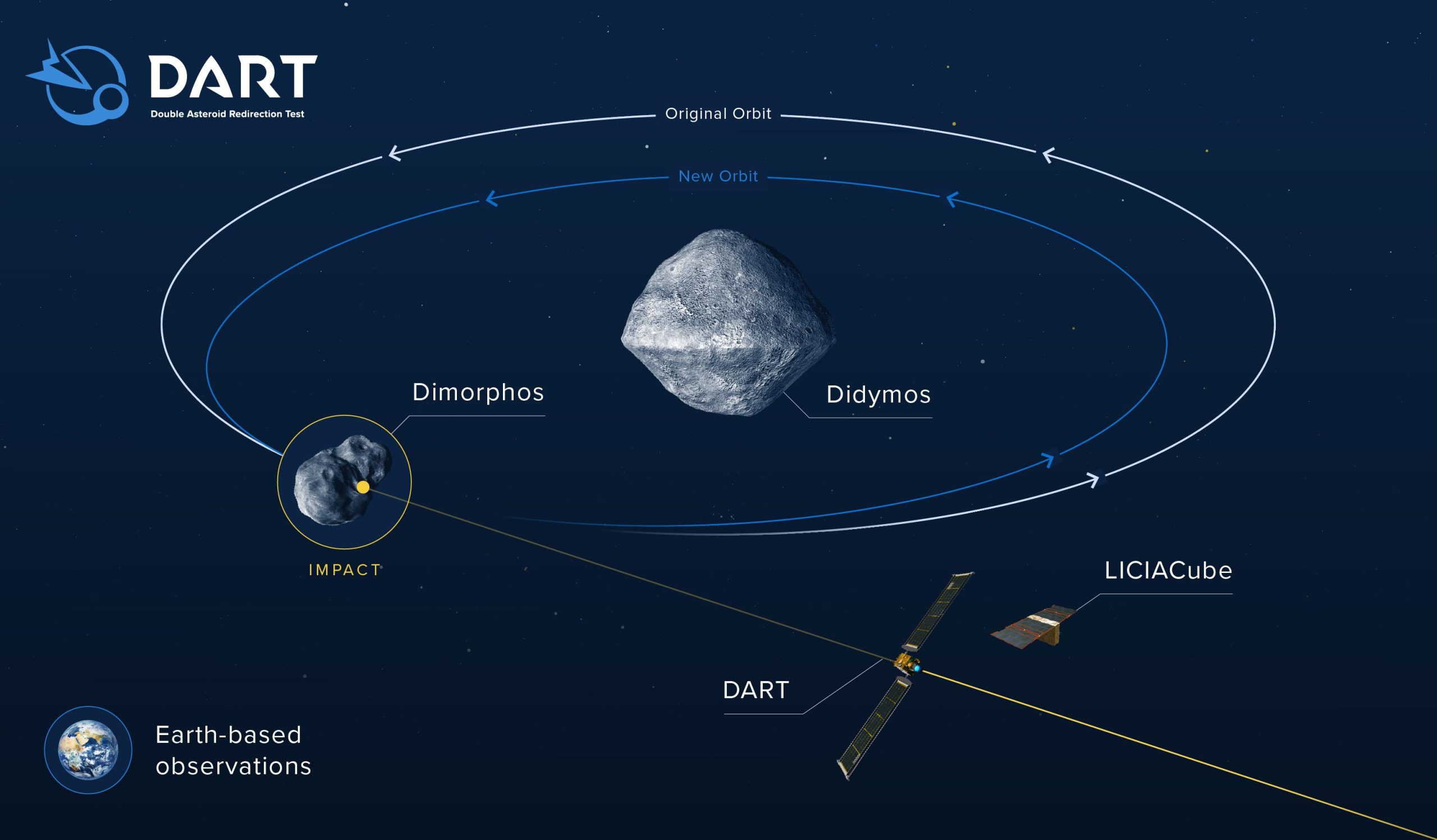 ONE of the more striking (pardon the pun!) of recent space projects came to the first stage of fruition on  September 26, 2022 when a small spacecraft crashed into an asteroid 11 million kilometers away from Earth. The US National Aeronautics and Space Agency’s (NASA) Double Asteroid Redirection Test or DART sought to deliberately hit the small asteroid Dimorphos with the objective of knocking it off its usual trajectory in a technology demonstration that could, someday, be used to actually deflect an asteroid from a collision course with Earth. This Mission, costing around $320 million, is part of NASA’s larger Planetary Defence programme, the subject of several sci-fi books and movies in which scenarios have included setting off nuclear explosions on incoming asteroids.

More realistically, even though chances of a large asteroid dangerously crashing into the Earth are quite low, the fact is that a massive asteroid Chicxulub did smash into our planet around 65 million years ago, probably leading to the mass extinction of dinosaurs and almost three-quarters of other species on Earth. It is therefore prudent to think about measures to ward off threats from asteroids. NASA and other agencies have found about 40 per cent of asteroids larger than 500 feet wide that could pose a threat to our planet and continues searching for others. In 2019, more than 19,000 near-Earth asteroids had been discovered and tracked, while 30 more are discovered each week.  NASA is also developing a space telescope called the Near-Earth Object Surveyor, likely to be launched in 2026, designed to identify potentially dangerous asteroids.

Whatever action is taken, early detection is clearly the first step, but the obvious question is, after detection, what? DART seeks to test and demonstrate one potential answer.

It needs to be clarified, first, that DART’s targeted asteroid poses no threat whatsoever to Earth but was selected to meet the requirements of a realistic test without undesirable side-effects. The target asteroid, Dimorphos (pronounced die-morfos, or two forms in Greek), is part of a paired-set with the considerably larger Didymos (pronounced di-di-mos or twin in Greek) around which the former orbits at a distance between centres of about 1.18k. The orbit of the asteroid-pair around the Sun does not intersect with Earth’s orbit at any point, so there is no chance of collision. Didymos is around 780 metres wide, whereas its orbiting moonlet Dimorphos is expected to be about 160 metres across, roughly the size expected to pose a serious threat to Earth, with mass of around 5 billion kg. The impact of the DART spacecraft, with mass of about 570kg when it crashes into Dimorphos, is expected to jolt it just slightly, altering its orbit by a small amount bringing it closer to Didymos, but with no effect on the latter, thus causing no major alteration in the larger gravitational balance in that region.

In the actual test, starting from launch on November 23, 2021 aboard a SpaceX (Elon Musk’s space company) Falcon9 rocket, the refrigerator-sized DART spacecraft seems to have hit the football-field sized Dimorphos almost head-on, at a speed of about 23,760 kmph and an estimated 17 metres from the selected impact site. As DART came close to the crash time, with insufficient time left for signals to be sent to and from Earth to the spacecraft to direct it accurately to the crash point, this operation was performed autonomously by DART’s on-board Didymos Reconnaissance and Asteroid Camera for Optical navigation (DRACO), a high-resolution imager and processor aided by a SMART Nav (Small-body Maneuvering Autonomous Real Time Navigation) system derived from earlier missile systems. When close enough, SMART Nav distinguished between the two asteroids, identified the target Dimorphos, steered DART towards it, and sent back images as the crash neared.

What Mission Control at the Johns Hopkins University Applied Physics Laboratory (JHUAPL), NASA’s lead contractor for the project saw, starting just a few minutes before the impact, was a series of second-by-second incredible close up views of Dimorphos, before the screen went blank. These shots showed a surface littered with small stones or rocks, leading the scientists to believe that the asteroid is a collection of rubble held together loosely by gravity.

It is still not known whether, or by how much, the orbit of Dimorphos has been shifted. First, a CubeSat or tiny satellite made by the Italian space agency (Light Italian CubeSat for Imaging of Asteroids or LICIA), which detached itself from DART fifteen days before impact and followed it closely, has taken a series of close-up and wide-angle photographs from a safe distance of about 1000km, and a fast fly-by about 55km away 3 minutes after impact. These photographs would capture the impact site and the wider environment, the dust and other material thrown up on impact, the resultant plume, perhaps even the crater, all of which would take a few days to reach back to Earth. Similar observations are also being made by the James Webb and Hubble telescopes and other deep-space observatories. Several terrestrial observatories, such as the Asteroid Terrestrial-impact Last Alert System (ATLAS) in Hawaii, have also already observed the dust and debris plume of the DART impact.

Over the next two months or so, measurements would be taken of the orbit of Dimorphos to assess the success of the project. The orbits of the binary asteroids are such that they are in eclipse when looked at from Earth i.e., are one behind the other. In fact, therefore, Dimorphos had never even been seen from Earth! The normal period of orbit of Dimorphos around Didymos has been estimated through Earth-based telescopes by measuring the variation in light as the binary-asteroids change their positions relative to each other. The same technique would be used in the coming days to estimate the new period of Dimorphos’ orbit after the impact, not just by NASA but by numerous collaborating observatories around the Earth. Preliminary estimates before the actual test were that a change in orbital time of 73 seconds would be deemed a success, although DART scientists hope for a larger change of about 10 minutes!

While the main “planetary defense” goal of the DART Mission, with echoes of famous and dramatic Hollywood movies, has understandably grabbed the headlines and most of the media coverage, the Mission also incorporates several innovative and important technologies, and involves multiple collaborating agencies and companies from both the US and internationally.

DART uses NASA’s NEXT-C (NASA Evolutionary Xenon Thruster-Commercial) solar powered electric propulsion system, rather than the conventional tiny rocket thrusters for the steering maneuvers to the final crash point. Thrust is produced by acceleration of ions or electrically charged atoms from the xenon propellant, improving upon earlier versions tried out in the Dawn and Deep Space 1 Missions.

Whereas the DART impactor craft itself is roughly a 1 metre cube, its main power source is a novel Roll-out Solar Array (ROSA) earlier demonstrated on the International Space Station in 2017. The flexible “wings” are rolled up during launch and, later in space, unfurl and straighten out to 8.5 metres length. This new version, flown in space for the first time by DART, would be used in future missions. Interestingly, a small portion of this solar array also demonstrates a new Transformational Solar Array with high-efficiency solar cells and reflective concentrators along the array length, delivering three times the power of current solar arrays. This may even obviate expensive nuclear power for electricity.

All in all, a very interesting technology demonstration for “planetary defence” with, undoubtedly, many further tests to come.