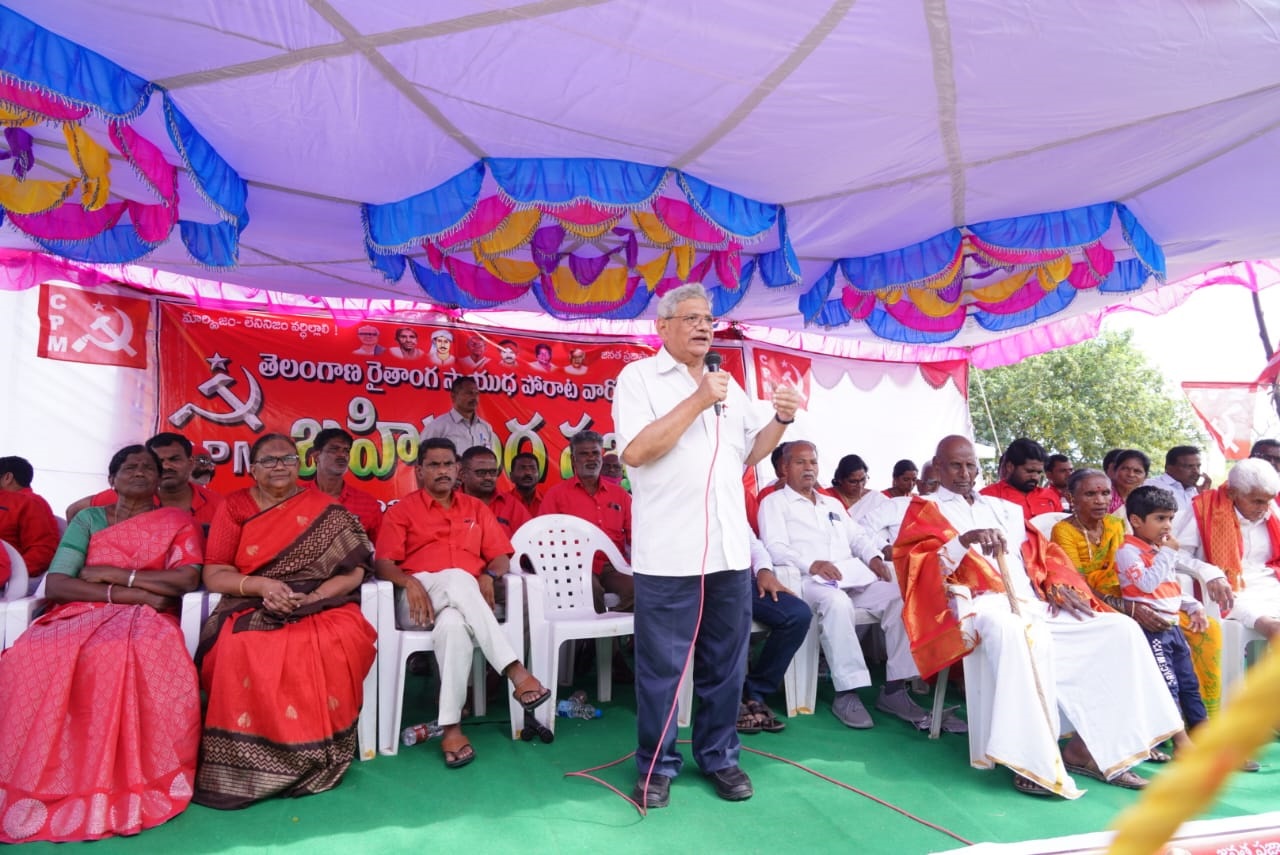 SITARAM Yechury, general secretary of the Communist Party of India (Marxist), and other leaders of the Party reiterated that it is the bounden duty of every patriot in the country to unitedly fight against and defeat the BJP government at the centre at the hustings to the Lok Sabha to protect secular democracy, religious harmony, the constitution and federalism. On September 17, the concluding day of celebration of the heroic armed struggle of the Telangana peasants, massive rallies were taken out and public meetings were held in Telangana on a large scale following the call given by the CPI(M). Recollecting the sacrifices made by the communists and peasants in that struggle, they paid rich tributes to the martyrs and called upon the people to fight unitedly with the spirit of the martyrs of the armed struggle.

Addressing massive public meetings held in Janagama and Miryalguda after participating in a rally, Sitaram Yechury came down heavily on the leaders of the RSS and BJP for distorting the history of the Telangana armed struggle and telling blatant fibs and pointedly questioned where were the leaders of these communal outfits in that glorious struggle. He asked why the union home minister, Amit Shah even while trying to depict the Telangana armed struggle as a struggle between the Hindus and Muslims in his address at Parade Grounds in Hyderabad was not referring to the fact that Raja Hari Singh of Kashmir refused to merge Kashmir in the Indian union then. Afraid as he was when Pakistan deployed its army, Raja Hari Singh approached the Indian government which imposed the condition that it would send its army if he agreed to the merger of Kashmir with India. The BJP government in Kashmir has announced the birthday of such a leader-Hari Singh, as a public holiday, Sitaram criticised. It is because Hari Singh was a Hindu and the ruler of Nizam a Muslim, the RSS-BJP leaders have been applying double standards in line with their communal obsession and are spreading lies depicting the armed struggle of the peasants as a struggle between the Hindus and Muslims. Yechury pointed out that after the assassination of Mahatma Gandhi on January 30, 1948, the RSS was banned by the government of India and RSS leaders were put behind the bars. After the police action "operation polo" started by the government in September 1948, Nizam announced the merger of Hyderabad state in the Indian union.

In the Telangana armed struggle, under the leadership of the communists, the poor fought against the oppression and exploitation perpetrated by the dictatorial Nizam, zamindars and deshmukhs and more than 4,000 communists and peasants sacrificed their lives. Yechury felicitated Darja Naik and Akkinapalli Tirupathaiah and his wife who participated in the Telangana armed struggle.  M Anasuya, K Satyavathi, G P Lachayya and B Guravayya - lit the flame of the martyrs and recollected their sacrifices.

Criticising the bankrupt economic policies being pursued by the Modi government and the way in which it has been utilising every occasion to divide the people into communal lines, Yechury expressed serious concern on the attacks being made by it on the basic constitutional principles of federalism, economic self-reliance, secular democracy and social justice. Underlining that defeating the BJP and forming an alternative government at the centre is the bounden duty of the secular parties, he made it clear that the leader of such an alternative government would be decided after the elections. Our elders fought for the country's independence and self-reliance. Along those lines, the youth of the country should gird up their loins for the protection of the constitution and democracy, Yechury said. Member of the Central Committee of the Party, Ch Sitaramulu, state secretariat members, J Ranga Reddy, D G Narasimha Rao, Mallu Lakshmi, Mohammad Abbas, G Raghupal, B Hymavathi, M Sudhakarreddy, M Kanakareddy and several leaders participated in the rally and public meetings.

A Vijayaraghavan, member of the Polit Bureau of the CPI(M), asserted that, with the spirit of the Telangana armed struggle, united and militant movements should be developed and alternative politics be taken forward to protect democracy, secularism, rights of the states and the constitution and for solving the problems of the people, farmers and the workers. Explaining the achievements of the Left, Democratic Front government in Kerala, he made it clear that the Left government is the alternative. He was addressing a public meeting at Tank Bund organised by the Greater Hyderabad central city committee of the CPI(M) to mark the concluding programme commemorating the Telangana peasants' armed struggle. He and other leaders garlanded the statue of Ilamma at lower Tank Bund and of Makdhoom Mohiuddin at Tank Bund and paid homage.

Vijayaraghavan explained that the entire land in Kerala is in the hands of 96 per cent of families and that there are no landlords there and that it is possible because the red flag has been there in the government. He explained that, in Kerala, digital education is being provided to the poor students in the government schools, the Left government took a number of steps and provided better medical facilities to the people during the period of Covid, it has been constructing houses for one lakh people every year spending Rs10 lakh per unit. Earlier, there was only one MLA for the BJP in the Kerala legislative assembly. On the call given by the chief minister, Pinarayi Vijayan, the people defeated the BJP in the Assembly elections and it has no representation there, he pointed out. The Modi government has been hatching a conspiracy to bring down the Kerala government, he criticised. As in Kerala, a progressive change should be brought about in the country in education, health, infrastructural facilities and human development and to achieve it red flag government should be formed in the country, Vijayaraghavan said.

He came down heavily on the Modi government and the RSS-BJP for their divisive politics and spreading blatant lies about the Telangana armed struggle. He taunted that the 'double engine' government meant Modi-Shah, Adani-Ambani, RSS-BJP. The so-called double-engine government has been anti-people and pro-corporate and working for Adani and Ambani, he said. The Modi government misused the ED and CBI to buy opposition MLAs and through such undemocratic means, the BJP came to power in states like Maharashtra, Karnataka and Madhya Pradesh, despite getting defeated in the elections to the legislative assemblies of those states. State secretariat member of the CPI(M), T Jyothi, and senior leaders, SarampallyMallareddy and Nandyala Narsimha Reddy, called upon the people to teach a fitting lesson to the BJP and chase it away from the state. Several leaders of the party participated in the public meeting which was presided over by M Srinivas, secretary of the Greater Hyderabad central city committee.

AT ARUTLA AND SANGAREDDY

Thammineni Veerabhadram, secretary of the Telangana state committee of the CPI(M), criticised the BJP for trying to hijack the Telangana armed struggle of the peasants, and conspiring to conceal the factual history of that struggle, while the role of the RSS-BJP in the national movement for independence of the country and the Telangana armed struggle was nil. Addressing  public meetings at Sangareddy and Arutla in Ranga Reddy district on September 17, he pointed out that the Telangana armed struggle was carried out irrespective of caste and religion against landlordism and the system of bonded labour. Veerabhadram explained that, during the armed struggle which went on for nearly two years, all the estates in Telangana came under the control of the communists and recollected that the then Congress government, afraid as it was that the Hyderabad state under Nizam also would go into the hands of the communists, deployed its army and got the Nizam ruler surrendered and provided him regal privileges, instead of incarcerating him. Even after the surrender of the Nizam ruler, the Indian armed forces continued in Telangana for three years for suppressing the communists and gave possession of ten lakh acres of land, which was distributed to the poor during the armed struggle intensified after the martyrdom of DoddiKomarayya. Earlier, the leaders garlanded the statue of B R Ambedkar and paid homage to the martyrs of the Telangana armed struggle. John Wesly, member of the state secretariat of the CPI(M), district committee secretary, K Bhaskar and other leaders participated in the meeting.

Addressing another public meeting held in the district headquarters of Sangareddy, Veerabhadram warned that the saffron politics of the BJP would not work in Telangana, though it has been trying to whip up communal tensions with a mischievous intention to gain political benefit. To rebut the dangerous policies of the BJP ideologically and defeat it, the CPI(M) is extending its support to the TRS in the bye-election to the Munugodu assembly constituency he explained and made it clear that because of that support struggles of the people would not stop. Even now the issue of land has been continuing in Telangana and the CPI(M) has been fighting with the slogan of land to the tiller. State secretariat member of the CPI(M), Chukka Ramulu, district secretary, G Jayaraju and other leaders participated in the public meeting.

Seminars, meetings and demonstrations were held in all the districts across the state in view of the anniversary celebrations of the Telangana peasants' armed struggle. The state secretariat members and state leadership participated in the programmes held in the districts.