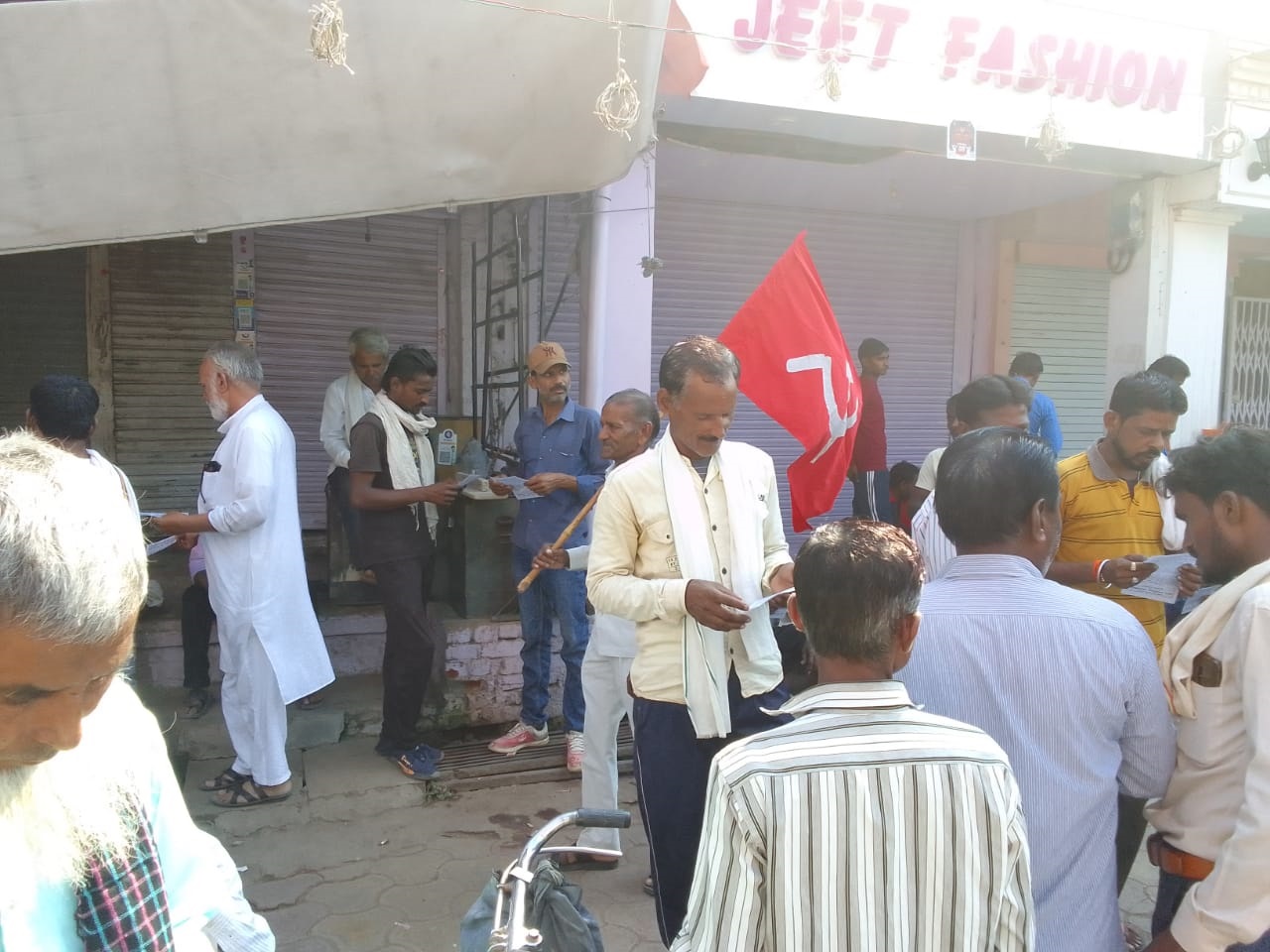 Onwards with the September Campaign

THE Central Committee of the CPI(M) has called for a mass campaign throughout the country on the major issues facing the people like price rise, unemployment, livelihood of farmers and agricultural workers, against privatisation and attacks on the working class and the overall onslaught on democracy and democratic rights by the Modi government.

This campaign from September 14-24 will concentrate on taking these issues to the people and the demands and alternative policies required to solve these problems. During the campaign, the pro-people alternative policies of the Kerala LDF government will also be highlighted.

The problem of price rise is the most acute for the people. The latest figures of August show that retail inflation has again touched 7 per cent with wholesale inflation continuing to hover around 15 per cent. The biggest contributor to rising inflation has been the high level of petrol and diesel prices which is caused by the high level of central taxes on petroleum products through various cesses and surcharges. At present the centre is collecting around Rs 28 per litre on petrol and Rs 22 per litre on diesel, and this is after the reduction of cess by Rs 10 in April last year.

During the last fiscal year of 2021-22, the union government collected more than Rs 4 lakh crores through cess on petroleum products. This reliance on raising revenue through taxing petroleum products is because the Modi government refuses to adequately raise taxes on the corporates and the super rich. Due to this class policy, the people are being squeezed for garnering more revenue.

If people have to get relief from the incessant price rice, it is essential that the government withdraw the cess and surcharge on petroleum products. It must also withdraw the 5 per cent GST rate levied on packaged food articles like atta, milk products and other food items.

The biggest failure of Modi government in the last eight years has been to ensure sufficient generation of employment. This is a government which promised to create two crore jobs every year. There is severe unemployment especially among the youth. According to the Centre for Monitoring Indian Economy (CMIE), in the age group of 20-24 years the unemployment rate is a staggering 42 per cent.

Among the urgent steps needed to be taken is to create jobs, to fill up nearly 10 lakh central government jobs. Every job seeker under the MNREGA must be provided work. From April to July this year, 20 per cent of the 7.26 crore job seekers under the MGNREGS, i.e., 1.47 crore job seekers, were refused work. There is a huge backlog in unpaid wages due from 2021-22. This must be cleared. What is required is an increase in the number of working days and wages in the Rural Employment Guarantee Scheme. At the same time a National Urban Employment Guarantee Act needs to be adopted at the earliest.

The Modi government is undertaking a large scale privatisation drive of public sector enterprises. Since 2014, the central government has sold off Rs 3.63 lakh crore worth of assets of public sector enterprises (either fully or partially). This has led to a loss of jobs and provided a bonanza and enriched the corporates, both Indian and foreign. Intensifying this drive, the BJP government has set out a National Monetisation Pipeline (NMP) aimed at garnering Rs 6 lakh crores by handing over huge infrastructure assets of the country to private corporates. The Electricity Amendment Bill, if passed, will lead to privatisation of power distribution and result in big hikes in electricity charges.

This assault on the public sector is accompanied by the attack on working class rights through the legislation of four labour codes which enshrine hire and fire rights for employers, allow increase in working hours, change the way minimum wages are fixed, and impose restrictions on organising labour and virtually abolish labour law implementation machinery.

The September campaign will educate the people on the perils of privatisation and how it will affect their basic rights and mobilise them to support the ongoing struggles against privatisation.

After the historic kisan struggle which led to the withdrawal of three farm laws, the issue of providing legal basis for MSP for different crops and the growing burden of debt remain. For the agricultural workers, wages remain low and the availability of work has gone down considerably.

The campaign will focus on the demands of the kisans and agricultural workers which include the State support for agriculture and development of rural infrastructure.

All these problems stem from the neo-liberal policies of the Modi government which is also connected to the full scale assault on democracy and democratic rights of the citizens. The Modi government pushes through its right-wing economic policies and the communal agenda through the institution of a full-fledged authoritarian regime.

Every democratic right and civil liberties of citizens are being violated with impunity. Political workers, social activists and journalists are being targeted by the use of draconian laws like the UAPA and sedition clauses. The central agencies like the ED, CBI, and Income Tax are utilised against opposition leaders and opposition state governments; the rights of minorities, dalits, adivasis and women are under attack. Parliament is getting denigrated and the opposition members of parliament are unable to raise issues and speak out. The subversion of all constitutional bodies is proceeding apace. The campaign will focus on the defence of democracy and protection of democratic rights of citizens in all spheres.

While putting forth the demands of the working people and calling for the defence of democracy, secularism and federalism, the Party will also project the alternative policies to the neo-liberal Hindutva regime. The record of the LDF government in the past six years will be highlighted – how the LDF government has strengthened the public educational and health systems, how Kerala has the lowest rate of inflation among all states in the country due to its effective public distribution system and network of Maveli stores, how the LDF government is reviving and turning around public sector units instead of closing them, how Kerala provides highest minimum wages for both industrial and agricultural workers.

The September campaign is being conducted at a time when there is a growing urge for building opposition unity against the BJP and the Modi government. Various opposition leaders are making efforts to forge opposition unity. The awareness that united opposition to the BJP rule is necessary has also grown because of the various united struggles that have taken place in the recent period. The united kisan struggle led by the Samyukta Kisan Morcha (SKM) and the growing united resistance by the Central Trade Unions and other united struggles in different states have contributed to this urge for a united opposition.

The efforts being made to have the broadest united platform against the BJP will succeed only if there is wider unity in struggles of different sections of people on issues affecting their lives. These are not only issues confined to people's livelihood and economic issues. There has to be widest united platforms developing in defence of democracy and secularism. The September campaign is an independent campaign of the Party which will contribute to building unity of the people across various platforms.