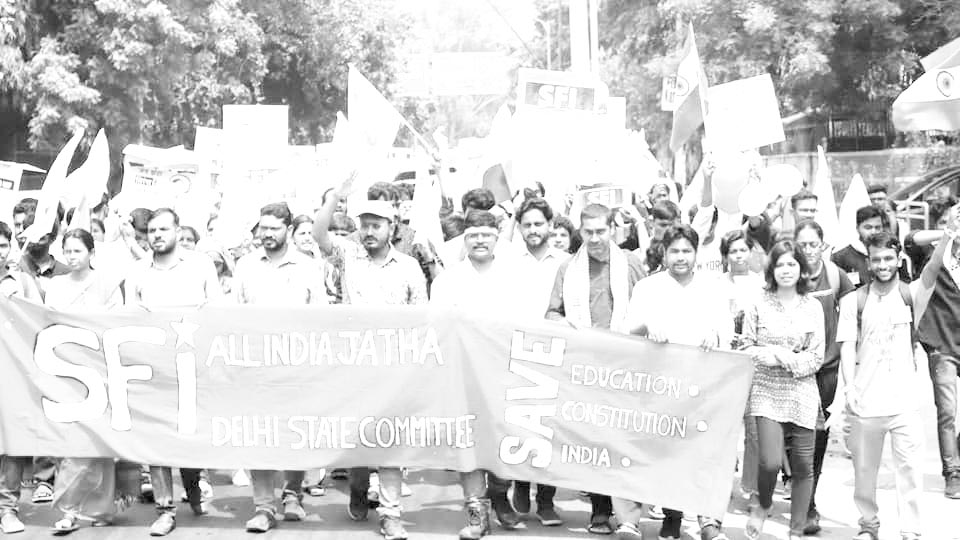 March for Education: March to save India, save its Constitution and Education - 1

THE little soul only wanted water. And for that crime, a 9-year-old child of Rajasthan, Indra Kumar Meghwal, was the victim of the anger of the upper castes. In a school  run by the RSS, the Saraswati Vidyamandir. Dalit children getting murdered in RSS-run schools, that is the objective reality of education and social and economic justice in India, at the eve of 75 years of independence. Even after so many years of independence, this is the real picture of the country where even drinking water can be considered as a crime leading to murder of a child, leave alone the promise of nectar.  Therefore, the challenge of SFI All India Jatha was to fight for everything that the independence of India stood for, from our constitution to our public education system, from the idea of India to socio-economic justice for our people.

Due to the lack of teachers, infrastructure, the education system of our country is facing a dark phase of both negligence and indifference. According to the 2021 survey, the teacher-student ratio in India is now 1:47 in upper primary. So it is easily conceivable how the work of shaping the future of the country is going on. Such discrimination in terms of student-teacher ratio is naturally affecting the regular learning process of the students.
The constitution states that the right to education is a fundamental right of a citizen. But this situation is completely functioning in contrast to the promises made by the Right to Education Act. The recruitment system is systematically dismantled and intentionally broken. The regularity and discipline of school education is completely disrupted. Not only schools in the remote areas, but also in the megacities, the picture of student-teacher ratio of public educational institutions is in a dire state. In many upper primary schools only one or two teachers are responsible for teaching hundreds of students spread across multiple batches.

Teachers have to be almost superhuman in order to run the schools efficiently with almost zero infrastructure, human resources and unavailability of teaching-learning Materials. In many cases, when that lone teacher goes on leave, the group-D staff of the school has to take classes! Sometimes a temporary solution is tried by hiring part-time teachers. As a result, quality education is taking a beating. Many students are almost illiterate, even after several years of schooling.  They can't do the basic calculations. The situation got even worse during the Corona period, putting strain on an already dilapidated infrastructure. The problem of digital divide further aggregated the situation for marginalised students. Schools, colleges and universities were closed for months primarily, which later got extended to almost a 2-year break. As a result, almost no formal education has been imparted in schools and colleges for a two-year period, which has also led to very low levels of socialisation and social education among the students.

The collective understanding and resonance of the student community has taken a huge blow in the past 2-3 years.  The government's responsibility towards the student community at large, in terms of ensuring their right to education and their right to work has become a thing of the past now. Students and Youth of our country want quality education and proper employment from the Government and not Scams and distractions from actual issues, which the Government of India under BJP has been orchestrating.

There are not even enough classrooms or physical infrastructure required for formal schooling anywhere in our country, as predicted by the people, voluntary organisations, or various reports. This shows the poor state of education in India. Classes are often held under trees, which get disrupted by drying the monsoons or extreme weather conditions. Despite the much promoted and advertised "Swachh Bharat Abhiyan" , the sanitation facilities are far worse than expected, which forces the girl students, especially, to drop out of schools. In Bihar, many students don't even know about formal education in college and usage of public or institutional libraries. Only 57 per cent of students have passed the matriculation exam in Assam. Majority of these  students who have passed are from private schools. In Assam's 164 government schools, not a single student has passed. There are 16 teachers and one student in a school in Nalbari district. He too has failed! There are not enough teachers in schools in BJP-ruled Tripura. As a result,  classes are held only three days a week, according to the government reports only. Meanwhile, almost all science departments in most colleges in Tripura have been closed, due to lack of faculty as well as investment in required physical infrastructure of classrooms, libraries and laboratories.

While the children from privileged backgrounds will go to international schools in AC cars, and the children of workers will be brought up like slave-labourers, only to end up being profit-maximising machines for the Large business houses.

The overall picture of education in the entire country is that there is great unavailability of teachers in the educational institutions, but there are no students even if there are teachers. Mid day meals are not regularly distributed in most cases. The number of students entitled to mid-day meals and the actual number of students who get these meals show a huge gap. But there is no alternative to the mid-day meal scheme to bring children from poor families to school. Professor Amartya Sen has repeatedly emphasised this. But since the start of 'Modi raj', the funds allocated for mid-day meals has decreased at an increasing rate.  Meanwhile, the cost of vegetables, eggs, oil, spices and fuel has increased. But the government is indifferent. Modi can buy a whole plane for foreign trip, but less than five rupees are allocated for the children's mid-day meal. It doesn't even contain eggs. And there are these RSS backed NGOs who have come in to hand over the mid-day meal to private hands. Only vegetarian food is being provided in Karnataka, leading to deprivation of many students from the minimum necessary amount of protein that children and adolescents need.  It has also saved the cost of the private babu, and the touch of Hindutva has been reignited and consequently retained. SFI has fought against it. Eggs have to be provided with mid-day meals. In fact, it is not just a story about eggs. It is the right of the entire nation to have necessary nutritional qualities, obtained from proper diet. Efforts should have been made to bring children to the field of education. Instead, the cumulative effect of the policies of the BJP government is that students are being forced to leave formal schooling. Again, there are no proper toilet-drinking water systems in most of the schools. The government is not investing enough for the sake of development and maintenance of these infrastructural requirements. Conscious parents are forced to resort to private schools, or tuition, at a much higher cost. In this case, the policy of 'money buys education' becomes the last word. In such a situation, SFI fights for the cause of immediate need to restore the educational environment in government and government-aided educational institutions. Otherwise the disparity and the gaps will widen. Education has already suffered a lot during the covid pandemic due to negligence of the GOI. Government expenditure on education in India is low not only in terms of India's necessities but also by international standards. It has worsened under Modi Raj.

The National Education Policy which was passed in the dead of night on July 29, 2020, without any discussion in the Indian parliament during the pandemic period is one such attempt in replicating such brainwashing machines. While implementing this policy the Modi government has not listened to any teacher or student organisation/association/union except the RSS and some petty corporates. The core philosophies of this NEP are– privatisation, intense centralisation and communalisation. Today its influence is seen in one state after the other , especially since its implementation in the 2022-23 academic session. It is being practiced in different forms, under the supervision of the RSS and at the behest of the corporate. Thousands of schools in rural and urban slums are being closed in Karnataka, Madhya Pradesh in the name of opening school complexes, as prescribed in the NEP. Around 100 'Vidyajyoti Schools' have been selected in the name of providing better education in Tripura. But it will increase rural-urban, tribal-Bengali discrimination. The central government's intervention is increasing at the cost of weakening the state boards everywhere. Four year graduate courses are being launched, casual professors are being appointed without any educational qualification, fees are increasing to extreme levels ,which will create a domain of exclusive educational facilities instead of an inclusive and accommodative public education system.

The new National Education Policy says that the institutions will implement online education and introduce a blended mode of education (offline and online together) to improve education. But the annual status of education report (ASER 2021) says otherwise. Most of the rural students could not take these online educational services, because of the lack of proper digital and physical infrastructure . The lockdown in the country during the Covid period and the accompanying economic crisis in the country has brought down a big blow on the marginalised families of the country. Already there was a dire situation in the education and  health sectors of the country, especially in terms of penetration of usage of modern technology and instruments as well as internet services in these sectors.  There are no data services in most regions, buying a better phone or laptop has become an illusion. Whenever and wherever  internet services and hardwares can be afforded, they are too expensive for the common people.  Along with this, there are also regularised bans on internet usage in various parts of the country along with almost permanent bans in Jammu and Kashmir and North Eastern states of India. All of this has an impact on the learning processes and student's participation during the days of closed schools and colleges. This resulted in increased dropouts and child labour. The number of child marriages among female students has increased. Gender disparities in education have been evident during the pandemic, especially in online and blended mode education. While 42 per cent students can use the internet on mobile, only 21 per cent of female students can use the internet on mobile . This picture of misery is one of the harmful aspects of the implementation of national education policy in the country.

FIGHT BACK
Along with this, educational institutions were closed during Corona. Studying was going on in online mode only. But the fees had increased manifold, despite absolute non-usage of the physical infrastructures.
But, we would not let it happen this way, the way the unholy capitalist-Hindutva nexus has planned. Hence, we have geared up from Kashmir to Kanyakumari, Agartala to Ahmedabad , to crisscross our country with the slogans and banners bearing the motto of "Save education, Save Constitution, Save India" held and carried by our activists and general students . So, there is this glimmer of hope - SFI from Hooghly in West Bengal to Hanumangarh in Rajasthan has marched against the fee hike, along with the general students and their parents, with resounding victories.