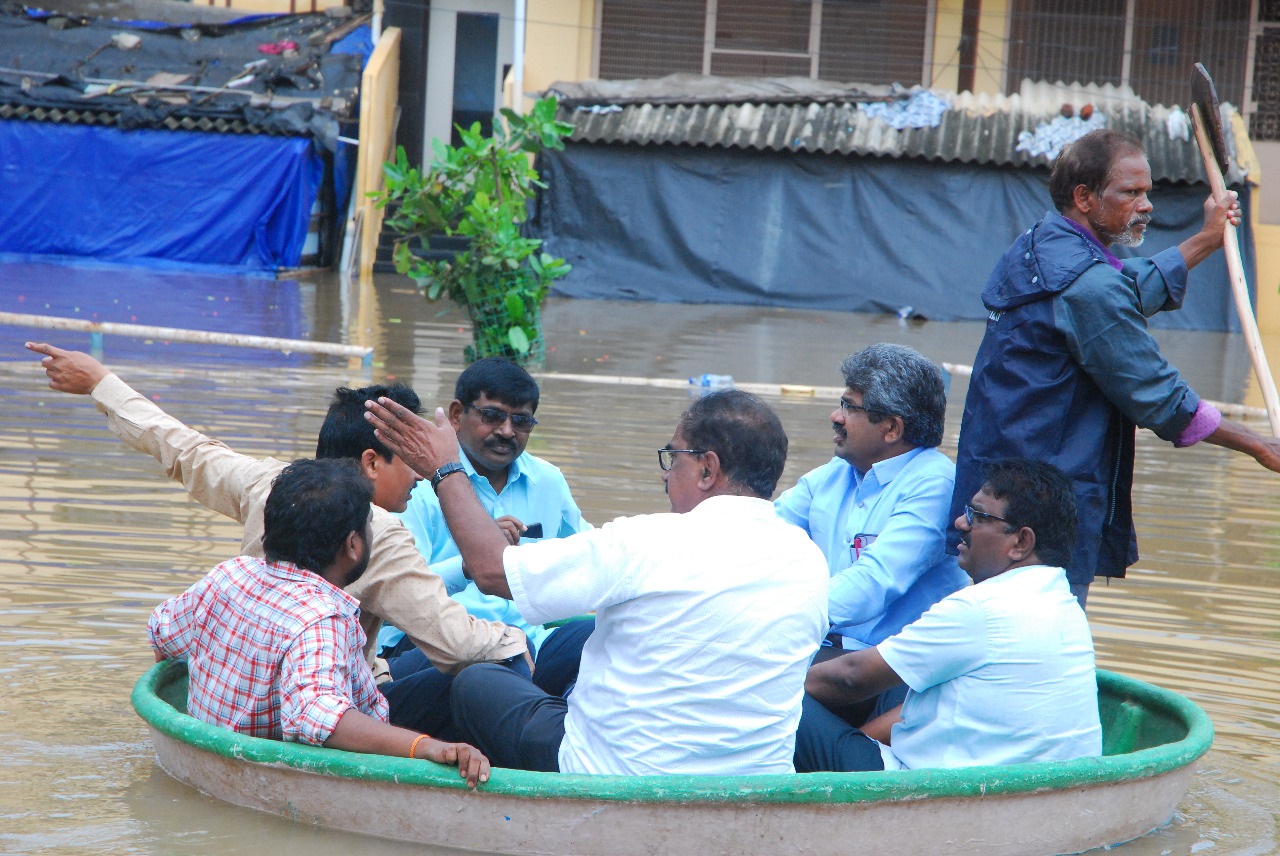 CYCLONE and monsoon rain between July 5-15 led to heavy precipitation. More than 44 per cent than normal rainfall was recorded during this period, particularly in the catchment area of Godavari. There was a heavy loss in the districts of Bhadrachalam, Khammam, Adilabad, Warangal, Nizamabad and Karimnagar.

Just a month had passed by since the Kharif crop was sown. The seedlings have been damaged. Nearly 11 lakh acres of the sown area have been damaged. Main crops include cotton, rice, soya, pulses, jowar, and oilseed crops. Eight people died so far because of heavy rains. Hundreds of miles of roads and houses were damaged. In the flooded areas, grass for the cattle, and drinking water for humans became scarce.

The flood bank around Bhadrachalam got damaged, and water entered the town. Most of the town got submerged in water. Sabari river from Odisha's side also was flowing in full spate. Because of the effect of backwater from the Polavaram project(under construction), villages in the mandals of Koonavaram, V R Puram, Etapaka, and Chintoor were submerged. These mandals were transferred to Andhra Pradesh. Neither the A P government nor the central governments have taken any relief measures in these villages.

In Bhadrachalam, crops got destroyed on 6000 acres of land. At the time of the chief minister’s visit, the area was submerged in 6 to 10 feet of water. Lakhs of displaced people are leaving villages. Many villages are under water.  The Kadem project in the Nirmal district got damaged by the floods.

The displaced people were provided rehabilitation centres by the government in some places only. Food, drinking water, and grass for the cattle, milk and daily needs were out of reach. In the villages that got submerged in the water due to floods, clothes, cooking utensils, and daily essential needs got damaged. The state government totally failed in providing alternate arrangements. About 10 lakh people affected by floods are suffering due to water shortages, food and living quarters.  In addition, there is the danger of infectious diseases spreading. The disaster management plan was hardly seen in operation.

The CPI(M) state secretary, T Veerabhadram, and secretariat member, P Sudershan along with local leaders toured Bhadrachalam town, Charla, Dummugudem mandals in Bhadrachalam districts in flood-affected areas on July 18. They visited the area in boats and enquired about the relief measures from the flood-affected people. They said that Bhadrachalam can be protected, only if the height of Polavaram is reduced.  Immediately the height of Karakatta (Godavari river wall structure)  of Bhadrachalam is to be increased and elongated.  The relief of Rs 10,000 declared by the government is in no way sufficient, and they demanded Rs 1 lakh for each flood-affected family.

The Party gave a call that cadre should go to flood-affected areas, organise relief for people and stand in support of them. It wanted relief in kind and cash should be collected from other districts and rendered to flood-affected people. The Party stood by the people in the affected areas. In different areas, Party workers participated in the relief work. The Party offices were used as rehabilitation centres. For hundreds of people, food was provided. Donations were collected through different trusts, relief programmes were organised. In the Bhadrachalam district, under the Bandaru Chanderrao trusts, and in the Nizamabad district,  blankets, food, vegetables and daily essential needs were supplied to flood-affected people at the call of the Party.