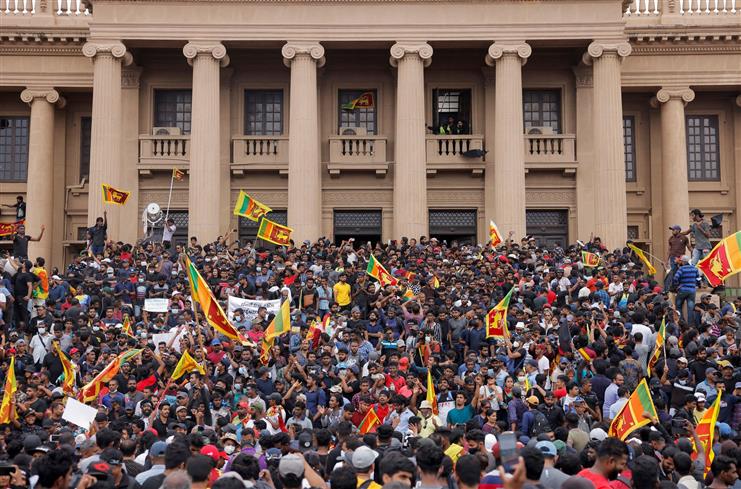 PEOPLE’S power was displayed in a spectacular fashion in Sri Lanka on July 9 when tens of thousands of people stormed the Presidential Palace, the President’s Secretariat and the official residence of the prime minister and took them over, sweeping aside the police and soldiers guarding them.

Men and women from all over the country, numbering at least two million, came into Colombo determined to end the authoritarian-corrupt rule of President Gotabaya Rajapaksa and the Rajapaksa clan.

Gotabaya Rajapaksa, after being spirited away from the Presidential Palace to a military base, announced that he would resign from the presidentship on July 13. On that day, in the early hours, Gotabaya fled the country in a military plane to the Maldives, thus ending one part of the people’s uprising against the hated Rajapaksa clan.

However, while leaving the country, Gotabaya appointed Prime Minister Ranil Wickremesinghe as the acting president. This was a last desperate maneouvre to keep some line of control over the State. Ranil Wickremesinghe had promised to resign as soon as an all-party government was put in place. This was obviously a delaying tactic to remain as prime minister till Gotabaya resigned, as the constitution provides for the prime minister to become the acting president in the absence of the president.

Wickremesinghe assuming the acting presidenship has enraged the people who see him as equally culpable as Rajapaksa for the mess the country is in. After all, Wickremesinghe who is the sole representative of his party, the UNP, in parliament was chosen by Gotabaya to head the cabinet after his brother Mahinda Rajapaksa was forced to resign on May 9.

Wickramsinghe has covered himself in infamy by acting as a lackey of Rajapaksa, declaring an emergency, calling on the military to do whatever is necessary to restore order and accusing “fascist forces” of trying to take over power.

But the indomitable will of the people was once again on display and they will thwart this move too by the ruling class elite. The protesting people marched to the prime minister’s office and in a repeat of the July 9 occupations, they braved hundreds of tear gas shells and eventually broke through and occupied the office.

The Aragalaya (struggle) began on March 31 when people from all walks of life gathered at the Galle Face Green, outside the President’s Secretariat, to protest against the severe economic crisis which has resulted in food shortages, lack of fuel and rampant inflation.

As the economy collapsed and the country defaulted on its foreign debt, the peaceful protest movement calling for Gota go gama (Gota go home) swelled in numbers at the encampments at the Galle Face and at Prime Minister Mahinda Rajapaksa’s official residence.

May 9 marked a turning point when Prime Minister Mahinda Rajapaksa’s thugs belonging to the ruling party were brought in to attack the protestors. The mass retaliation that followed saw the ouster of Mahinda Rajapaksa as prime minister.

The mass protest movement has seen two general strikes by the working class and the participation of all sections of society including leaders of all religious faiths.  The efforts to cling on to power by Gotabaya after May 9 saw the maneouvre to appoint Ranil Wickremesinghe as prime minister, who in a breathtaking act of opportunism, agreed to head a government dominated by the ruling party – the Sri Lanka Podujana Peramuna (SLPP). But this maneouvre only bought some short time for Gotabaya.

As popular discontent mounted, whatever legitimacy that the government had, got completely eroded with even the army, the police and the judiciary becoming unwilling to take any coercive action against the popular movement.

Sri Lanka had reached a dead-end after two decades of politics dominated by the Rajapaksa clan.  Earlier, Mahinda Rajapaksa, as president, had consolidated an authoritarian regime relying on Sinhala Buddhist majoritarianism.  The executive presidency became the instrument for concentration of power  and the creation of an authoritarian regime which had its own corrupt networks in the State institutions.

After Gotabaya Rajapaksa was elected president in 2019, the 20th amendment to the Sri Lankan Constitution gave wide powers to the executive president, which include total control over the appointment of senior judges and control over the election commission, the police commission and the commission to investigate bribery or corruption.   Along with his brother Mahinda Rajapaksa as the prime minister, the other brothers and family members were appointed to key ministries and positions.  75 per cent of the total budget was directly under the purview of Rajapaksa ministers.

The current economic crisis is not only due to the mismanagement of the economy and wrong policies but also due to the massive corruption involved in all spheres of economic activity.

As the all party meeting called by the speaker on 13th evening decided, Ranil Wickremasinghe should resign and the speaker should become the acting president. The armed forces should accept this constitutional step. A dangerous situation would arise if the army follows Ranil’s orders and cracks down on the protesters.

It will be a long haul to climb out of the morass in which Sri Lanka finds itself in.  Though much of the mainstream political class have lost credibility among the people, it is imperative that an all- party government with a consensus prime minister is formed.

The next step would be to amend the constitution to abolish the executive presidency which is the basic source for authoritarianism.

The way forward is strewn with various obstacles. The present parliament is still dominated by the SLPP of the Rajapaksas. Having a new president who can earn the confidence of the people is a big ask. There has to be fresh elections after six months. And finally, there is the thorny and difficult task of rebuilding the economy. The route chosen of an IMF bailout is ridden with harsh austerity measures which accompany any IMF loan.

The Aragalaya is far from over for the people of Sri Lanka.  But what they have achieved so far is a warning to the authoritarian regimes which flourish on ethno-nationalism and communal polarisation. However, stable and entrenched you may seem, the people will not forever remain in your thrall.  They will see through you, some time.