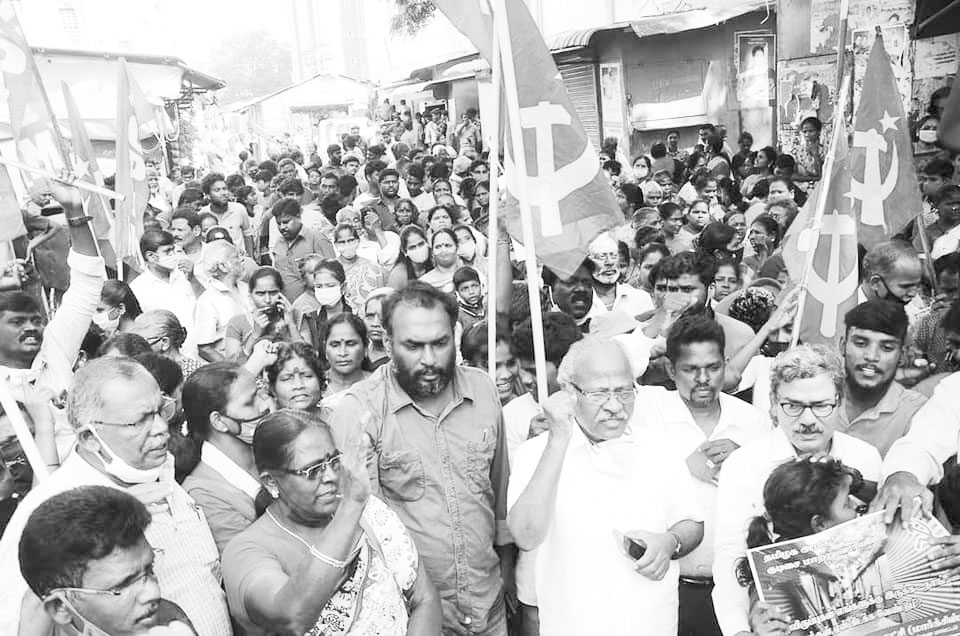 Victorious Struggle of the Homeless Poor in Chennai

CENTRAL Chennai district committee of the CPI(M) scored a decisive and path-breaking victory in clinching the rights of the poorest of the working-class people living in the heart of Chennai city after a two-year-long struggle. The historic struggle of the people has resulted in the overturning of several anti-people government orders notified by the previous AIADMK government. After the relentless struggle of the CPI(M) central Chennai district committee, the present DMK government has scrapped the GOs(Government Order) issued by the previous AIADMK government and new modified government orders have now been issued benefitting the poor and oppressed people.

Kesava Pillai Park (KP Park) area is a locality which is just two kilometres from the Chennai Central Railway Station – the heart of the Chennai city. In the year 1983, this sprawling area was converted into a residential complex by Tamil Nadu Slum Clearance Board (TNSCB). This multistoried residential complex had 35 blocks, housing the poor and oppressed section of people in Chennai. Over a period of time, these buildings in the KP Park were dilapidated and became unfit to live in.

In 2008, the first 14 blocks were demolished and new residential blocks were constructed and handed over to the concerned families. The state government planned to demolish the remaining 21 blocks and build a new apartment complex. In 2016 the state government promised to construct the new residential complex in a span of 18 months and hand over them to the 864 families already living in the old residential complex.  The Slum Clearance Board provided temporary accommodation for the poorest of the 200 families.

In the meantime, the G+3 building was demolished and constructed Stilt + 9-floor storey apartment complex having 864 houses and another Stilt + 11-floor storey apartment complex having 1056 houses in KP Park. Even after the completion of the construction, to the shock of the original dwellers, the 864 apartments were not handed over to them by the TNSCB. The agitated people of KP Park tenements raised the issue with the officials of the slum clearance board. But they refused to yield citing various reasons at the behest of the state government. Due to increasing pressures from the intended families, the board gave oral assurances that the residential complex will be handed over to them before January 26, 2020. This too did not materialize.

When the Covid pandemic struck Chennai, most of the residents of the KP  Park were engaged as frontline workers by Chennai Municipal Corporation. During the course of their duty, many of these workers contracted the infection. The state government suddenly announced the setting up of a Covid care centre in the newly built apartment complex. This announcement completely rattled the families who were expecting to move to the new complex.  The continuing distress due to the pandemic and government announcements evoked widespread fear of permanent loss of habitat among the families. In a swift move, the government set up the COVID care centre in the new complex.

CPI(M) KP Park party unit immediately approached the authorities with petitions pleading for restoring the apartment complex to the concerned families. All these efforts proved futile.

G Selva, district secretary of CPI(M) filed a case in Madras High Court on behalf of the KP Park dwellers seeking allotment of houses to the concerned families in the 864 houses. In May 2020, the court ruled that the dwelling units in the newly built apartment complex shall be allotted to the beneficiaries and directed the state government to file a report on the health conditions of the people living in the tin sheet as temporary hutments in KP Park. But the government delayed the process and filed the report only in September 2020.

During this period of struggle by dwellers of KP Park, another similar incident of eviction of poor people emerged in the heart of Chennai city. Thousands of slum dwellers residing on the banks of the Cooum River (Sathyavanimuthu Nagar) which flows through the city, were forcibly evicted on December 29, 2019. When the officials of the public works department with the help of police started razing down their huts using bulldozers, protests erupted in retaliation. Asaithambi, unit secretary of CPI(M) was severely beaten up by the police during the protests. Upon hearing the incidents, K Balakrishnan, state secretary of Tamil Nadu CPI(M) rushed to the spot and held talks with the officials. The eviction was temporarily halted. But taking advantage of the fear among the slum dwellers, the authorities began removing the slum dwellers to a locality called Perumbakkam, which is located 40 kilometres away from the city ignoring the appeals by the slum dwellers.

On December 4, 2020, CPI(M) Harbour area committee conducted a massive demonstration in front of the Chennai collectorate and the slum dwellers submitted petitions enclosing documents proving their residence in Sathyanavanimuthu Nagar. The authorities quickly grasped the mood of the people and again started demolishing the slums along the Cooum banks. Immediately CPI(M) cadres and the public started agitating against acts of the authorities. While this was happening, some of the slum dwellers entered the Cooum River as a form of protest, which carries the sewerage of the entire Chennai city and asked the authorities to stop the eviction. This protest was broadcast live on various TV channels. In spite of the vast media coverage given to the protest, the authorities did not even care to visit the spot.

Subsequently, G Selva, along with noted film director, Pa. Ranjith, met the then deputy chief minister,  O Panneerselvam and urged him to drop the government moves to relocate the slum dwellers to the outskirts of the Chennai city. Despite the assurances of the deputy CM, authorities continued to demolish the slum dwellings with the help of the police. This was strongly objected to by the activists of CPI(M). The police immediately arrested CPIM() district leaders, R Murali, S K Murugesh, E Sarvesan, M V Krishnan, R Kumar, S Manjula and also Gopi Nainar, a noted film director who physically extended solidarity to the agitating slum dwellers. The huts were demolished leaving the slum dwellers homeless and facing an uncertain future. About 2000 families residing along the Cooum river were forcibly relocated to Perumbakkam, 40 km away from Chennai city. But defying the authorities, 178 families continued to live in Sathyavanimuthu Nagar braving the pandemic, scorching heat and massive rains with the help and support of CPI(M).

Responding to an RTI query filed by the CPI(M) leader Abu, the government replied that the KP Park original dwellers of 864 families will be allotted houses in the newly built 864-housing complex and the 1056 newly built dwelling units would be allotted to the slum dwellers being evicted from the banks of Cooum, Buckingham and Adyar rivers flowing through the city.

A CPI(M) delegation led by G Ramakrishnan, Politburo Member and G Selva, met the then deputy Chief Minister O.Panneerselvam and submitted a memorandum placing the above two demands. On February 17, 2021, a powerful demonstration was held by the CPI(M) before the district collector's office reiterating both the demands.

On February 5, 2022, officials began the allotment process by drawing lots in the presence of the local DMK MLA, and K Murugan, secretary of the CPI(M)  Egmore committee. But to the shock of beneficiaries, Slum Clearance Board announced that each allottee should pay a sum of Rs1,50,000 before allotment citing some government orders. CPI(M) leaders questioned the rationale behind the demand of Rs 1.5 lacs. The authorities refused to reply saying that the Legislative Assembly elections are around the corner.

After the assembly elections, the newly elected DMK government-appointed new officers to the Slum Clearance Board. CPI(M) leaders approached the joint MD of the board and urged him to drop the move of collecting Rs.1.5 lacs from the allottees.

Knowing that the GO for collection of Rs 1.5 lacs would be applicable and affect all the dwellers of the TNSCB, CPI(M) Central Chennai launched a massive pamphlet distribution propaganda protest, “Kalaiyum Karunanidhi Kanavu” (Dissolving Karunanidhi’s Dream) which explained the idea of former DMK chief, Karunanidhi in forming TNSCB. CPI(M) leaders led by G Ramakrishnan, U Vasuki, P Shanmugam, K Samuelraj, S Valentina and Deepa participated in the agitation which attracted a large number of people.

In a few days, the government relented and issued orders to allot houses to the 864 families in KP Park. A much bigger struggle was launched demanding that the GO asking for the collection of Rs 1.5 lacs should be withdrawn immediately. The DMK government finally yielded to the massive struggles led by CPI(M) and withdrew the order. It is worthwhile to note that the government in its fresh order, had admitted that due to continuous struggles launched by the people, it was not able to collect the amount from the beneficiaries.

Simultaneously, CPI(M) district committee approached the DMK government and submitted petitions to DMK minister and constituency MLA,  P K Sekar Babu to allot houses in the new complex at KP Park. On April 29, 2022, CPI(M) laid siege to the offices of the Tamil Nadu Slum Clearance Board (now known as Tamil Nadu Urban Habitat Development Board). In this struggle, the officials held talks with CPI(M) leaders along with slum dwellers and assured that within one month houses will be allotted to 178 families. Massive struggles forced the authorities to realise the justice behind the struggles of the poor slum dwellers.

The GO issued by the previous AIADMK government to relocate the slum dwellers to Perumbakkam, 40 km away from Chennai city was withdrawn and a new GO was issued to allot houses to the 178 families of Sathyavanimuthu Nagar slums in the newly built 1056-housing complex at KP Park, which is just 2 km from Sathiyavanimuthu Nagar.

The long and protracted struggles led by CPI(M) were initially ridiculed by many saying that the demands put forth are not feasible. The consistent and militant struggle in all forms led by the CPI(M) along with understanding and analysing the concrete situation of the issue involved combined with appropriate forms of struggle involving the affected people produced a great victory for the people and CPI(M).