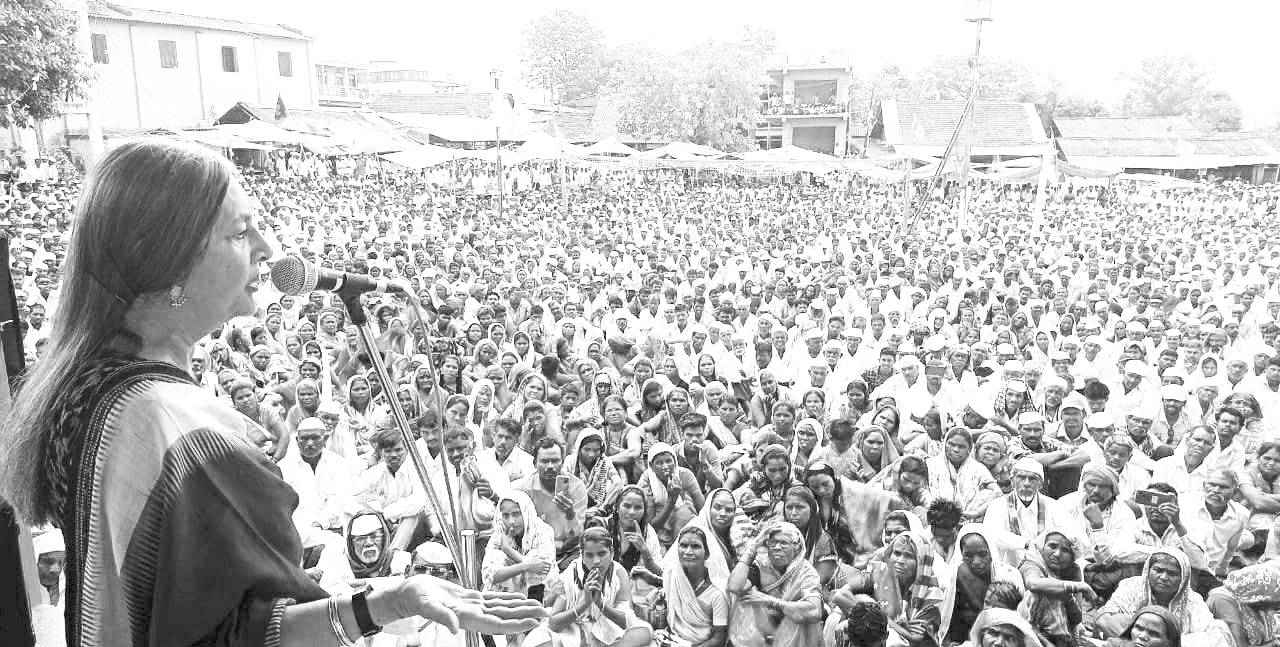 ON June 12, 2022, a massive 10,000-strong rally and a public meeting was organised by the CPI(M) and AIKS at Umbarthan, Tehsil Surgana, district Nashik in Maharashtra. The meeting comprised an overwhelming number of Adivasi peasants. They came mainly from Surgana tehsil, but there was also good representation from other tehsils in the district. The DYFI and AIDWA had also mobilised for the rally in strength.

June 12, this year was the 35th anniversary of the martyrdom of Comrade Laxman Bagul, who was killed at Vanganbari in Surgana tehsil in police firing in 1987, in a valiant struggle against eviction from forest lands. It was to commemorate his martyrdom and to give a call for struggle on burning peasant issues that this rally and a public meeting were held.

One and a half months ago, in April 2022, the DYFI Maharashtra state conference and rally were also successfully held in the Surgana tehsil of Nashik district.

After the historic AIKS-led kisan long march from Nashik to Mumbai in March 2018, the state government was forced to speed up the implementation of the Forest Rights Act (FRA), especially in districts like Nashik, Thane-Palghar and Ahmednagar, where the AIKS has led a constant struggle. However, tens of thousands of claims from Adivasi peasants are still pending. In thousands of cases, the size of the forest land pattas given is far less than what the peasants have been cultivating for generations. Worse still, in the 7/12 land records even in cases where land pattas have been given, the owner is still shown as the forest department and the peasants’ names are included in the column of other rights. The quality of land in the records is shown as ‘uncultivable’, while the peasants have been actually taking crops from it for years. All this makes it impossible for the peasants to avail themselves of any government schemes or bank loans.

Thousands of applicants have not been given houses under the PM Gharkul Scheme, in spite of meeting all the necessary requirements. The paltry amount sanctioned under the scheme is also not enough to construct a house. In spite of massive unemployment, the implementation of MGNREGA is extremely poor, due to a lack of funds from the central government. The astronomical price rise of petrol, diesel and gas is hitting all sections of the people. These were some of the issues that were highlighted in the public meeting.

Brinda Karat, Ashok Dhawale and J P Gavit in their speeches strongly attacked all aspects of the anti-tribal, anti-people and anti-national policies of the BJP-RSS Modi government. They deplored the failure of implementation of the Forest Rights Act (FRA) by the Maha Vikas Aghadi (MVA) state government. They also came down heavily on the communal and divisive conspiracies of the BJP-RSS and the Sangh Parivar and called for an extensive and effective mass campaign against the communal danger.

Statewide local body elections in Maharashtra to district zilla parishads, tehsil panchayat samitis, municipal corporations, municipal councils, and also several gram panchayats, will be held in the next three or four months. A call was given in the rally to greatly strengthen the Party and all the mass fronts in preparation for these crucial elections.

The public meeting gave a clarion call for a huge district-wide AIKS rally at the divisional commissioner's office at Nashik on June 20 on the above burning issues of the peasantry.

Just before the public meeting, Brinda Karat inaugurated the new CPI(M) area committee office at Umbarthan, which was built with generous contributions from the local people.