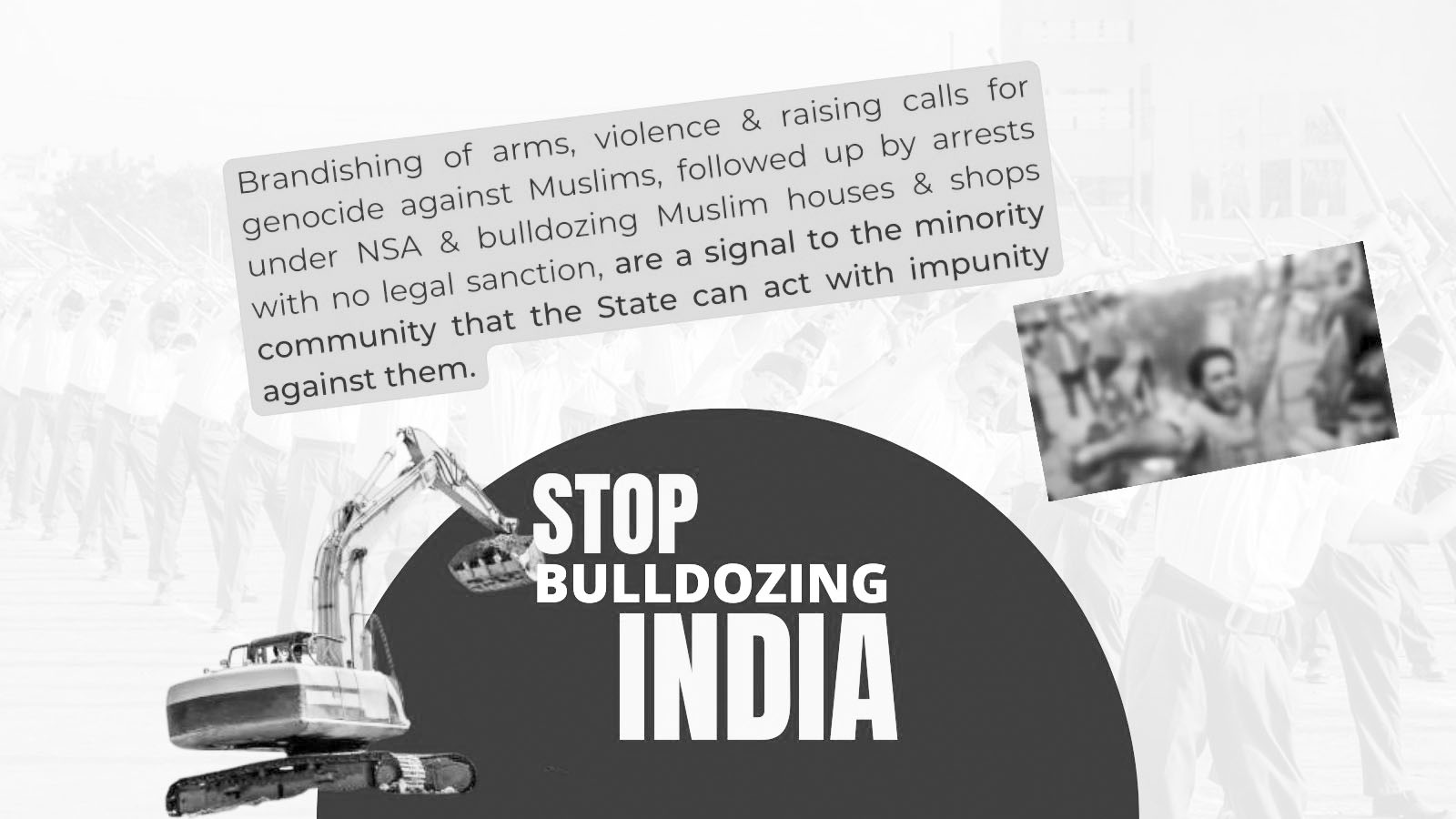 India: Where the Fringe is Above the Law

IN history there are few precedents for the bulldozer demolitions of houses of Muslims taking place in BJP-ruled states across India accusing them of being “ rioters” without due process of law. In Nazi Germany on November 9-10, 1938, the fascist gangs of Hitler’s party went on a rampage using sledge hammers to damage the properties of the Jews while a 'benevolent' police force looked on. Those terrible days came to be known as Kristallnacht— the night of broken glass— that littered the streets from the broken windows and doors of Jewish-owned stores, buildings, and synagogues. Here in India, it is not the stormtroopers, but the State, which is arrogating to itself the right to be accuser, the jury, the judge, and the hangman all rolled into one as though India is not governed by law or the constitution, but by a monarch with divine powers. It is highly condemnable.

While the protests in some places in UP, Ranchi, Howrah and elsewhere against the non-arrest of former BJP spokespersons for their communal, offensive remarks against Prophet Mohammed are legitimate and reflect the understandable anger in the community, the incidents of violence, even though isolated, play into the hands of the majoritarian communal forces who thrive on further polarisation and division. The violence resulted in unfortunate injuries to policemen, and to at least three deaths of protesters in police firing and injuries to many others. Sane voices within the community have asserted themselves and till now prevented mischief by fundamentalist extremist groups.

It is shameful that even after close to two weeks the former spokespersons have not been arrested. On the contrary, the Delhi police directly under the ministry of home affairs has filed two FIRs naming 32 persons who have nothing to do with the matter at hand including journalist Saba Naqvi. This condemnable partisanship by the police is a clear attempt to trivialize the enormity of the crime committed by the BJP spokespersons and to placate the growing chorus of Sangh's support for them. The duo must be acted against without further delay according to the law and the false FIR against Naqvi and others should be withdrawn.

The impunity with which BJP leaders continue to make the most obnoxious and provocative statements seeking to strip India’s Muslims of equal citizenship shows the patronage they enjoy from the State, the Government and the leadership of the ruling regime. The latest statement is that of BJP MP, Pragya Thakur, an accused in the Malegaon terror bombing case, who not only supported Nupur Sharma’s communal offensive rant against Prophet Mohammed but made the most outlandish accusation which she kept repeating against “ communists” and “non-believers” of insulting Hindu gods and goddesses. She is quoted as saying “ These non-believers have always done so. They have a communist history... This is India, and it belongs to Hindus, and Sanatan Dharma will stay here. It’s our responsibility to keep it alive, and we’ll do it.”

No Ms Thakur. India does not belong to believers of any one religion. India belongs to all its citizens— it belongs to “ we, the people of India” as our constitution so aptly put it. And no Ms Thakur, “ Sanatan dharma” is not under siege. It does not need you and your cohorts to keep it “ alive.” It lives in the pluralist beliefs, practices and cultures of crores of peace-loving Hindus who worship gods and goddesses of their choice and not according to the hierarchies your ideology creates and which you want to impose all over India. It is your implementation of the ideology of “ militarizing Hindudom” and “ Hinduising all politics”  propounded by Savarkar, that is the biggest insult to Hindu gods and goddesses.   It is when bullies inspired by leaders like you, make cowardly attacks on poor Muslims— such as street vendors, fakirs, and slum dwellers— beat and coerce them into saying “ Jai Shree ram”  like victors treat prisoners in a war, that deities are insulted and demeaned. Stop arrogating to yourself the defence of a religion which you insult every day by using it as a political instrument to achieve your anti-constitutional goal of a theocratic India. Your hateful slogans that Indian Muslims should go to Pakistan are because you want to create the mirror image of a society governed by religious texts— you want to undo the aspirations of those who sacrificed their all for the freedom of India embodied, in some measure, by our constitution. What you and your ideological predecessors failed to do during India’s battle for freedom, is to turn India into a nation based on Manu Smriti you want to implement now.  And please,  instead of demonising one religion, study history to understand how practices like sati, child marriage, cruelty and social exclusion of widows to mention a few, were practised and defended by many leaders in the name of religion, across religions.

Communists are believers in respecting the constitutional guarantees for the freedom of choice of religious belief, something which is quite alien to the likes of Ms Thakur. Within the four corners of the law and constitutional rights of freedom of speech, communists certainly promote a scientific temper and criticize social institutions like caste which use the religious sanction of Hindu texts for the most regressive and anti-human practices abhorrent to the goal of social and economic equality.  It is because communists believe in the separation of religion from politics, that communists have a proud record of opposing all manner of extremist politics regardless of the religious garb they adopt. This is one of the reasons why fundamentalist organisations like the PFI and the SDPI in Kerala spew venom against the communists because they know that there will never be a compromise with their brand of politics which only helps and aids the majoritarian communalism practised by the Sangh Parivar, apart from the damage it does to secular principles and values.

In the seventy-fifth year of India’s independence, instead of being able to showcase the strengths of a secular country and the organic unity of a diverse people, India is paying a high price for the ideology and cultures of  Islamophobia and bigotry promoted in all spheres of life, including in the manufacturing or of the erasure of history by those in power today. Nupur Sharma was described officially as a fringe element. Tomorrow Pragya Thakur may be too. But it hardly lends credibility to India’s global image when it is seen that for weeks the powerful Central Government has elevated these “fringe elements” beyond the reach of the law.