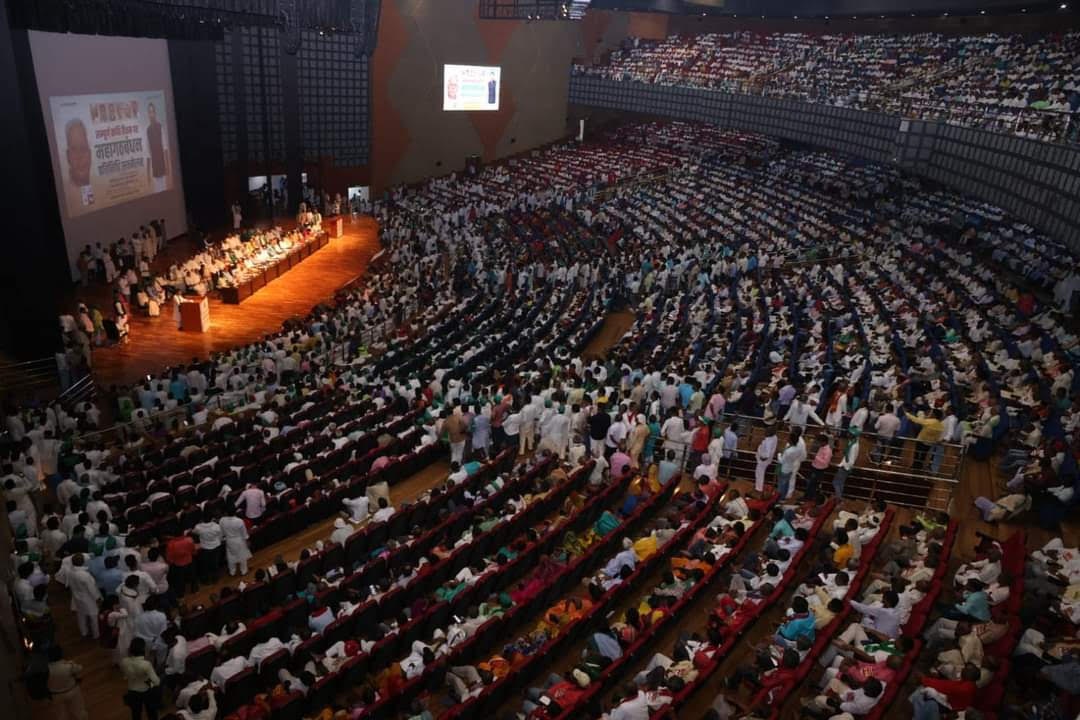 IN the background of growing resentment among common people, lawlessness and attacks against dalits, women and the minorities, a convention of workers of the CPI(M), CPI, CPI(ML) and RJD, on June 5 heralded a new chapter in the ongoing battle against the anti-people, pro-corporate and naked communal politics of the BJP regime at the centre and the NDA dispensation in Bihar. Leaders and workers of the CPI(M), CPI, CPI(ML) and RJD, with their respective party headbands, scarfs, flags and colourful badges, filled up the newly built Bapu Sabhagar in Patna. The hall with a capacity to accommodate 6,000 people was full and more than a thousand workers were outside braving the scorching sun.

At the insistence of the Left parties in an earlier meeting called by the RJD, it was decided to bring out a report card exposing the so-called development under the NDA regime led by chief minister Nitish Kumar and chalk out an action programme to reveal the real anti-people face of the government and pave the way for a pro-people development trajectory. June 5 was chosen to commemorate the historic Total Revolution call given by Jayaprakash Narayan, the hero of the anti-emergency movement, in a mammoth meeting organised in Gandhi Maidan in 1974.

Today the country faces a more challenging situation as the levers of power are in the hands of the RSS-controlled BJP which is hell bent on destroying the idea of India shaped during the anti-imperialist movement, and is trying to create a fascistic “Hindu rashtra”. The present regime is transferring the entire national assets into the hands of a chosen few crony capitalists and depriving the 80 per cent of the people of the country of their basic needs. The democratic rights are being trampled daily and anyone who criticises the government is branded as anti-national. The suffocating national environment and the pauperisation of the common people, workers, peasants, students and the youth provide no alternative but to fight back.

Bihar is proud of its contributions in the fight against the emergency rule and will remain in the forefront to fight the most savage rule of the BJP and its allies. The June 5 convention is necessarily a platform for launching a statewide struggle, mobilising lakhs of workers, peasants, youth, students, teachers, women workers and all marginalised sections of the state, to chart out a different pro-people development trajectory. The convention started at 12 noon and lasted for three-and-a-half hours. It was presided over by leader of the opposition in the Bihar assembly Tejaswi Yadav of the RJD and was addressed by CPI(M) Polit Bureau member Ashok Dhawale, CPI general secretary D Raja, CPI(ML) general secretary Dipankar Bhattacharya, CPI central secretariat member Atul Anjan, CPI(M) Central Committee member and state secretary Lalan Choudhary, Central Committee member Awadhesh Kumar, CPI(M) MLA Ajay Kumar, RJD state president Jagdanand Singh, RJD leaders Abdul Bari Siddiqui and Shivanand Tiwari, among others. The convention released a damning chargesheet against the BJP-JDU government. It is exhaustive and exposes the all-round failure of the present dispensation, which has been ruling the state for the last 16 years.

Addressing the convention, CPI(M) leader Dhawale recalled the glorious role played by the people of Bihar under the charismatic leadership of Jayaprakash Narayan against the authoritarian emergency regime in the 1970s and exhorted the gathering to take a pledge to oust the central and the state governments led by the BJP and its allies and save the secular and democratic character of the constitution. He lambasted the central government for its total surrender before the finance capital and for putting India on sale. Paying tributes to those who died during the recent kisan movement, he called upon the assembled workers to fan out to every nook and corner of the state and mobilise the people to fight against rising prices of essential commodities, shrinking employment opportunities and growing economic disparity, hunger etc. He came down heavily against the politics of communal polarisation perfected by the BJP and criticised Nitish Kumar for providing space for the RSS-BJP to grow in the state.

CPI(M) state secretary Lalan Chowdhary exposed the hypocrisy of the Nitish Kumar regime on every single issue. On the one hand Nitish Kumar announces providing homestead land to the homeless people and on the other he is deploying bulldozers to demolish the hamlets of dalits and poor people. Citing a Niti Aayog report, he exposed the hollowness of his development claims. Public health and education are in shambles, depriving poor children from education and common people from having access to free health services. He called upon the gathering to unleash a united movement till the communal and pro-corporate forces are defeated.

Awadhesh Kumar raised the basic issue of land distribution as recommended by the Bandyopadhyay Commission set up by the Nitish regime and vehemently criticised the eviction drive launched by the government against the poor and homeless people who have been living on government and ceiling surplus lands for 40-50 years.

Lalu Prasad was not present in the hall due to ill health but his message was screened in the hall. Tejaswi Yadav thanked the workers for their massive show of strength and giving a strong message of unity against the ruling dispensation of Bihar. Referring to the chargesheet placed before the convention, he severely criticised the Nitish Kumar-led “double engine” government for its all-round failure and complete surrender to communal forces. He mocked at the often-repeated slogan of the BJP that Hindus are in danger when all the important posts are in the hands of Hindus. He also raised the issue of special status for Bihar which was time and again raised by Nitish Kumar but still remains a pipedream.

At the end of the convention, a call was given for massive demonstrations at the district headquarters on August 7 against price rice, unemployment, corruption, the move to cancel 29 lakh ration cards and bulldozer politics of the Nitish regime and over other burning issues of peasants, workers and the people.