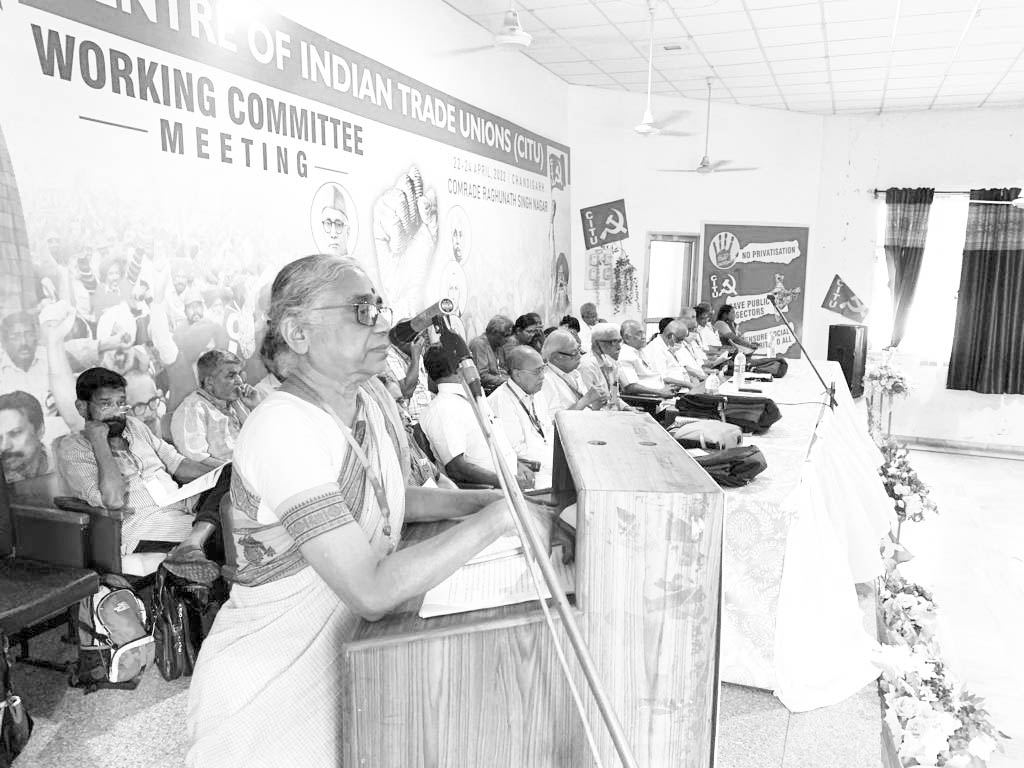 THE working committee of the Centre of Indian Trade Unions (CITU) which met at Chandigarh from April 22-24, called upon the working class to uphold class unity and intensify the struggles against neoliberalism and defeat the machinations of the communal forces to polarise our society.

Working Committee noted that workers in almost all the countries are fighting to improve their conditions, regain and  defend their hard earned rights, which are under attack by imperialism and international finance dictated neoliberal policies followed by the pro-corporate governments in their countries. The workers of France, Greece, and of various unions in Turkey, Germany, Slovenia, Lebanon, UK, Zimbabwe, Haiti were all on strikes. The strikes and protests by the various sections of workers and their surge in USA which were termed as Strike October by the media in the last year have furthered intensified in 2022. A common feature of these struggles is that the major demands of workers everywhere are for increase in wages to compensate the high inflation, protect their collective bargaining rights, social security benefits, job protection and safe work place. All these struggles were undertaken in spite of threats of victimisation, termination, harassment and repression by the State machinery.

The working committee also noted that unionisation is receiving increasing support from people, particularly the young. For the first time in the decade, union membership in USA has gone up to 10.8 per cent.  Popular struggles against neoliberal policies and against the interventions of US imperialism have resulted in the election of governments in several countries that have been trying to implement pro-people policies. Such governments are today in place in Venezuela, Nicaragua, Mexico, Argentina, Bolivia, Honduras, Peru and Chile. Chile, which was among the first countries where neoliberalism was initiated and suffered under military dictatorship for around five decades, is an example where sustained struggles, conducted consciously against neoliberalism involving all sections of people have led to the establishment of a pro-people Left government.

The meeting assessed that while the world could not come out of the global crisis of 2008-2009, the Covid pandemic has pushed the world into deeper crisis as the World Bank maintains that the world output in 2022 would be 2 per cent that is below than the pre pandemic projections. Austerity policies adopted to address the crisis of 2008 have resulted in decline in real wages in developed countries like UK, Italy, and Japan etc even while labour productivity increased rapidly. Because of job losses between 2019 and 2020 labour income has declined by 10.7 per cent, which has further worsened in 2021. The very character of capitalism and its predatory nature contains such intensified exploitation. The ILO projects the global crisis induced job gap to reach 75 million in 2020. Global working hours declined by 8.8 per cent in 2020 equivalent to loss of 255 million full time jobs.

Neoliberalism, which global capital has imposed as a solution to capitalist crisis, has proved to be a failure. In fact, capitalism has no solution to the problems faced by the people in the profit driven system. But in its desperate attempt to prevent the Left gaining from peoples struggles it seeks to disrupt unity of workers and toiling people by dividing them over religion, race, caste, region etc and is trying to weaken the growing struggles against neoliberalism, by promoting the right wing forces with divisive and disruptive agendas. USA with its weakened economic strength is viewing the growth of socialist China as a threat to it.

The working committee has noted that the fight of working class against neoliberalism at local and national levels must also be fought at global level, also directed against the imperialism. The meeting decided to implement the important decisions to be taken by the 18th Congress of the World Federation of Trade Unions (WFTU), of which CITU is an affiliate, being held at Rome from May 6-8, 2022, to protect the interests of workers to meet their contemporary needs and to create an alternative to the capitalist system.

The meeting, analysing the national situation and the way in which the neoliberal policies are being implemented vigorously by the Modi led BJP government reviewed the two days historical general strike held on March 28-29 and termed it as the biggest ever strike the country has witnessed amidst all challenges and adverse situations created by the ruling governments across the country except that of the LDF Govt in Kerala. The meeting congratulated the workers for making the strike a success and thanked the Samyukta Kisan Morcha and in particular AIKS-AIAWU for their solidarity and participation in several places and all student, women, and youth organisations for their participation and making the strike a success. The meeting self-critically identified the weaknesses which were observed in the participation of workers in some public sector undertakings in some states in the strike, particularly on the second day and decided to work out a long term strategy to strengthen CITU’s presence in the public sector to overcome the weakness and to make serious efforts to organise the contract workers in the public sector undertakings.

The working committee decided to undertake the review of strike at various levels keeping in mind the explanation of Lenin regarding strikes being ‘schools of war in which workers learn to make war on their enemies for the liberation of the whole people, of all who labour, from the yoke of government officials and from the yoke of capital’. As a class oriented trade union our job is to help workers realise who their real enemies are.

The working committee identified that the communal outfits of Hindutva forces led by fascistic RSS are unleashing newer deliberate attacks in the name of Hijab, Halal, Azaan and boycott of Muslim traders and autos, taxis drivers in order to divide the emerging unity of working class as seen in the recent general strike and the historical victory of the united kisan struggle so that it can serve the interests of political economy of neoliberalism. These increased attacks across the country and the RSS led BJP government’s initiatives to amend statutes, rules, issue circulars, directions and orders to make the executive subservient to their machinations will fan the minority fundamentalism and further caste based identity politics which will pose potential threat to the working class unity and the constitutional values of the country.

The meeting resolved to further widen and intensify the struggles to heighten the resistance and defiance to the policies of communal corporate nexus to save the nation and to save the people in the background of loot and plunder initiated through divestment and National Monetisation Pipeline and its tool, National Land Monetisation Corporation.

The meeting adopted the accounts and the credential committee report placed by the treasurer, M L Malkotia. The meeting, in its inaugural session unanimously adopted the resolution calling on the workers to “Uphold Unity and to defeat Communal Polarisation”, which was placed by K N Umesh and seconded by Pramod Pradhan. Another resolution “Opposing the LIC IPO and appreciating the initiative of CITU Kerala state committee in unleashing a people’s movement against it”, placed by Sai Babu and seconded by K N Gopinath was also unanimously adopted by the working committee of CITU.

The meeting has decided to hold its 17th All India Conference of CITU at Bangalore from January 18-22, 2023 based on the membership of 2021 with 1500 delegates. The meeting has chalked out several movemental and organisational tasks to be undertaken. The meeting also decided to organise a big mobilisation of workers, kisans and agricultural workers jointly during the 2023 budget session. Tapan Sen summed up the discussion and Hemalata delivered the concluding address. The meeting co-opted K N Umesh as secretary. CITU national secretary, Usha delivered the welcome address and Chandrashekar rendered vote of thanks.