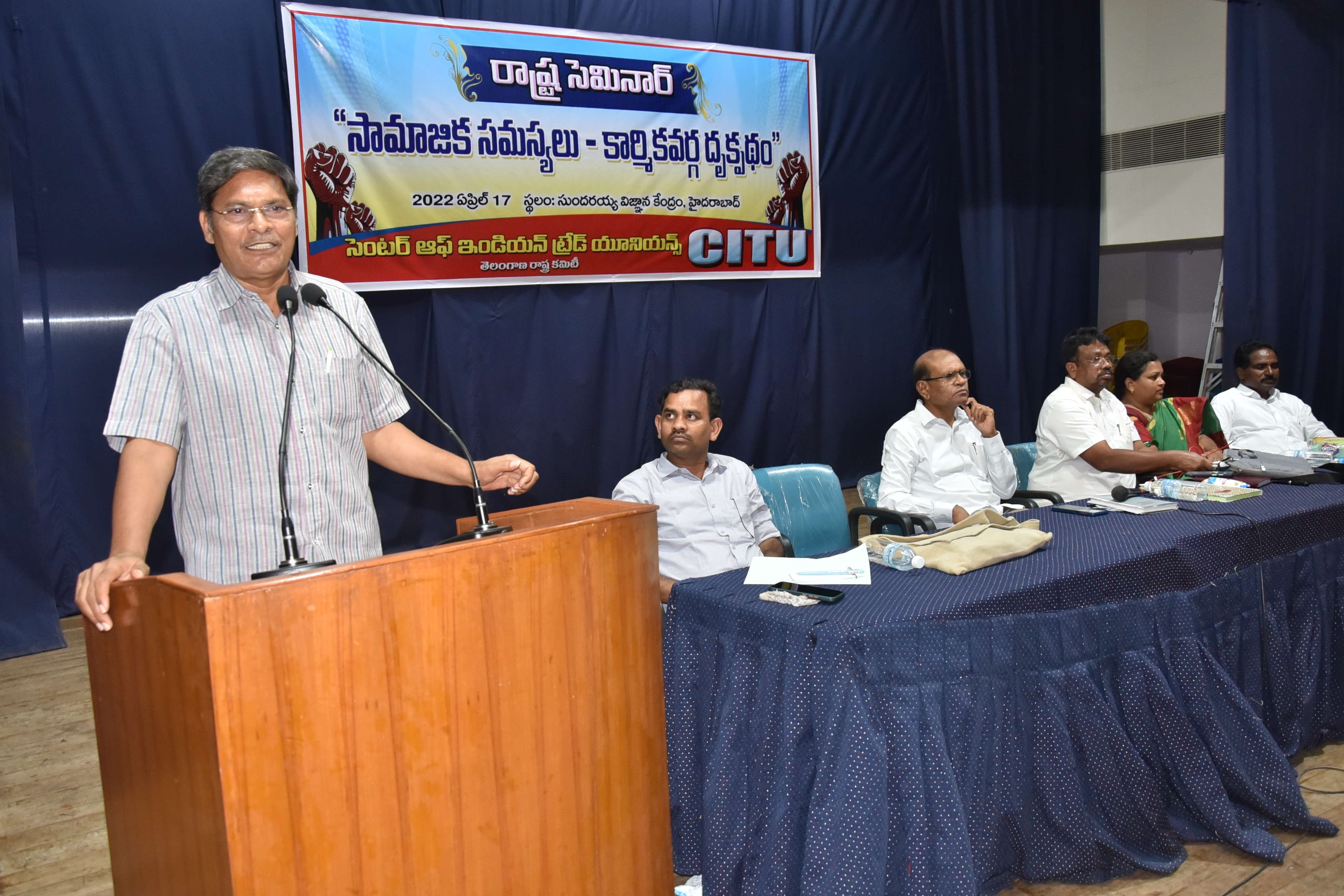 GENERALLY, the period of first two weeks of April is the period in which social issues and caste discrimination become an agenda of discussion in the country. But some people naively raise a question whether caste discrimination and gender discrimination still exist. They feel that there cannot be any discrimination when everybody is coming to school, college and doing any job, irrespective of caste or gender. There is no second opinion that all such discriminations and sexual attacks on women are social evils. But there are different opinions about their continuation in the present situation. The question is, whether they are just remnants of the old, backward society or whether they are intentionally nurtured hegemonistic attitudes against some social groups that continue even today. No one denies that they all originated in the feudal society. But if that is all, why are they still strong in the present society i.e,. fast growing towards a capitalist society. This is an important question.

Instances of discrimination based on caste and gender and sexual attacks on women are rising fast, along with the development of the society. In this backdrop, the Telangana state committee of the CITU gave a call to study various forms of discrimination and their intensity among the working class and at the work place and also to extend solidarity to the struggles against such social evils. The call attracted attention of many other sections in the society.

April 6 was the death anniversary of B T Ranadive, who has written on ‘Caste-Class and Property Relations’. It was the CITU which established a working women’s coordination committee under the presidentship of B T Ranadive. It was the first of its kind in the trade union movement in India to deal with the problems of working women. He was building working class movement in then Bombay when B R Ambedkar was working exclusively on caste question. They also worked together on some occasions. Jyotirao Phule worked against caste discrimination and for equal rights for women long before B T Ranadive and B R Ambedkar. Phule and his wife Savitribai Phule worked together against the tides of social discrimination. They faced insult and physical attacks also. They organised hostel for single mothers who mostly came from Brahmin families at that time. It was nothing but a revolt against social evils in that period. B R Ambedkar identified caste as the main hurdle for the development of society and felt that work against caste system should be the main task and worked for it till his last breath. He was a member of Jawaharlal Nehru’s cabinet and proposed a bill to protect women’s rights. When Nehru discouraged him in his efforts, Ambedkar simply resigned from the ministry. These are the three great personalities whose death anniversary or birth anniversary falls in the first two weeks of April.

The CITU Telangana state committee has taken this as an opportunity to motivate the working class against caste and gender-based discriminations and also against sexual harassment of women. Trade Union cadre made an attempt to study the forms of discrimination and harassment. It also appealed to workers to contribute money in solidarity with the struggle against these evils. The CITU organised a state-level seminar on April 17 on “social issues and working class perspective”. The amount received till then was handed over to the leaders of the organisation present on the dais, for struggle against caste discrimination (KVPS).

These social evils are evident in the modern industry and in the cosmopolitan city like Hyderabad also. The CITU has decided to organise events on the death and birth anniversaries of these great personalities to motivate and mobilise the working class as a class against these social evils. The state committee has also felt that this activity should not become a mere formality, confining to this particular period, rather it should become a practice to stand with the struggling forces against all types of discrimination, hegemonistic attitudes and against sexual harassment.

Workers from downtrodden sections in our unions used to attend the programmes, organised by caste associations. But this time, they participated in the programmes organised by CITU and listened to the speeches delivered from a working class perspective. Some workers posed questions also during the campaign. Some of them asked, “why should we organise birth anniversaries of Ambedkar and Jyotirao Phule?” Some of them asked, “why should we fight for dalits and Scheduled Tribes? Already they are enjoying reservations. Our children are not getting jobs though they are good students.” But the impact of this campaign is such that they were convinced and made contributions to the struggle fund. They have understood the importance of these occasions to build working class unity and fight for “education for all and jobs for all” and to fight against capitalist society and liberalisation policies. This is a good experience for leaders and cadre.

May Day is also the birthday of P Sundarayya. May 19 is his death anniversary. He dedicated his whole life to the fight against exploitation and all sorts of discrimination. He started his protest against discrimination from his own family. The second phase of this campaign will be continued from May 1 to 19.

Nowadays, death or birth anniversaries of great personalities have become a routine activity or a formality in the society. Birth anniversaries of Ambedkar and Jyotirao Phule have been organised by many sections. Many leaders are competing with each other to garland statues of Ambedkar on April 14. They don’t want to lag behind anybody. Some leaders who practise caste discrimination and don’t respect women also preach many principles in their speeches on such occasions. One can question why such discrimination and hegemonistic attitudes are practised in the society when everybody accepts that Ambedkar and Phule are great personalities and caste system is an important hurdle for the development of country. The working class should come forward to answer this question and show the way out. The bourgeois parties are utilising this activity for garnering votes. That is why, whatever they preach, all such evils are increasing when they are in power.

Attacks on dalits, Scheduled Tribes, sexual attacks on women are the highest in India under the Modi government. It is not different in Telangana state also. The situation was same when the Congress was in power in united Andhra Pradesh. Caste associations are trying to emphasize their identity politics. They say that their caste is no more inferior to any other so-called upper caste and they call the people to unite on their caste basis and to be proud of their caste. This attitude is against what Ambedkar himself believed. He called to strive for a casteless society. Communists view this question entirely in a different way. Communist forces have been fighting for a new society where there is no exploitation of the working class and no discrimination and hegemonistic attitude. They call for the working class to fight unitedly to achieve this task.