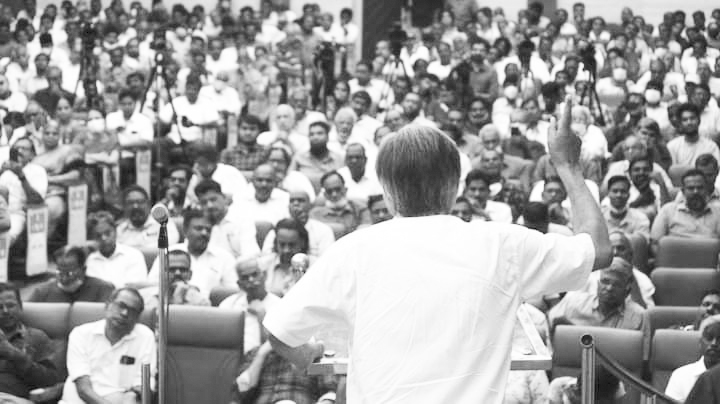 Support Us to be Together

A SEMINAR was organised on " Kashmir Files and Communalism" in Chennai on April 12, at Sir P T Thyagaraja Hall, T Nagar, Chennai, on behalf of the Tamil Nadu Platform for People's Unity.

While speaking in the seminar, Mohammad Yousuf Tarigami, Central Committee Member of the CPI(M), asked the BJP government, what did they achieve after dividing and downgrading Jammu and Kashmir? After India's independence, considering the future of Jammu and Kashmir, the Constituent Assembly of India had given certain rights to the Jammu and Kashmir people through the Constitution of India. The makers of our constitution with a long vision have given the rights and inserted certain provisions in the constitution.

The producers of the film, ‘Kashmir Files’ stated that the film was based on the exodus of Kashmiri pandits from Kashmir in 1990. But the film is hiding some historical facts. It shows certain exaggerated incidents. The extremists who are killing innocents have no religion or country. Like Kashmiri pandits, poor ordinary Muslims were also threatened by these extremists, this is completely missing in the film.

In fact, the extremists first killed a Muslim political activist before the exodus began. That was the beginning. Because of the fear created by the extremists, pandits started migrating from Kashmir. Hence to say that only the Kashmiri pandits have suffered is wrong. The incidents shown in this film are imaginary. The union government is trying to create a situation to polarise people in Kashmir and outside based on religion and to gain politically in the country. We should not allow that. They want to isolate one section of the people from the national mainstream and want to depict them as anti-nationals and extremists. This will help them to propagate the Hindutva ideology, which will get them votes. They did not do anything good to the Kashmiri pandits after they came to power in 2014. They are creating hatred against Muslims.  What they have done for the Kashmiri pandits to return to Kashmir after 2014? Nothing!

We should share the pain and anguish of the Kashmiri pandits and not use them for electoral purposes by marketing their pain.                              They are using the central government agencies to intimidate the opposition leaders in Kashmir.  They sent a summon to the ex-chief minister, Omar Abdulla through the enforcement directorate. The ED, NIA, and CBI are being used against many opposition leaders to intimidate and silence them.  While abolishing Article 370 of the Constitution, they promised to hold elections in Jammu and Kashmir very soon. But they did not conduct the election so far. The central government is saying that extremism has come down in Jammu and Kashmir. Then why did not they revoke AFSPA?

I am expressing my anguish, not as a political leader of a Party, but I am standing before you as an ordinary Kashmiri citizen sharing the sentiments of the Kashmiri people, said Tarigami. We expect moral support from the people from other parts of our country that will give strength to our people to fight against the government to safeguard the rights of the people of Jammu and Kashmir.

Communal harmony and secularism are not merely words. But they are the strength of India. Mohammad Yousuf Tarigami appealed to the people to protect the unity of the people and their sentiments as India was created out of the struggles and martyrdom of Bhagat Singh, Rajguru and Sukhdev along with thousands of others.

Vasuki, vice-president of AIDWA presided over the seminar. She said that now the films are depicting the trade union leaders, who are protecting the interest of workers against the onslaught of capitalism, as renegades, ridiculing the transgenders and differently-abled people,  promoting the casteist leaders and portraying the Muslims as smugglers and anti-nationals.

The Kashmir Files has come to counter the film Jai Bhim which is based on real facts. This film(Kashmir Files) hides certain facts, twists the incidents and justifies hate politics.

The real intention of the hate mongers can be easily understood. Instead of going to a temple, they go to a mosque during Ram Navami and then commit arson. The Hindutva ideology is perniciously being made part and parcel of the sentiments of the people, which is extremely dangerous. We should fight against this,  in the election field as well as in the ideological field.

Jen Ram, a senior journalist in Tamil Nadu appealed to all the secular forces in the state to unite against the Sangh Parivar forces and defeat them.

M Ramakrishnan, general secretary of the minorities welfare committee welcomed the gathering. The convention was held in presence of the state coordinator of the platform, G Udayakumar, S Kumar; coordinator Chennai, Makkal Medai gave the vote of thanks.