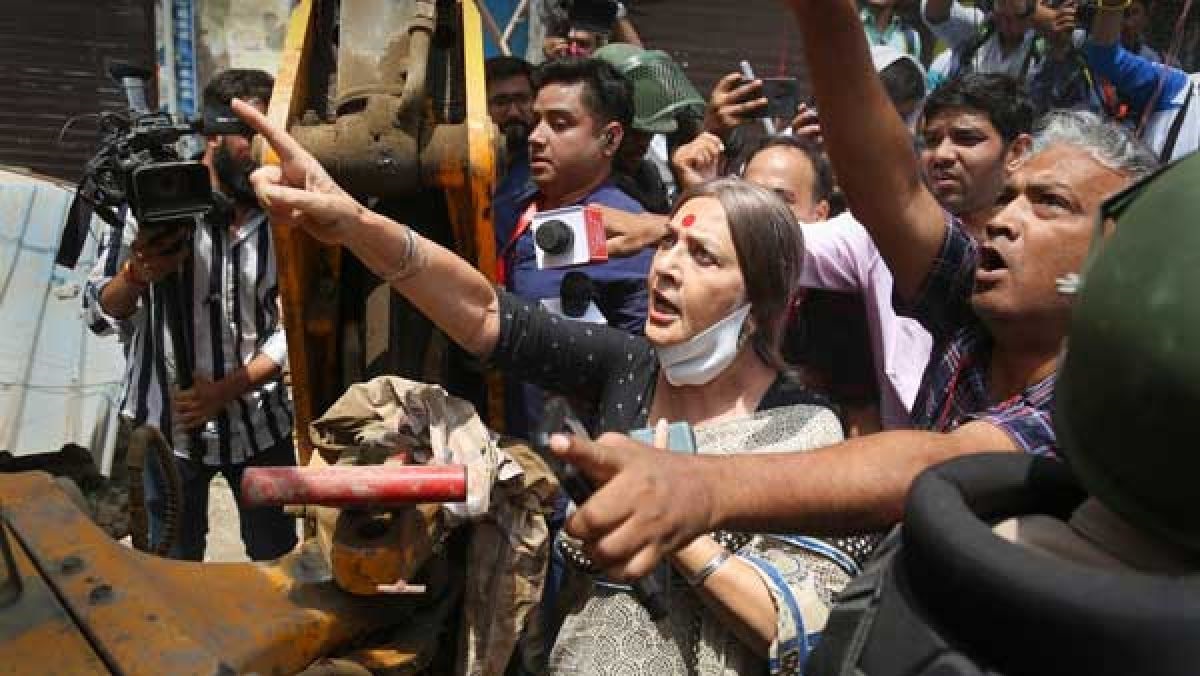 Fact Finding Report of the Left Parties on Jahangirpuri

A FACT finding team from the Left parties (CPI(M), CPI, CPI(ML), Forward Block) visited the communal violence affected areas of Jahangirpuri-C block on April 17, 2022. The following is a report after talking to the affected people and residents of the area belonging to both communities. The delegation interacted with at least 50 households. The delegation also met Kishen Kumar, the Additional DCP of the area, in the Jahangirpuri police station and other police personnel in the thana.

What happened on April 16?

The team that went to investigate the facts was apprised by everyone that on Hanuman Jayanti, a group of 150 to 200 people armed with weapons in their hands and loud DJ music were roaming in processions since afternoon raising slogans in the streets of Jahangirpuri. By standers said they saw pistols and swords being waved by the processionists which are confirmed by videos shown on various TV channels. Loud and aggressive slogans were being given. The team was informed that this was not a procession organised by local people but was organised by the youth wing of the Bajrang Dal with most from outside the area.

The team was informed that the procession was accompanied by two police jeeps – one at the front of the procession and the other at the end. However each jeep had only two personnel.

The team was informed that the procession had already made two rounds of that area in Block C Jehangirpuri in which the dominant residents are Bengali speaking Muslims. It was in the third round of procession that the incidents occurred. If there was a “conspiracy” by the local Muslim residents to attack the procession as alleged by BJP leaders, the attacks would have taken place earlier. The fact is that the incidents occurred when the procession stopped outside a mosque at the exact time when those who were keeping roza were gathering at the mosque for the prayer.

The second question is: Why was the procession allowed to stop there? Why were slogans allowed just outside the mosque? In other words an armed procession is given license to stop outside the mosque shouting slogans at the exact time when roza is to end and when a crowd of Muslims had gathered. If these incidents are to be described as a conspiracy – it is this which is the conspiracy in which the police itself has a responsibility.

The team was told that there was stone-pelting which started from both sides. The team was told that there was a fear among the residents near that area that the processionists would enter the mosque and that the police were not taking any action. Big crowds collected. Some people who did not want to be named also said that arms were later brought by some elements in the minority community. The processionists were outnumbered and ran away.

The delegation saw some cars and a motor bike which had been burnt. A shop belonging to a Hindu was looted. It also was informed that the police which came to the spot were caught in the cross stone pelting and some suffered injuries.

At night on April 16, the police conducted raids in the area making indiscriminate arrests. When women tried to find out from the police why their homes were being raided, male police punched them in the stomach and beat them.

The team went to the police station. There they were surprised to find that the BJP president Adesh Gupta, Hansraj Hans, MP were addressing a press conference inside the police station premises in the presence of police officials. Around them were people shouting Jai Shri Ram slogans.

The third question is: Does this not clearly show the partiality of the police? The team found that in the entire area, there was no confidence in the police and that it was a completely one-sided prejudiced inquiry influenced by BJP leaders. It is also to be noted that the BJP has openly praised the role of the police. In this connection the one sided arrests by the police of mainly members of the minority community even though video evidence is available of the provocative behaviour and aggressive actions of the processionists is totally unjust and motivated.

The delegation spoke to the Additional DCP and informed him about the feelings among the residents of the total partiality of the police triggered by the indiscriminate picking up of youth of the Muslim community while there was no action against the processionists. The delegation also informed the police about the complaints from women of being manhandled by male police personnel.

The team found that among people living in the locality there has not been a single incident of communal clashes. Hindus and Muslims have been living together for decades. The Bengali Muslims have been living in Jahangirpuri since the inception of this resettlement colony, at least for four decades.  They are mainly self-employed households involved in street vending, petty trade, selling of fish, waste collection etc. It is shocking that the BJP should term them as “illegal” or describe them as Rohingya refugees. They are bonafide citizens of Delhi.

Conclusion: The team found that the incidents in Jahangirpuri have occurred as a part of the agenda of some of the sangh parivar affiliates to use religious occasions and festivals as occasions to create communal incidents. In the case in Delhi it should be seen in conjunction with the earlier incidents.  The South Delhi Municipal Corporation mayor from the BJP announced a ban on the sale of non-vegetarian food, ABVP tried to enforce vegetarian food in JNU and attacked those protested, Rajaram a caretaker of a farmhouse in Chhawla village was killed by cow vigilantes alleging slaughter and to all this is the Jahangirpuri communal violence as the latest chapter.

It is reported that the inquiry has been handed over to the crime branch of the Delhi police. This is an eye wash and unacceptable. A judicial inquiry with a time bound mandate should be ordered to unravel the truth which will no doubt bring to light the diabolical efforts being made by the sangh parivar to disturb communal harmony in the capital.

The Left parties appeal to the general public that the unity and mobilisation of the people is the only answer against these divisive forces. The need of the hour is to not let the plans of the RSS-BJP succeed in any way. They have opted to divert popular attention from the economic impasse faced by the country and the livelihood crisis of the people by spreading communal discord. Our alternative is united popular movements to defend people’s livelihoods and mass struggles against communalism.

Take Action on the Guilty Police

CPI(M) Polit Bureau member Brinda Karat, and Delhi state secretary of CPI(M) K M Tewari, have written a letter to the police commissioner, Delhi on April 18 regarding the Jehangirpuri violence and the role of the police in the wholly avoidable incidents of violence of a communal nature that occurred in Jehangirpuri on April 16. Below we publish the text of the letter.

VIDEO evidence aired on several TV channels along with eye witness reports to our fact finding team are conclusive evidence that the procession taken out by members of the youth wing of the Bajrang Dal was armed with several men carrying naked swords, lathis and also shockingly firearms. These weapons were openly flaunted and brandished during the procession. The police have stated that the procession had police permission. Did the police give permission to carry arms? In fact the processionists who carried arms had clearly violated the Arms Act which has stringent provisions of imprisonment for such violations. From your statement to the media, it is unclear whether you have identified the persons in the processions who were carrying arms and if so whether they have been arrested under the relevant provisions of law including the Arms Act. It is also unclear from your statement whether there is any investigation into the role of the police. Who is accountable for allowing an armed procession to stop in front of a mosque shouting provocative and aggressive slogans at the exact time when the prayers to break the Roza fast were scheduled to begin? Such deliberate acts of omission and commission by the police have directly resulted in the ensuing incidents.

It is most unfortunate that some police personnel suffered injuries during the course of duty. However it must be stated that if senior officers of the range had ensured due diligence before giving permission for the procession, if adequate police arrangements had been made, if action had been taken against weapon carrying processionists, if the procession had not been allowed to stop in front of the mosque – the incidents would not have taken place. It should be noted that there have never been incidents of a communal nature in this area earlier. Two communities have lived together in harmony.  This is further evidence that the events were manufactured by outsiders in the procession in the name of shobha yatra.

We also have information that male policemen raiding houses in C block at night manhandled and beat women. This is against all norms and rules laid down which forbid male police personnel to touch a woman. Further, on the 17th when our members along with others had met the Addl DCP Kishen Kumar in the Jehangirpuri PS, they were shocked to find that leaders of the BJP were holding a press conference within the compound of the thana. This is highly irregular and strengthens the apprehension of an entirely partisan and biased police role in the present case.

This letter is to appeal to you to take action against the police personnel (1) who allowed the procession to carry weapons (2) who were responsible for lack of adequate arrangements (3) who permitted the procession to stop in front of the mosque (4) who are conducting a one sided biased investigation. You have stated that people from both communities have been arrested. We stand for the arrest and punishment of all those guilty. However the overwhelming majority of arrests are from the minority community whereas the course of events shows that the main provocations and planning for the incidents was done by the organisation which held the procession, an affiliate of the Bajrang Dal as stated by the police.

The crime branch to whom the investigation has been handed over is under the overall jurisdiction of the very police force which in the case of the Jehangirpuri incident is responsible. It is for this reason that the CPI(M) has demanded a time bound judicial inquiry/an impartial investigation. In the meanwhile, we request you to take action against the police responsible.