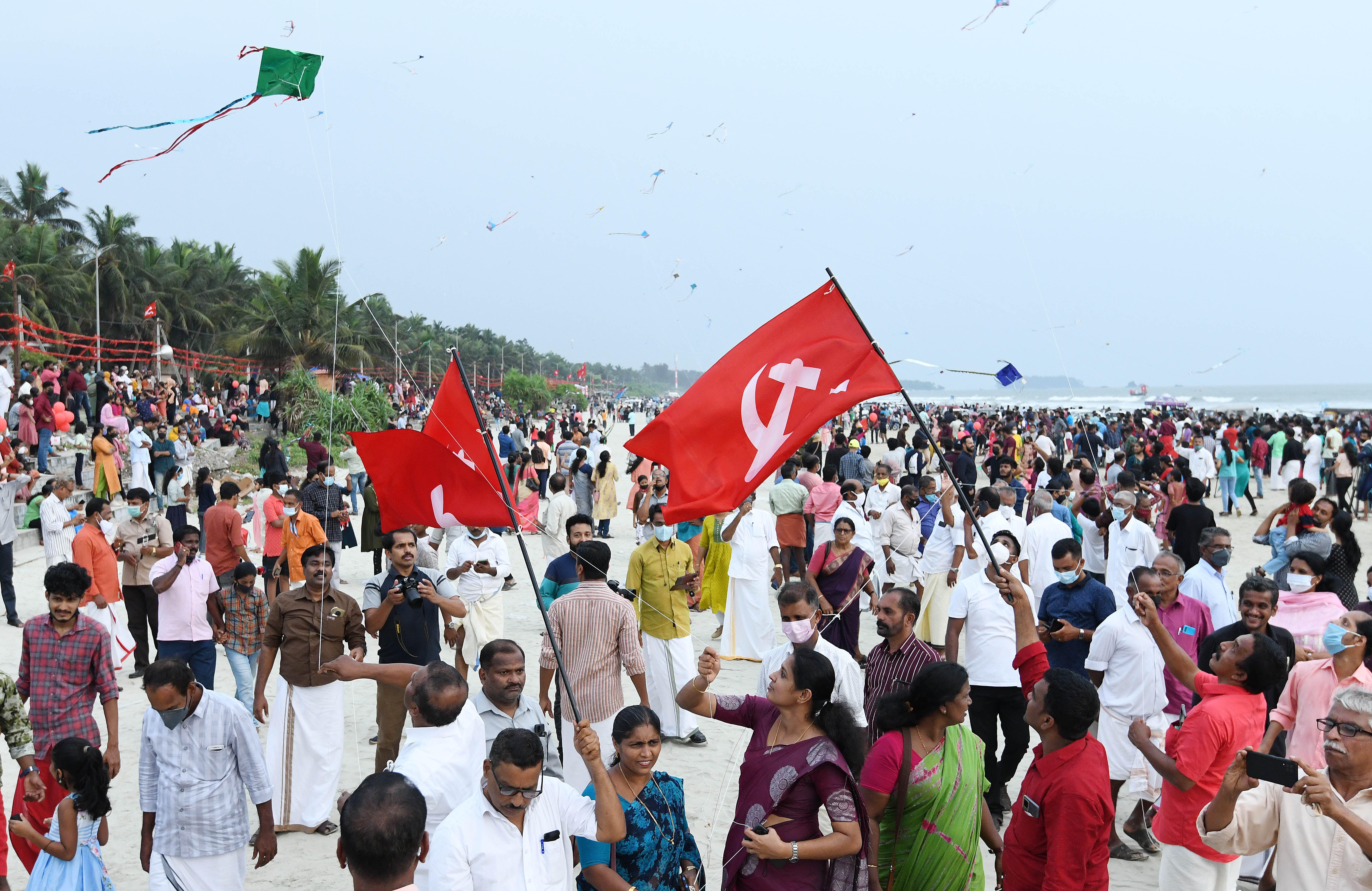 Kannur is Ready for the 23rd Party Congress

KANNUR, the land with a revolutionary legacy of agrarian revolts and struggles, is in the final stage of preparations to host the 23rd Party Congress of the CPI(M). Arrangements for the conference at the E K Nayanar Academy, Kannur, are almost complete and a public meeting and rally will be held at A K G Nagar at Kannur Jawahar Stadium. The delegate session will be held at the specially constructed E K Nayanar Nagar in E K Nayanar Academy.

An exhibition of historical paintings and sculptures titled- 'History A Weapon,’ will start on March 30, 2022, at K Varadarajan Nagar. A graphic narration of history is designed where the historical events are expressed with the help of illustrative images and sculptures. The exhibition visualises important international, national and local events in various fields. Renowned sculptors, painters and technicians have done this work. The exhibition depicts events that took place as part of the rise of the international communist movement.  Sculptures of Marx, Engels and Lenin are included. Another feature of the exhibition is the presentation of the history of the national movement leading up to contemporary national events. The exhibition will display the Jallianwala Bagh massacre and the heart-wrenching scenes of the killing of workers in Kilvenmani, Tamil Nadu. Scenes of the great Punnapra, Vayalar and Karivellur struggles, sculptures of social reformers and portraits of the martyrs are also on display.

The international book festival will be inaugurated on April 1, at Nirupam Sen Nagar. More than 80 publishers across the world will be participating in the book festival. We have planned an unprecedented expansion of libraries through the people’s mission for social development. Nearly 114 new libraries have been started in the district as part of this initiative. The book festival also provides an opportunity for interested individuals to contribute books for the new libraries and thus be part of this movement to promote them.

Seminars with important national and international themes will be held as part of the Party Congress with the participation of experts and the general public. A total of 27 seminars have been planned of which 20 have already been held. Dignitaries including the chief minister of Tamil Nadu, M K Stalin, will also be participating in one of the sessions.

On April 1, 2022, from 5 pm to 5.15 pm, people from different walks of life will line up holding a long and single flag of CPI (M) on the 23-kilometre stretch, from the Jawahar Ghat of Thalasserry, where the freedom fighters, Comrade Abu and Comrade Chathukutty were shot dead, to the statue of Comrade A K Gopalan. Simultaneously there will be another 33-kilometre line up of people at regular intervals, holding the red flag of CPI(M) from the statue of Comrade A K G to Karivellur, which forms the northern border of Kannur and from Thalasserry to Mahe – Poozhithala National Highway, which is the southern border of Kannur district. This day will be marked as Red Flag Day. People from all walks of life including freedom fighters, political leaders, filmmakers, artists, literary figures, scholars, environmentalists and social activists will line up for this historic event.

Volleyball and football tournaments were organised at the local levels. Thousands took part in volleyball in the tournaments in memory of Jimmy George, a renowned volleyball player from Kannur.

Social media was employed to convey to the people the history of the communist movement and its role in the freedom struggle and the social and cultural development of the country. A unique campaign using a short biopic of comrades associated with the movement, as an online video series has attracted great public attention. Titled ‘Kannur Manifesto’, the series depicted the lives of comrades who have been associated with the party from various walks of life. Their life histories intertwined with the history of the movement were depicted in the series.

Wall paintings were drawn at hundreds of places in the district with the help of artist groups. Local artists have created pieces of art by painting graffiti and paintings. The history of the independence struggle and the communist movement was beautifully illustrated in the paintings.

The conference will observe the green protocol and the use of single-use plastic will be avoided. Eco-friendly materials and resources will be used.

Reception committee offices by the various party units were set up and they were designed to convey political messages with attractive and artistic displays.

Every local committee has conducted a seminar on Kerala development. These seminars were held to promote open deliberations among the general public about alternative development strategies. Seminars have witnessed the active participation of people from all walks of life.

Every party branch has conducted family gatherings at its own locales. These meetings helped to take the message of the conference to the grassroots. The significance of the Party Congress and the current political scenario of the country were explained in such meetings.

A major part of the fund has been collected from door-to-door campaigns at the grassroots level from members and sympathisers of the Party. There was a warm response from the general public which has wholeheartedly supported the movement, within their limited means.

Eminent literary personalities like T Padmanabhan, K Satchidanandan, M Mukundan and others have actively participated in these activities.

The logo of the 23rd Party Congress has been released and the reception committee is functioning 24X7 for ensuring a successful conference.

Marking the culmination of the Party Congress, a march of 2000 red volunteers, will be held along with a public meeting.

The people from all walks of life are extending wholehearted support to the historic conference to be held at the land of Kannur which throbs with memories of valiant struggles.