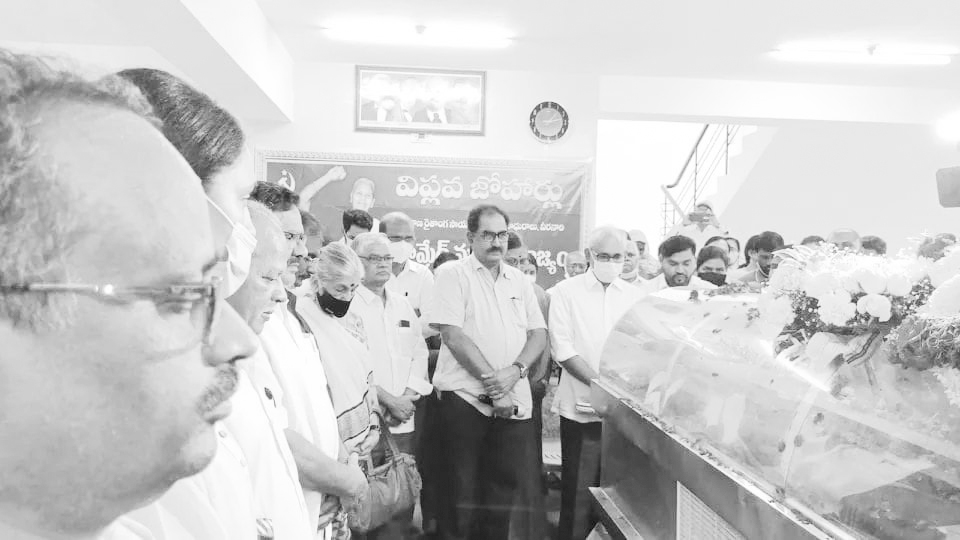 A RED star rose to the sky in the evening on March 19, leaving behind a legacy of revolution, comradeship and fearlessness. Communist stalwart and the legendary leader of the Telangana Peasants’ Armed Struggle, Comrade Mallu Swarajyam breathed her last at the age of 91 in Hyderabad, Andhra Pradesh. She drew courage from her mother and jumped into the battlefield of the Telangana Peasants’ Armed Struggle along with her brother, when she was only 11-years old. She drew inspiration from Maxim Gorky’s magnum opus ‘Mother’ and carried the red flag on her shoulders for eight decades with unflinching commitment.

Comrade Swarajyam, a name that is well known to Telugu people, was a leader of the masses and dedicated her life to the Indian Communist movement. She upheld the values of a true communist and withstood the challenging times of globalisation and peaking consumerism, and her life stands as an inspiration to future generations. She made a special mark for herself with her dedication to the Red Flag and the zealous spirit she brought to every people’s movement.

A powerful orator whose words hit the ruling class just as hard and on point as the bullets she fired during the armed peasant movement, Comrade Swarajyam could also move the people's hearts and rally them to fight for their rights. Be it the struggle for land, liquor ban or women’s emancipation, she inspired people to action and stood as a living example of the values she preached.

Even when bedridden, she preferred to stay in the AIDWA office and spent her last days with the women activists. Despite having a loving and caring family, she chose to be with the community and as her final contribution to society, she willed that her body be donated to medical college for the benefit of future doctors and medical research.

It is not an exaggeration to say that the role of Comrade Swarajyam’s mother, Chokkamma was critical in shaping her personality as a people's leader. Even though born into a family of landlords, inspired by the rising Indian independence movement in the 1930s, Chokkamma named her daughter ‘Swarajyam’, meaning independence. Chokkamma’s close relatives were influenced by the Andhra Maha Sabha, and she encouraged her children to join the freedom struggle along with her nephews. Chokkamma’s two other daughters and sons-in-law were also supporters of the movement. Even though she never directly took part in the freedom struggle, she encouraged her children to fight for the country and its people. She imbibed humanist values in her children and did not subscribe to the traditions of oppression and discrimination practised by landlords of that age. After her husband’s death, she extended her full support to her children in their revolutionary endeavours and to fight the very class she was born into.

Growing up with the humanist values imbibed from her mother, Comrade Swarajyam mingled with the poor and opposed regressive feudal traditions such as child marriages and caste discrimination from a young age. She openly carried water to the fields along with the agriculture labourers and participated in anti-caste community lunches. She broke the shackles of tradition and created history by encouraging dalits (they used to be called Harijans then) to play ‘Batukamma’, a traditional floral dance of Telangana.

Comrade Swarajyam took up arms for the first time to liberate the workers of Telangana from bonded labour. The movement intensified with the resistance of a washerwoman Ayilamma who, in 1946, defied her landlord to farm her land. Ayilamma’s resistance inspired many, and it grew into a struggle of tenant farmers against the zamindari system. With the heroic death of the armed struggle leader Doddi Komarayya in the Kadivendi demonstration of July 4 in the same year, the anti-zamindar sentiment grew stronger. It was at this period that the Communist Party, on July 11, gave a call for an armed peasants’ struggle.

Upon the call given by the Communist Party, Comrade Swarajyam joined the struggle and moved among the people with various aliases to escape the police and organised the movement. She moved among the tribals as Sammakka and gained fame as Rajakka, and led a squad of women revolutionaries called the ‘Rajakka Dalam’.

Dropped out of school at 10, Comrade Swarajyam attended the meetings of the Communist Party along with her elder brother. She wrote and sang about the people's problems in the guise of Batukamma songs and popularised them among the masses. She attended political classes in Vijayawada at the age of 11. She conducted struggle of workers in the agricultural fields of her relatives. She started her life of struggle, facing attack from her relatives and friends. The multi-faceted warrior sang the songs about Ayilamma’s struggle and the song of great Telugu poet Gurajada’s “Puttadi bomma Poornamma” to mobilise women for the movement.

Comrade Swarajyam worked in Old Suryapet of Telangana, where she met her future husband and fellow comrade Mallu Venkata Narsimha Reddy, fondly called Com VN by the Party comrades. She mobilised the tribals of the place into the struggle. That struggle, which distributed ten lakh acres of land to the poor, established village states (grama rajya). In the area she was working, Swarajyam took the administrative responsibilities for the village states. Here bonded labour was abolished and there was no caste and religious discrimination. In the village states, women had equal rights and women’s consent was mandatory in decisions of marriages and divorces. Swarajyam took up the task of mobilising people through her songs on the people's problems and collected resources for the movement.

She went underground for seven years and, along with her squad, trained people on ways to escape the police and mobilised women to attack landlords. They snatched the guns from the landlords and distributed them to the people. She was among the 300 women who participated in the military training given by Major Jaipal Singh. During this period of armed struggles, the rulers announced a reward of Rs 10,000 for the leader of the Rajakka Dalam.

She married Com VN after the armed struggle ended and stood with the Communist Party of India (Marxist) after the split of the Communist Party of India in 1964. However, the fight against the landlords was not yet finished. The landlords tried to grab the land given to the people under the Bhoodan movement with the support of the rulers. Comrade Swarajyam worked to protect the lands of the poor farmers and workers and opposed the anarchist and murderous politics of the landlords. She contested as a candidate of the Communist Party of India (Marxist), and she was elected as a member of the legislative assembly from the Tungathurthi constituency twice in 1978 and 1983. She also led the Andhra Pradesh Mahila Sangham as the state president from 1981 to 2002. As an MLA, she played a crucial role in gathering the support of the women in the assembly, to the rape victim Rameeza Bee. This crime incident of 1978 shook the Hyderabad city at the time as the perpetrators were none other than four police officers. At Comrade Swarajyam’s initiative, all the women members in the assembly, irrespective of their political affiliations, stood by the victim.

In 1983, she fought and won the elections against her younger brother, who joined the rival Telugu Desam Party (TDP). Her elder brother, who guided her in the movement in her youth, also entertained non-class tendencies in 1994. However, Swarajyam and Com VN continued to stand by the CPI(M). Comrade VN was well-known to the Telugu people as a warrior of the Telangana Peasants’ Armed Struggle, a secretary of the united Nalgonda district committee, and a member of the Party's Central Committee.

During her last years, even though physically weak to work among the public, Comrade Swarajyam continued to motivate the Party cadre to take up people’s causes. The 91-year old visionary stood as a tall reminder of the bravery of the Telangana Peasants’ Armed Struggle. She exuberated the spirit of revolution every time she raised her fist, offering Red salutes to her comrades even when she was on ventilator support. She was a beloved daughter of the Red flag. She cautioned the people about the dangers inflicted by the corporate forces, and the dangers posed by communalism in the country. She urged the Party cadre to work closer with the people and mingle with them and that it was the only way to overcome the exploitation of the ruling class. She reiterated that class struggle is the only way to end the exploitative system. Treading that path is the only real homage one can pay her.

COMRADE Mallu Swarajyam’s body was kept at the Party state office in MB Bhavan, Hyderabad for two hours to enable people to pay homage. It was then taken to the AIDWA state office where women paid their leader a final tribute. The ambulance carrying her body to the Nalgonda Medical College stopped on the way at several villages in Chityala and Choutuppal mandals where people, irrespective of political affiliations, paid their last respects. The people of Nalgonda town moved in large numbers and rallied to the CPI(M) office where her body was kept. Leaders of various political parties addressed the gathering and remembered their association with Comrade Swarajyam and paid her rich tributes. Polit Bureau members Comrades B V Raghavulu, Subhashini Ali, state secretary Thammineni Veerabhadram, CPI leaders K Narayana and Chada Venkat Reddy, state leaders of other Left parties, TRS MLC Kavitha and ministers Errabelli Dayakar Rao,  Jagadeesh Reddy, TRS and Congress MLCs, MLAs, Andhra Pradesh CPI(M) leaders V Srinivasa Rao, P Madhu, leaders and cadres of various mass fronts were among those who paid homage to Comrade Swarajyam. They vowed to carry forward her ideals. The last procession went all the way to the Medical College where her body was handed over as per her wish.