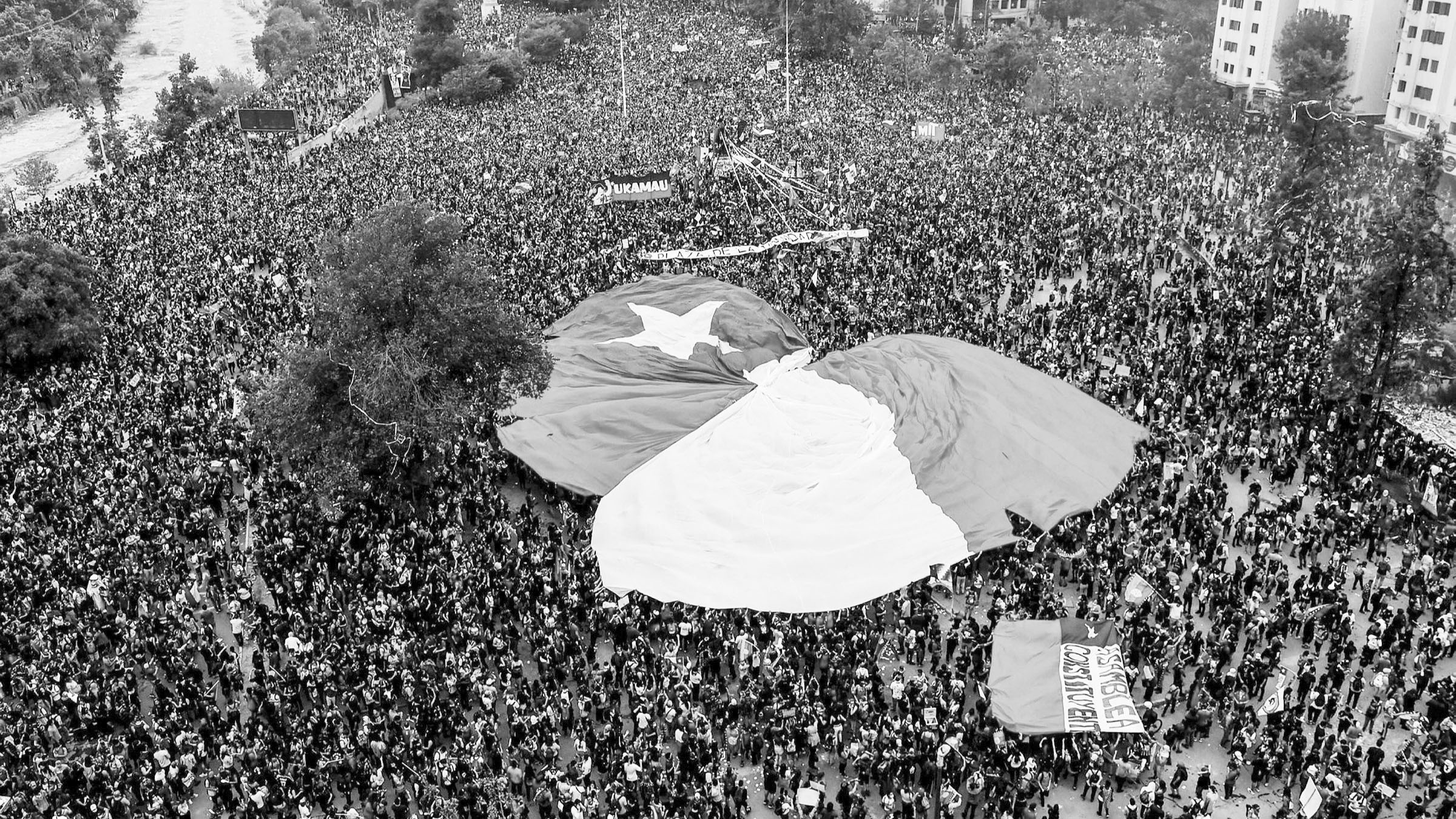 Chile: A Defeat for the Far-Right

ON December 19, Chileans voted for a new chapter in their long history. Gabriel Boric, a 35-year old former student leader, was elected as the new president. He secured 56 per cent votes and decisively defeated the far-right candidate Jose Antonio Kast, who got 44 per cent votes in the run-off elections. Boric’s victory was significant because it came on the top of nearly a decade long consistent protests against neoliberal policies by various sections. These were indeed the first elections since the end of dictatorship in 1990, where the two major ruling class parties – Independent Democratic Union (IDU) and the Socialist Party – are absent on the ballots due to their defeat in the first round itself.

Chile is a rich country in the Latin American region and a member of the OECD group. It was the first laboratory for the implementation of neoliberal economic policies. These policies were introduced by the dictator Augusto Pinochet, who led the coup against elected communist president Salvador Allende. As part of these policies, privatisation of services and the withdrawal of State from social welfare, strengthened the hands of oligarchic ruling classes. Common people were forced to depend on private players for most of their necessities, which further impoverished them. Privatisation of pensions, low salaries and high living costs pushed many into indebtedness.

Chile’s economy is predominantly dependent on copper and other mineral exports. If their prices are on the rise, the economy too is buoyant and vice versa. But irrespective of this rise and fall, economic benefits did not trickle down to the bottom layers of society, particularly the working class. In fact, income inequalities are very high. The effects of the economic crisis are also severely felt with increasing prices, low salaries and pensions. Services like education and health are very costly and inaccessible. One example of the sorry state of affairs is that nearly ‘10,000 people died in the first six months of 2018, waiting for an operation or treatment in the public health care system’. A woman in a poor neighbourhood lives 18 years less than a woman in a rich neighbourhood in the same city, according to the Lancet. Similarly housing is another major area of concern.

The first major struggle carried out by Chileans led to the ouster of Pinochet and restoration of democratic rights. But this did not translate into betterment of common people’s lives. What had come out of that struggle is a two-party system of Conservatives (IDU) and Socialists (Social Democrats) who did not differ much in their economic policies or adherence to neoliberal philosophy. The failure of socialists to radically demarcate from the conservatives, alienated people from them. People were disillusioned about the entire political system and kept away from elections. In the elections held immediately after the ouster of Pinochet, nearly 90 per cent of people voted. But by 2017, i.e., almost 30 years after these elections, only around 40 per cent voted. Nearly 80 per cent of the people were expressing their distrust on these two ruling class parties.

The Communist Party of Chile, which was a dominant political force and even got Allende elected as the president in the 1970s, was brutally suppressed. It lost many of its leaders and cadre during the dictatorship period. In the initial years of post-dictatorship era, they supported socialist candidates like Bachelet in elections. But through experience they found out that this was not helping them in any way due to the neoliberal policies pursued by her government. It is then they decided to establish the party’s independent identity and started concentrating on taking up people’s issues and organising struggles. Their persistent efforts bore fruit.

Communists were active among workers and students. The miners’ strike in 2007, led by communist leaders in the trade unions was a significant marker in popular mobilisations. They had mobilised the non-permanent, precarious work force employed in the mining industry and the public sector CODELCO (National Copper Corporation of Chile) in a series of protests and struggles that disrupted production for many months and forced the government to heed to their demands. They formed the Copper Workers Federation (CTF) and through unionisation of unorganised workforce, forced the government to recognise their contracts, increase their wages and earn such other benefits. More than 90,000 workers benefited from these struggles and formed the bed-rock of communist revival. The working class slowly started intervening in the political and social issues confronting the general population.

The student protests against exorbitant fee hikes in 2011 were another turning point. In 2011, students launched a series of occupations of campuses. The Occupy Wall Street movement and the protests in Egypt, Tunisia and the ‘occupation movements’ taking place across the world were the inspiration. Students in Chile took up the issue of privatisation and commodification of education. They demanded free, quality, public education. The State used police force to suppress these protests. In spite of these attempts to wipe out the protests and their impact on the society, they left a lasting legacy on the socio-political system. They were the first major protests that rocked the post-dictatorship period in Chile.

That decade witnessed regular protests by various sections, including pensioners. Hundreds of thousands of pensioners and retirees marched regularly against pension reforms and privatisation of pension funds. At a point of time, nearly two million pensioners marched in the capital city expressing their discontent against the pension policies, an off-shoot of neoliberalism.

Coordination between these various protest movements springing across the country was developed. Along with the sectoral demands raised by each of them, they succeeded in bringing into discussion the question of inequalities, neoliberal policies and projected their alternative programme of socio-economic and political reform.

Frenta Amplio (FA), the party represented by Boric, grew out of these student protests. Similarly, many other political forces, social movements, personalities emerged from these protests. Camila Vallejo, a student leader from the communist party is another major personality who led these protests and was elected as a member of the Congress, along with Boric in 2013. Nearly 20 leaders who were part of these protests got elected to the Congress. Apart from lending a voice to popular struggles, they had effectively used the Congress platform as another front to carry forward people’s struggles against neoliberalism. FA expanded its base from among students to teachers unions and other sectors. Maintaining their distance from both the established political parties, they were able to capture the imagination of people. In 2017 presidential elections, they secured 20 per cent of vote and emerged as a new Left force.

Consistent and patient efforts, without forgetting to intervene and lead militant protests on people’s grievances further galvanised people into actions. Many women’s groups and collectives were formed in college campuses and across the country. They raised the demands against sexual harassment, violence and abortion rights. Thousands of women started mobilising under these banners and joined with other sections. These waves of protest reached a crescendo in 2018. The increase in metro fares once again brought students on to the streets demanding a roll back. The women’s movement also reached its height at the same period, against the police brutalities and sexual assault on protesting students. More than two million women demonstrated in the capital city and simultaneous demonstrations were held in many other cities. These protests captured the imagination worldwide and gained support from many countries.

Working class too was not left behind and it rallied its forces against the wage freeze and rising costs of living at the same time. These coordinated actions raised demands against neoliberal policies and demanded a constituent assembly to re-write the constitution that was drafted in the Pinochet era. They identified the constitution as the basis for inequalities and neoliberal policies pursued by successive governments. The struggle waged by all these popular forces continued since 2018 through 2020, even during the pandemic. These sustained, consistent and militant struggles forced the government to concede their demands. A constituent assembly was elected, where the right-wing failed to win even one-third of the seats needed to influence its decisions. The victory of communists, FA and various streams of independents who are all opposed to neoliberal policies, reflected the belief placed on the Left forces. This confidence is further visible in the election of communists and FA candidates as mayors of various municipalities. The Communist Party was able to emerge from margins to win 20 per cent of national vote, while the FA secured 34 per cent.

Struggles and efforts to maintain their independent identity contributed in a major way to this steady growth of Left forces. It is these factors that contributed to the victory of Boric.

In the electoral primary to decide on the Left candidate, FA’s Boric defeated Communist candidate Daniel Jadue. The programmes proposed by both these candidates did not differ much – both of them proposed levying increased taxes on the rich, replacing the pension system with a public pension system, protecting the rights of indigenous people, strengthening public health and education systems. They also talked about establishing public control over mines, particularly that of copper and lithium. Their programmes promised to initiate steps to protect environment at all costs and pursue ‘green development’ projects. Critics pointed that both of them differ only in the pace with which these programmes are to be implemented. Jadue was for a more rapid implementation, while Boric was for a long-term approach. The communist party accepted that its proposals for radical implementation as yet did not succeed in catching the imagination of Chileans. Nevertheless, they promised to work for their implementation along with Boric and extended support to him.

On the other hand, Kast’s agenda supported neoliberalism and Pinochet era policies. He was a misogynist to the core. Kast is against the re-writing of constitution and demeaned protests that led to the establishment of the constituent assembly. He was all for nationalism and against immigrants. He modeled himself on the lines of Donald Trump of the US and Jair Bolsonaro of Brazil. He was an out and out representative of the ruling classes, who pledged to eliminate communist menace. His campaign tried to juxtapose democracy and liberalism with communism. Alas, all his efforts failed and people saw through his designs and defeated him comprehensively.

The victory of Boric is significant because it rode on popular struggles and represents the aspirations of people on the streets. It also defeated the far-right politically in the elections and also fought it ideologically. The next step is to build on this victory and work towards consolidation of all the pro-communist, Left forces.