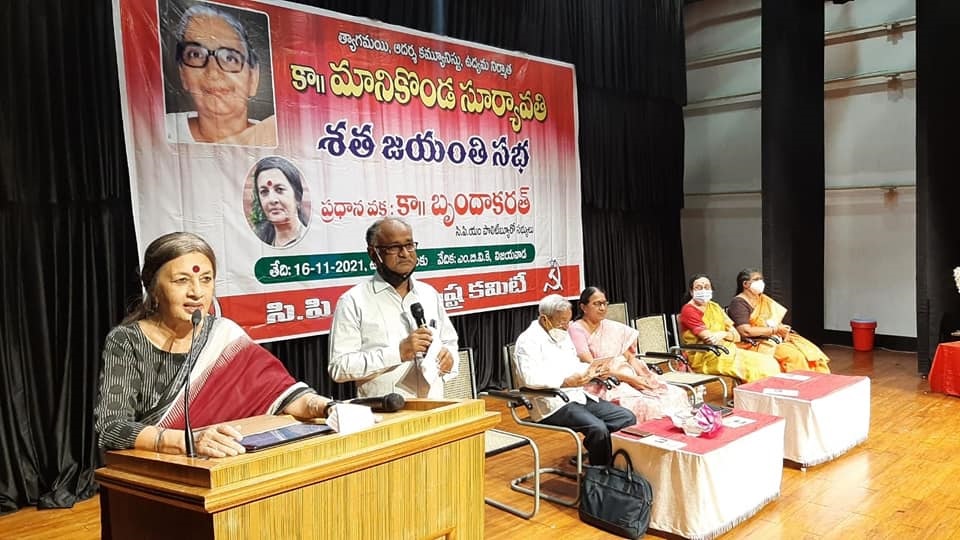 TN: ‘Youth…Come Forward to Break the Chains of Caste Discrimination’

IN Cuddalore district of Tamil Nadu, amidst heavy rains, two important events took place on November 19. One is the unveiling of a bronze statue of Karl Marx and the other is the massive convention demanding a separate legislation to curb honour crimes.

When the district committee took the decision of erecting a statue of Karl Marx, it came up with the novel idea of collecting brass vessels from the Party members and their families and create funds from their sale. When we visited the taluk committee Party offices to collect the vessels, it was very interesting to see a huge pile of vessels ranging from big pots to small lamps. Comrades were waiting eagerly to hand them over to us. We collected 1,070 kilos of brass which exceeded the target. The district committee put in the extra money and made the statue with 250 kilos of bronze. Prakash Karat, Party Polit Bureau member unveiled the statue and spoke briefly amidst thunderous slogans.

The huge hall, where the convention took place, was overflowing and more than 2000, braving rains, came on time to listen to the speeches. The leaders felicitated 15 couples of inter-caste marriage. A resolution was passed and an oath was taken to fight against honour crimes. Govindan who was one of the CPI(M) leaders who stood in the forefront and intervened in the  Kammapuram (Cuddalore district)      lock-up death of a tribal which was the theme of a recent film 'Jai Bhim' was felicitated amidst enthusiastic and emotional slogans.

Prakash Karat, while hailing it as an important convention, firmly called upon the state government to enact a legislation since the central government will not bring it in, due to their political and ideological positions. He charged that the so-called honour crimes are not only against the constitution but also human values themselves. Right to choose a life partner is applicable to all citizens and rejecting that reflects a deep feudal and patriarchal mindset. The roots of honour killings are connected to the patriarchal society which treats women as subordinates and as property of the family. Karat explained about the negative intervention of khap panchayats not only in inter-caste marriages but also in inter-faith marriages. He quoted Dr Ambedkar who said that, compared to social tyranny, political tyranny is nothing and that the reformer fighting against social tyranny is more courageous. He went on to add that most of the political parties treat castes as vote banks while CPI(M) is the only party which mobilises oppressed sections against caste discrimination, honour crimes and untouchability. He reminded that the Party Programme calls upon us to fight against caste oppression as part of class struggle. He recalled the steps taken by AIDWA, CPI(M) and NCW during the UPA regime for a separate legislation. He argued that the acquittal of the important accused in Udumalai Sankar's case by Madras High Court alone is sufficient to understand the need for such a separate legislation.

The convention was planned in the background of the recent judgement on a caste based honour crime which was committed 18 years ago. The young couple Kannagi and Murugesan of Pudhukooraipettai village near Vridhachalam were poisoned and cremated by Kannagi's relatives for their inter-caste marriage in full view of more than 100 villagers in 2003. The police covered it up as a suicide. CPI(M) was the first political party to expose it and to demand a CB CID investigation. Subsequently human rights lawyers like Rathnam and Sugumaran waged a consistent legal battle. The judgement handed out death sentence to Kannagi's brother and triple life sentences to the other accused. It is significant to note that two policemen were awarded life sentence for covering up the crime. It was a very welcome judgement.

The state of Tamil Nadu has seen a number of honour killings and the CPI(M), Tamil Nadu Untouchability Eradication Front and AIDWA have been intervening in such cases , supporting the victim families and fighting for justice.

In 2015, a huge public meeting of more than 5000 people was held in Cuddalore on the same subject which was addressed by Sitaram Yechury and state leaders G Ramakrishnan, K Balakrishnan and U Vasuki. This is the second such mobilisation which shows how the Party is taking on a deep rooted social injustice, entrenched in the psyche of the society.

The concluding remarks made by Prakash Karat calling on the youth of the state to come forward and break the chains of caste discrimination became the reverberating call of the convention and enthused the Party ranks of Cuddalore greatly.