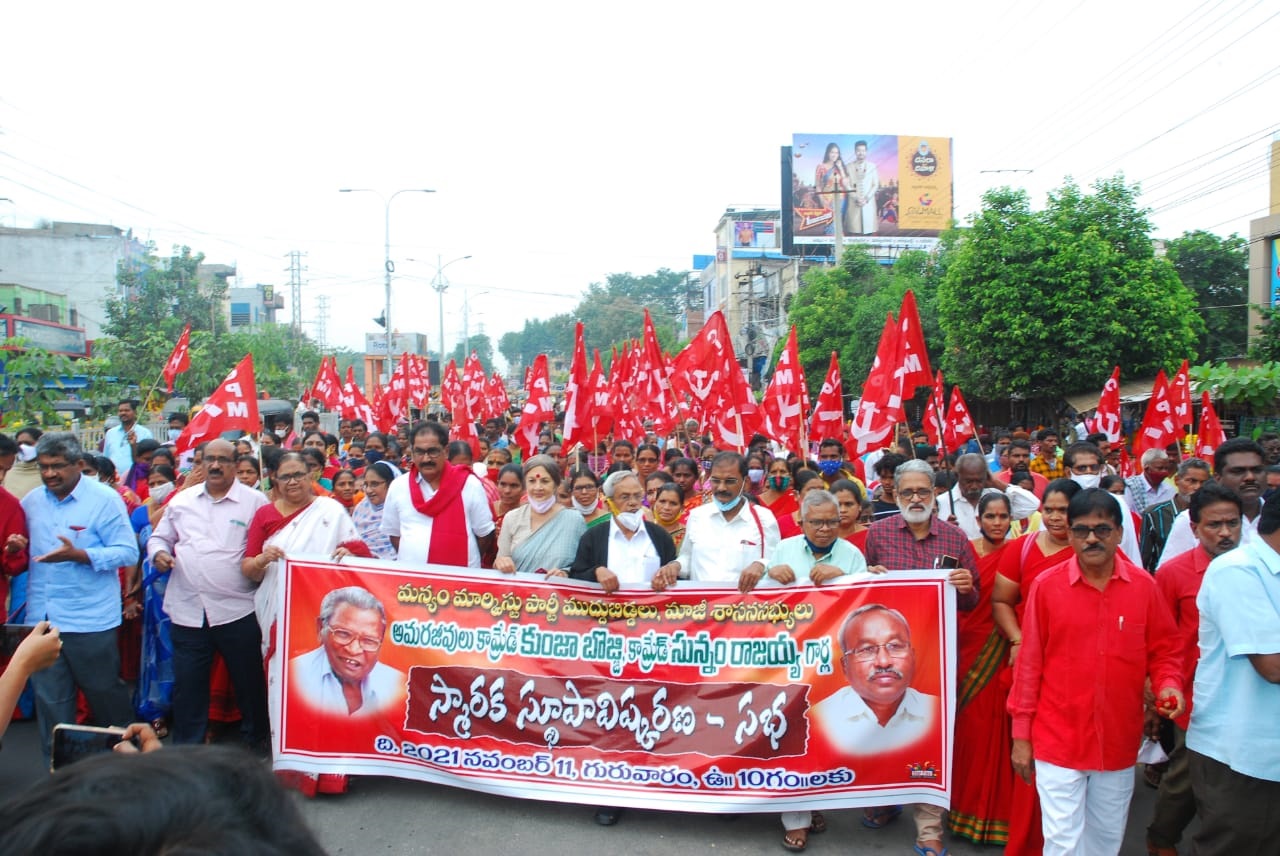 CPI(M) Polit Bureau member Brinda Karat unveiled the memorial stupas erected for Comrades Kunja Bojji and Sunnam Rajaiah, ex-MLAs of CPI(M) who lost their lives to coronavirus last year. Both the leaders were outstanding and dedicated party leaders of the agency areas and worked for the welfare of tribals and other peoples in both the Telugu states, she said.

Speaking at the memorial meeting on November 11, Brinda Karat said that the real tribute to the leaders would be for everyone to walk in the path laid by them. She called on the Party workers to remember the sacrifices of these leaders and move forward in building people’s movements. She recalled that as MLAs, Sunnam Rajaiah and Kunja Bojji, led simple and ideal lives.

Drawing contrast, Brinda pointed out that both in the state and at the centre, ruling parties are buying elected representatives with money and other attractions and using them for their selfish interests. She said that BJP has managed to capture a majority of the Lok Sabha seats reserved for the Schedule Tribes and yet they do not raise the issues of the tribal people in the parliament.

She criticised the BJP MPs and said that they don’t raise their voices even as the central government is diluting the forest laws. She said that both the central and the state governments are part of a conspiracy to evict tribals from their forest habitats.

Brinda Karat called upon the people of Telangana to fight against the hikes in fuel prices. She said that the central government is putting an immense burden upon the middle class and the working class families with such a steep rise in petrol and diesel rates.

She complemented the Telangana state committee of CPI(M) for organising protests  against the Modi government for Podu farmers, the tribal farmers who cultivate forest land, and succeeding in getting land pattas for them. She demanded that the cases foisted on the tribals during the agitation be withdrawn and that the farmers be paid compensation.

CPI(M) state secretaries of Andhra Pradesh and Telangana, P Madhu and T Veerabhadram attended the stupa inauguration, organised by the district committee of Bhadradri Kothagudem. The inauguration was preceded by a big rally organised from Bridge centre to the stupas venue.

Veerabhadram paid tributes to the deceased leaders and recalled the development activities done by them. He also took the opportunity to bring to the public notice that the central government is working hand-in-glove with the corporates and is diverting attention from farmers issues by  inciting  religious fanaticism. Even though the farmers have been agitating for the last 12 months, the central government is not showing any concern, he said. He said that the Telangana Rashtra Samithi (TRS) government in the state is supporting the BJP government in the centre and is deceiving the people by playing political gimmicks.

P Madhu said that the agency is the land of struggles and sacrifices of its people and that the BJP is inciting communalism by amending the laws. He said people are going to teach a lesson to the BJP in the upcoming elections.