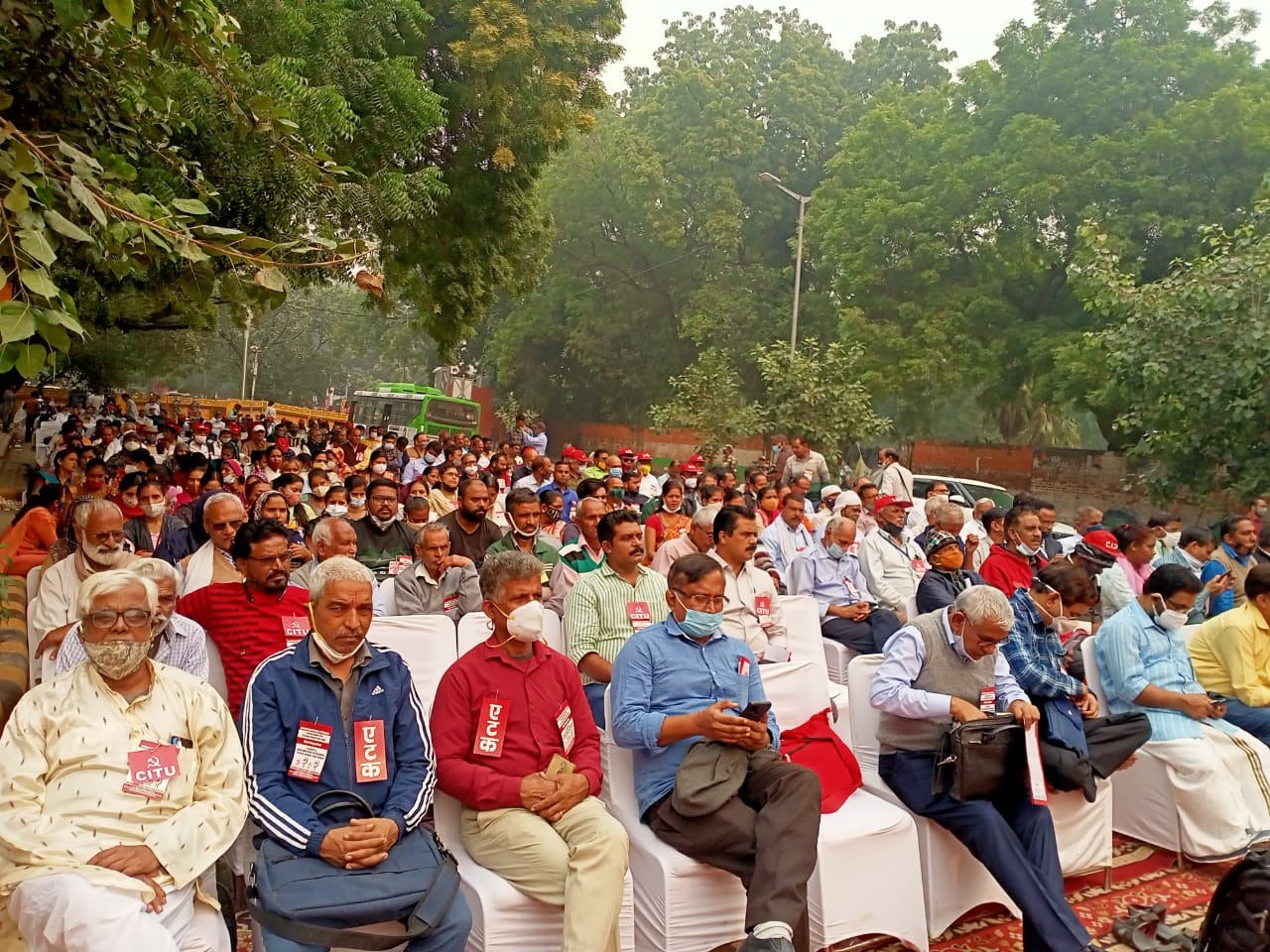 Two Days’ Countrywide Strike ‘To Save People and Save Nation’

THE National Convention of Workers held at Jantar Mantar on November 11 called upon the working class of the country to prepare for massive countrywide general strike during the budget session in February 2022, ‘To Save the People and Save the Nation’.

In view of the Covid-19 pandemic and the associated restrictions on big mobilisations, the trade unions decided to limit the participation to their state level cadres and leaders who will take the message of the convention to their members and the workers in general. Though a mobilisation of only around 500 was allowed, many more workers and union leaders from all over the country, including from far off states like Tamil Nadu, Kerala etc and from many sectors including insurance, banks, railway, telecom, state and central government employees in addition to industrial workers, scheme workers and unorganised sector workers, participated in the convention. Significantly, the leaders of Samyukta Kisan Morcha spearheading the farmers’ struggle against the three farm laws, Electricity Amendment Bill and for legally guaranteed MSP also attended the convention as guests.

The convention passed a resolution paying condolences for the death of  V Subbaraman, president of LPF, the nearly 700 farmers during the ongoing farmers’ struggle, the thousands of workers, trade union leaders and cadres who have passed away due to Covid-19 during this period and observed silence in their memory.

All the speakers referred to the ongoing heroic struggle of the farmers and to the support and solidarity being extended by the workers to their struggle. They called upon the delegates to carry the demands of the convention up to the grassroots level through different joint activities mentioned in the Declaration and ensure total strike in the entire country during the budget session, the dates of which would be decided at the earliest. They urged the delegates to start the campaign immediately after going to their respective places.

Tapan Sen highlighted the importance of linking up each and every one of these issues with the policies being adopted by the BJP government. He said the present BJP government led by Modi was not only anti-worker, anti-peasant and anti- people but it was also anti-national, handing over the country’s wealth to the big corporates including foreign monopoly companies free or at throwaway prices. He called upon the delegates to take up the task of ‘Mission India’ to defeat the BJP, of which ‘Mission Uttar Pradesh’, ‘Mission Uttarakhand’ and ‘Mission Punjab’, would be integral parts. He asserted that joint struggles of workers and peasants, the two forces that produce the wealth of the country will be indomitable and no force on earth can defeat them. He called upon the delegates to strengthen such unity overcoming the machinations of the BJP and RSS to divide the workers and the people on the basis of religion, caste, etc.

The Declaration was later passed unanimously after the presidium declared that the few suggestions from delegates on certain issues like NPS, contract workers etc would be incorporated.

The demands adopted by the convention include:

These demands will be focussed in the campaign along with other demands already formulated and being pressed for by the Joint Platform of CTUs and Federations/Associations.

The convention adopted the following programme of action:

The national convention called upon the working people and people in general to make the two days countrywide general strike a massive success to further heighten the ongoing united struggle to “SAVE THE PEOPLE AND SAVE THE NATION”.