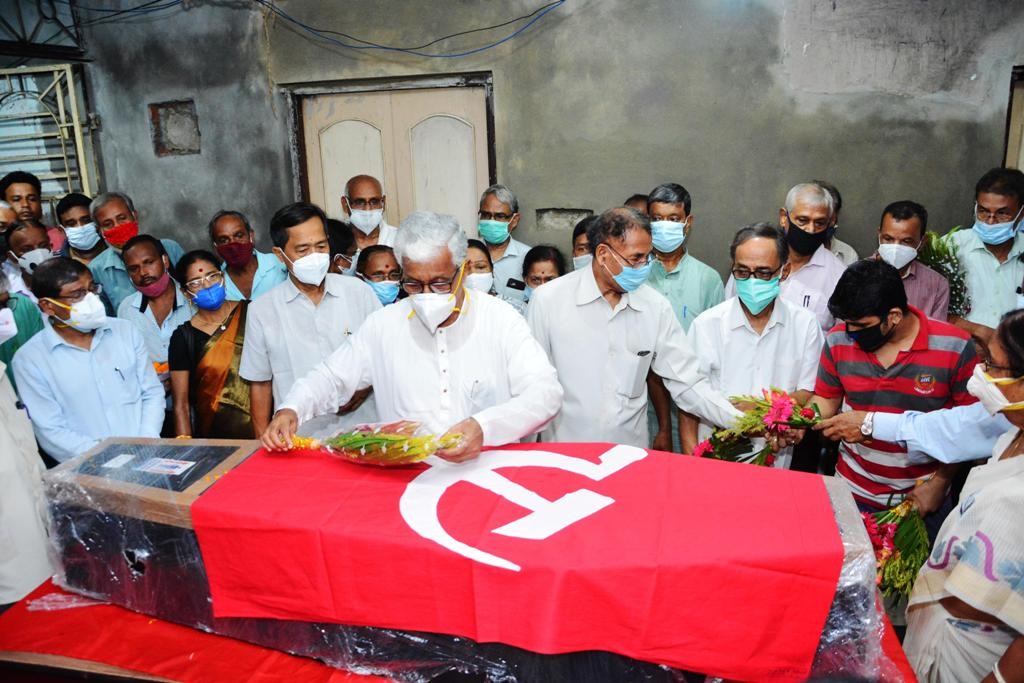 CPI(M) CENTRAL Committee member, convener of Tripura Left Front Committee, former state secretary of Party Tripura unit and, an eminent socialist ideologue Comrade Bijan Dharhas breathed his last at the dawn of October 11, 2021, while in treatment in a private hospital in Kolkata. He was 71 years old. He was a chronic diabetic patient for the last 40 years.  He is survived by his wife Ila Dasgupta, daughter Gopa Dhar, many relatives and his innumerable admirers.

Being diagnosed as Covid positive, he was admitted to GB Panth Hospital, Agartala on September 16.Being unable to control infection in lung, the doctors advised to shift him to Kolkata for better treatment. Accordingly, he was flied to Fortis Hospital, Kolkataon September 19.

Comrade Bijan Dhar was born in 1951 in a remote village in Comilla district of then East Pakistan (now Bangladesh) in a family headed by late Ananta Krishna Dhar, a renowned educationist. From the school life he was involved in student’s movement. He had a laudable contribution in leading students’ movement on various issues related to the students’ problems and building up a statewide organisation.  He was president of ‘Students Federation’ in the sixties which was affiliated to SFI subsequently. Comrade Bijan Dhar attained CPI(M) membership in 1969.

During nationwide emergency in 1975, he had gone underground and later he was arrested by police and detained in jail for a year along with other Party leaders.

In the 10th state conference of the Party in 1978, Comrade Bijan Dhar was elected to the state committee and discharged responsibility as secretary of Sonamura sub-divisional committee till 1995 when he became state secretariat member. He was assisting the then state secretary, Comrade Baidyanath Majumder in state centre functioning. In 17th Party Congress in 2002 he was elected to the Central Committee of the party. For long 11 years from 2008 to 2018 heled the Party successfully in the face of many stormy situation that appeared before it. He was relieved of the responsibility as state secretary and was given new assignment as convener of Tripura Left Front Committee in 2018. He showed decent endure and sincerity in strengthening unity and integrity of the Left Front and mutual fraternity among the constituent parties.

Comrade Bijan Dhar dedicated his entire life in building up united struggle of the working people cutting across tribals and non-tribals, religion, race and gender.

On September 8, while some frenzied BJP miscreants stormed into the state committee office and started destroying everything by setting the office on fire, Comrade Bijan Dhar showed courage to confront them face to face asking “What are you doing?”. But the cowardly BJP youths had no response. Now this question is beeping in the whole state, among all sections of the people questioning the mal-performance of the government.

Comrade Bijan Dhar was an eminent Marxist ideologue. He made an invaluable contribution in guiding and expansion of party education in the state.

CPI(M), Tripura state secretariat in a condolence message deeply mourned the demise of Comrade Bijan Dhar and conveyed profound respect to his memory, expressed heartfelt sympathy to his kins. During the three mourning days, red flag of all the party offices in the state will remain half-mast and all programmes will be kept suspended, the statement informed.

The Polit Bureau of the Communist Party of India (Marxist) has issued the following statement on October 11, 2021:

THE Polit Bureau of the Communist Party of India (Marxist) expresses profound shock and grief at the death of Bijan Dhar, a member of its Central Committee and former secretary of the Tripura state committee of the Party. He died this morning at a Kolkata hospital where he was undergoing treatment for Covid. He was 70 years old.

During the Emergency in 1975-77, he had remained underground for more than a year before he was subsequently arrested and jailed for five months.

Erudite and well versed in Marxist theory, he contributed immensely to educate the rank and file of the Party in the state.

Despite various health complications, Bijan Dhar continued to work tirelessly displaying a high level of commitment to the cause of the Party. His departure, coming at a time when the Party is valiantly facing vicious and violent attacks in Tripura as also the death of his colleague Gautam Das, last month, is a great loss for the Party.

The Polit Bureau conveys its heartfelt condolences to his wife Ila Dasgupta, daughter Gopa Dhar and other members of his family.