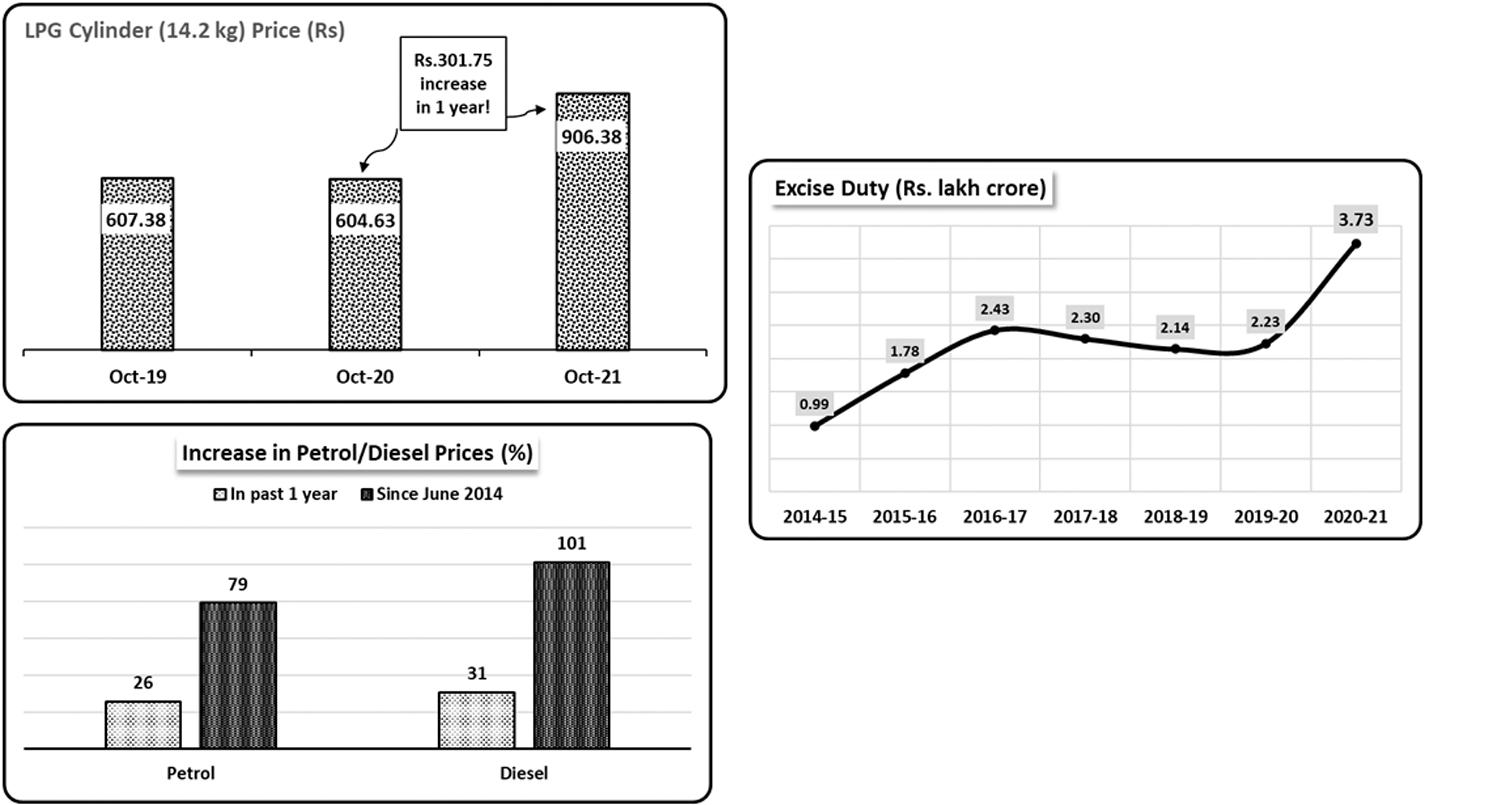 COOKING gas (LPG) cylinder prices were jacked up again a week back. Average price across four metros of the usual 14.2 kg cylinder is now an astonishing Rs906.38. One year ago, in October 2020, the cylinder’s average price was Rs604.63. This is data for Indane gas, as recorded in the website of Indian Oil Corporation Limited (IOCL), a government undertaking.

So, in just one year, its price has zoomed up by Rs301.75. While prime minister Modi and his party has repeatedly sought public approval for his “free” cooking gas scheme for poor households, the end of gas subsidy and the unbridled increase in gas prices has made it difficult for families to use it for cooking.  The increase in past one year is particularly cruel because this was a time when the pandemic and the lockdowns had snatched away jobs, slashed earnings and pushed millions to the brink of hunger.

Similar is the case of petrol and diesel prices. Average prices across the four metros have increased by 26 per cent for petrol and 31 per cent for diesel in the past one year. This has a cascading effect on prices of all commodities because transportation costs go up and consumers have to pay more for vegetables, other food items, and indeed for diverse kinds of consumption items. That’s not all. Increased diesel costs also means that farmers’ production costs go up since a vast number of them are dependent on diesel gensets for irrigation and other agricultural operations. Usually, this is not compensated by commensurate selling prices – so the hapless farmers end up with even lesser earnings.

ote that this increase in prices of petroleum products is not some aberration for one year. Since Modi came to power in 2014, petrol prices have gone up by a whopping 79 per cent and diesel prices by 101 per cent. All data on petrol and diesel prices is taken from the Petroleum Planning & Analysis Cell (PPAC) which functions under the Ministry of Petroleum & Natural Gas.

WHAT’S BEHIND THIS HIGH PRICES?

The government or BJP leaders often try to suggest that the increase has taken place because petrol/diesel prices are now linked to the market and if international prices go up, domestic prices have to be increased. This is totally false.

The real reason is this: whether international prices are rising or falling, Modi government has been relentlessly increasing excise duty on petroleum products, as the accompanying graph shows. Data is from PPAC.

In financial year 2020-21, the Union government collected a record breaking Rs.3.73 lakh crore excise duty from petroleum products. That was amind-boggling increase of Rs.1.5 lakh crore or 67 per cent over the previous year. Since Modi came to power in 2014, excise duty collections from petroleum products has increased from about Rs99,000 crore to Rs3.73 lakh crore – an increase of nearly 277 per cent in seven years!

Besides excise duty which is levied by the central government, it also collects various other taxes including GST etc. Those have also increased over this period but not to the same extent. Total tax collections from petroleum products stand at Rs4.2 lakh crore in 2020-21, out of which Rs3.73 lakh crore or about 90 per cent is from excise duty alone.

It is noteworthy that the pandemic and lockdowns over the past year had curtailed consumption of petroleum products – and yet, the Modi government has managed to gobble up an even higher amount from excise collections by pushing up the duty rates repeatedly.

WHAT’S THE MODI GOVERNMENT DOING WITH THIS MONEY?

It is often wondered why the Modi government squeezes people so much through indirect taxes like excise duty on petroleum products. The answer is quite simple: it doesn’t want to increase taxes on the rich, and in fact, it wants to give then more concessions. So, it is deploying a whole set of policies to raise resources. These include indirect taxes on people (like the one discussed above), cutting funds for various social welfare programmes, not filling up government vacancies, selling off public sector assets at whatever low price, leasing out roads, ports, telecom infrastructure, railways stations and routes and other key physical assets of the country to private profiteers, and so on. Money raised from these measures is not used for benefit of the people but rather it goes towards writing off bank loans taken by corporates, giving exemptions from taxes, making up loss due to cutting corporate tax, and other such largesse for the super-rich classes of the country.

In short, sky high taxes on petroleum products are yet another facet of the planned strategy of the Modi government to squeeze the last paisa out of common Indians and transfer it to coffers of big business and foreign monopolies.