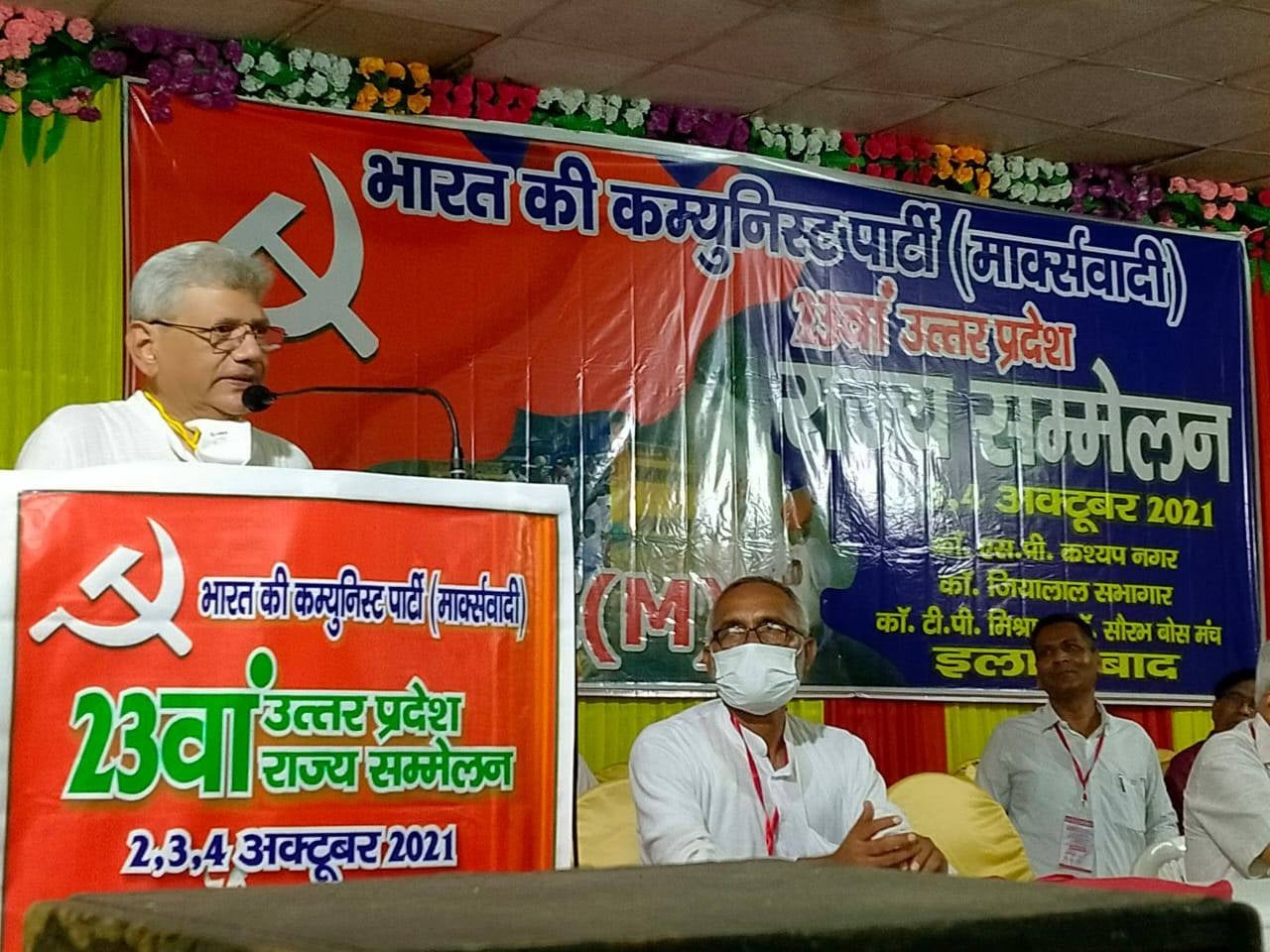 THE 23rd state conference of CPI(M) concluded with the resolve to intensify the struggles and mass movements and expand the Party base.

On the occasion of Gandhi Jayanti on October 2, the three-day conference started with a seminar in Allahabad. Speaking as the keynote speaker at the seminar, Prakash Karat, former general secretary of the Party, while remembering Gandhi said that today when we remember Gandhiji, we have to remember who were the forces behind his assassination.

“The freedom struggle was fought on the basis of Hindu-Muslim unity and Gandhiji had a clear understanding that Hindu and Muslims are the two eyes of India. Gandhiji was most saddened by the massacre at the time of the partition of the country, he sat in the riot-hit area to calm the riots. He did not even participate in the celebrations of independence, but the forces who wanted to make independent India a Hindu nation, did not like this principle of Gandhiji and they conspired to assassinate him,” Prakash Karat explained.

He further said, behind the murder was the ideology which stood against the tradition of freedom and the same people are in power today. Today Modi talks of ‘New India’, which he repeats every 15th August from Red Fort for three years. His New India is a nexus of Hindutva and Corporate. They attack the constitutional rights of Kashmiris by abolishing Article 370 in Kashmir, laying the foundation stone of Ram Temple and bringing a law to identify citizenship on the basis of religion.

During the pandemic, crores of jobs were lost, employment got ruined, but the corporate made profits manifold. The mismanagement of the Corona has claimed lakhs of lives and today Modi is boasting of free vaccines. Preparations are on to make it a museum. Modi's New India means becoming America's junior partner. There is widespread resistance across the country against their policies. Farmers are agitating for 10 months, against the sale of steel plant in Visakhapatnam for eight months. What is needed today is that all secular, democratic forces must mobilise and challenge the dangerous designs of BJP RSS.

Subhashini Ali member of the Polit Bureau recalled Gandhi's contribution to the freedom movement and said that Gandhi made this movement a mass movement and mobilised the general public. Gandhiji was against inhumanity considering the caste system. He focused himself on two questions, untouchability and secularism. He lived with the dalit families but today in the country dalits have been marginalised and they are victims of violence and discrimination day by day. Today the ruling ideology is governed by Manusmriti, which does not believe in the Constitution. To defeat these divisive and hate-spreading forces, we have to fight with courage.

Party Central Committee member, J S Majumdar said that for the first-time during Modi's regime, the vaccine business is being done. Speaking in support of the farmers' movement, he said that Mission Uttar Pradesh has started, which we have to strengthen.

In addition to the delegates of the conference, a large number of writers, cultural workers and intellectuals of Allahabad district participated in the inaugural session.

Addressing the concluding session of the conference, the party's general secretary, Sitaram Yechury, said that the British government was forcing the farmers to cultivate indigo in Champaran for their profits, against which Gandhi started the farmers' movement and won. Today's kisan movement is against the laws governing handing over of agriculture and agricultural produce to the corporates by the Modi government. The BJP government at the centre and in Uttar Pradesh is adopting a dictatorial attitude towards this movement and is suppressing it. RSS wants to establish a fascist Manuwadi guided State in the country. The BJP government is trying to destroy the basic four pillars of democracy. It is suppressing the protest movement and undermining economic sovereignty. By privatisation, the government is surrendering and giving the slogan of self-reliant India.

Laws are being made without discussion in Parliament. Independence of the Election Commission of India, CBI, ED, etc., has been abolished and they have been made the machinery of the government. Freedom of the individual is in danger.

The goal of our party is socialism. Following the ideals of Shaheed Bhagat Singh, a society without exploitation is to be established. For this, active participation in the struggles of farmers, labourers and other struggles of the people should be intensified. Will have to take a pledge to save, for this it is necessary that the BJP rule should be ended. He called for defeating the BJP in Uttar Pradesh through peasant labour movements and struggles.

The report of the state committee was placed in the conference by Hiralal Yadav, state secretary of the Party on which 55 delegates participated in the debate.

Resolutions were passed in the conference against communalism, on labour laws, on the problems of Scheduled Castes, Scheduled Tribes, on rising inflation and price rise and in support of the peasant movement.

A 35-member state committee was elected in the conference, with Hiralal Yadav as its secretary.

A condolence motion was passed and a protest march was taken out for the farmers killed in the attack by BJP leaders in Lakhimpur Kheri. All the delegates including Sitaram Yechury, Subhashini Ali and Hiralal Yadav participated. The conference ended with the resolution to intensify the people's struggles and the presidential vote of thanks for the expansion of the party's base in the state.