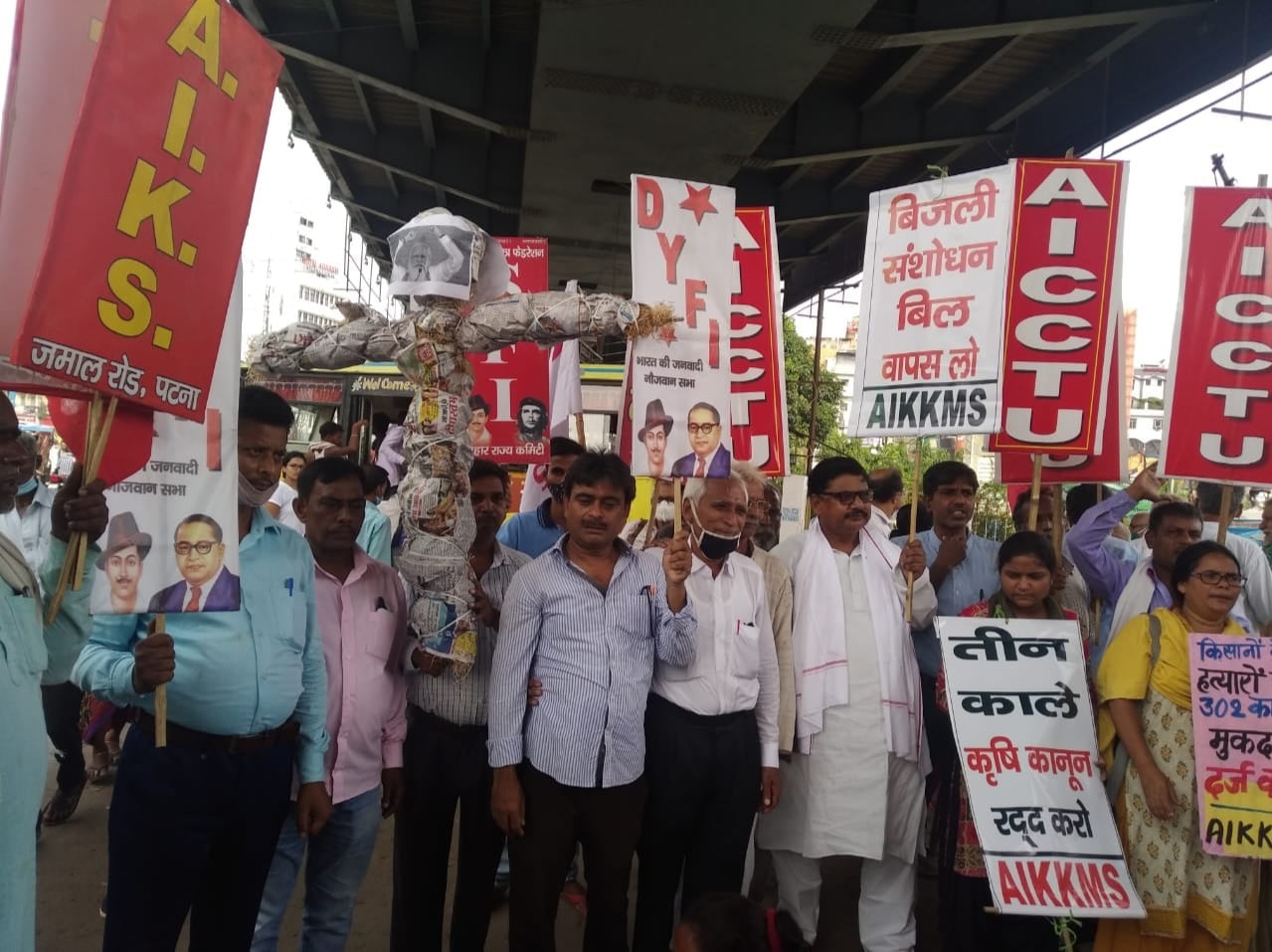 IN a brutal and inhuman attack on peacefully protesting farmers led by the Samyukta Kisan Morcha (SKM) at Tikonia in Lakhimpur Kheri district of Uttar Pradesh on October 3, 2021, a convoy of vehicles associated with BJP's union minister of state for home Ajay Mishra Teni, his son Ashish Mishra Teni, and other goons ran over several farmer protestors. It is reported that one of the farmers was shot dead by the son of the union minister. Four farmers and one local journalist were killed in the incident, and several others were seriously injured. Terai Kisan Sanghatan and SKM leader Tajinder Singh Virk was also seriously injured.

Thousands of farmers started assembling from the morning of October 3 in Lakhimpur Kheri district of Uttar Pradesh for a black flag protest against Uttar Pradesh deputy chief minister Keshav Prasad Maurya and union minister of state Ajay Mishra Teni, for the latter’s open threat issued against farmer leaders in a public meeting. The farmers with black flags occupied the helipad at Maharaja Agrasen Ground to prevent the deputy CM from landing there. The brutal attack on farmers happened as the farmers were dispersing and leaving from the protest site. Teni's son, uncle and other goons are then reported to have run over the protestors who had lined up on the roads with black flags.

On the very same day, October 3, in another condemnable development, Haryana chief minister Manohar Lal Khattar was heard in a video clip encouraging BJP-RSS men to pick up lathis and attack farmers, even if this means ending up in jails for a few months! While the farmers' movement has explicitly made peace and non-violence as its values, it is clear that the BJP governments are acting with murderous intent on their own citizens. SKM condemned the BJP CM's violent intent and demanded that he resign from his constitutional post.

This is the third serial murder of farmers by the BJP within around a month. The first was the murder of Sushil Kajal of Karnal in Haryana on August 28, as a result of the brutal police lathi charge by the BJP-JJP’s Haryana government, for which orders “to break the heads of farmers” were given by the notorious SDM Ayush Sinha, obviously under the directions of chief minister Manohar Lal Khattar. The second was the equally brutal killing of two Muslim farmers Saddam Hussain and 12 year-old Sheikh Forid on September 23 by police firing ordered by the BJP’s Assam government. Chief minister Himanta Biswa Sarma was shameless enough to hail the police action. The third is the mowing down of four farmers Gurvinder Singh (19), Lovepreet Singh (20), Daljeet Singh (35) and Nachattar Singh (60) and a journalist Raman Kashyap on October 3 in the Lakhimpur Kheri massacre by BJP hoodlums in Uttar Pradesh. Besides these killings, over 605 farmers have died as martyrs on the Delhi borders during the last 10 months.

Eye witness accounts reveal how the murderous attack seems to be pre-planned, facilitated by the UP police. It is reported that police removed barricades to allow the vehicles of the minister's son, who himself was driving the Thar vehicle, to mow down protestors indiscriminately, and the farmers retaliated thereafter. The police helped Ashish Mishra Teni in escaping from the scene, and it is reported that he fired as he escaped. The specific targeting of SKM leader Tajinder Singh Virk was narrated in eye witness accounts.

After the brutal and barbaric incidents in Lakhimpur Kheri, where four protesting farmers and a local journalist were mowed down by vehicles to their death, there were questions raised by the Godi media and by the notorious BJP-RSS IT cells about the protestors and their violent behaviour. It was only a matter of time that the true narrative of the reality of the incidents in Lakhimpur Kheri had to emerge.

Accordingly, a shocking video emerged on October 5, which forced even Godi TV channels of India to demand justice by their own standards, even though no media house offered any apology and correction for the false and spurious narrative that was spun since October 3. In this video, the explanation given by the minister Ajay Mishra Teni and his son was proved to be false. The vehicles of the minister fatally mowed down peacefully walking unaware protestors who were returning from their protest. Many eyewitness accounts are now being released on videos which also reveal that the minister's son Ashish Mishra was indeed driving the 'Thar' vehicle, from which he later got down and ran away, with cover and support provided by the police, and while firing on protestors. The journalist Raman Kashyap's family pointed out that he also got killed by vehicles crushing him.

In an urgently convened virtual press conference, members of the nine-member coordination committee of SKM addressed the media with regard to the ghastly incidents in Lakhimpur Kheri. SKM's Richa Singh and Guramneet Mangat who were in Lakhimpur Kheri (the former during the occupation of the helipad in Tikonia earlier in the day and the latter throughout the murderous incidents also) also shared the details of the shocking events.

The SKM demanded that the Uttar Pradesh government must immediately impose cases with murder charges under IPC Section 302 against all those involved from the side of Ajay Mishra Teni, and the union minister must be dismissed immediately. The SKM also demanded a judicial inquiry by a sitting judge of the Supreme Court.

The Yogi Adityanath-led BJP Uttar Pradesh government tried numerous undemocratic ways of preventing various people going to Lakhimpur Kheri, whether it was SKM leaders, social activists, or political leaders. Many SKM leaders were arrested when on their way to Lakhimpur Kheri. Section 144 was imposed, and internet services were suspended. The UP government went to the extent of disallowing certain people from arriving into, and leaving from particular airports, and also wrote to the Punjab government, asking that no person from Punjab should be allowed to enter Lakhimpur Kheri. The prevention of leaders of the opposition from visiting the spot, including the former chief minister of Uttar Pradesh and two sitting chief ministers (of Punjab and Chhattisgarh), and disallowing the landing of a deputy chief minister show the panic of the Yogi regime. All these incidents clearly show that the UP government has something to hide, and is protecting the culprits. Such draconian measures are unprecedented. SKM condemned all these undemocratic measures of the Uttar Pradesh BJP government.

On October 4, an agreement was reached between SKM leaders along with local protesting farmers and families of the deceased, and the state administration, which paved the way for the last rites to be performed of the martyred farmers, after the postmortem. The bodies of the four martyrs had been kept in an overnight vigil by thousands of farmers and their families in Tikunia's college ground. The state government will give Rs 45 lakh each and a government job each to the families of the farmers who were killed. The injured will be given Rs 10 lakh each. An FIR has been registered against Ashish Mishra Teni and 15 others under Sections 302, 120B and other charges, and the government said that it will arrest all the accused within a week. A case has been registered against union minister Ajay Mishra Teni also, under Sections like 120B. The government has agreed to get a retired High Court judge to probe the matter. The demand for Ajay Mishra Teni's dismissal from the union government is still pending.

Among those SKM leaders who took part in the negotiations with the state government and later addressed the huge condolence meeting in Tikonia were BKU leaders Rakesh Tikait, Dharmendra Malik and Rajvir Jadaon, AIKS leaders D P Singh, Mukut Singh and Chandrapal Singh, and also Gurmeet Mangat, Jagtar Singh Bazwa and Baba Anup Singh. The huge meeting was attended by thousands of Hindu, Muslim and Sikh farmers in a spirit of exemplary unity.

The agreement with the administration on October 4 was only to pave the way for the last rites of the martyrs to be performed. The key demands of SKM remain, and it will soon announce a programme of action for getting these demands met.

MASSIVE COUNTRYWIDE
PROTESTS
SKM called upon all farmers' organisations across the country to protest at government offices in all districts on October 4, to press for the above demands. SKM appealed to all citizens participating in the farmers' movement to continue their protests peacefully and non-violently, as they have done all the past ten months. The movement recognises the various dirty ways in which BJP-RSS forces are desperately trying to break it, and will combat any such attempts by holding on to satya and ahimsa, said SKM.

There were spontaneous protests in response to the massacre in Lakhimpur Kheri from October 3 night itself, when candlelight marches and rallies were taken out in places like Ambala, Kurukshetra, Chandigarh and others. In Puranpur and elsewhere, highways were jammed by protesting farmers. Thousands of farmers poured into Tikunia on October 4, at the site of the violent incidents, where the bodies of the martyrs were kept.

On October 4 and 5, large protests were organised at DC/DM offices and other locations in many places across the country. Reports have come in from Punjab, Haryana, Uttar Pradesh, Uttarakhand, Odisha, Bihar, Jharkhand, Rajasthan, Karnataka, Telangana, Tamil Nadu, Madhya Pradesh, Maharashtra, West Bengal and other states about these protests. A protest organised outside UP Bhawan in New Delhi ended with scores of protestors being picked up and detained for many hours by the Delhi Police in Mandir Marg Police Station.

In stark contrast to the violence let loose by the BJP governments and its leaders, the farmers' movement marked the birth anniversaries of Mahatma Gandhi and Lal Bahadur Shastri with great respect and renewed inspiration on October 2. A one day fast was observed in the morchas to mark the occasion. Across India, farmers' groups organised events to mark the day in memory of the two great leaders who shaped our nation's independence, destiny and ethos towards rural India. "Jai Jawan, Jai Kisan" is a slogan that reverberates to this day in the farmers' movement, a slogan coined and made popular by Shastriji. It is a slogan that makes farmers of the country feel proud and recognised for their immense contributions. The farmers' movement has been running peacefully for the last 10 months, based on the strength of satya and ahimsa, the touchstones of Gandhiji's satyagraha philosophy. It will continue to do so, facing and overcoming all odds.