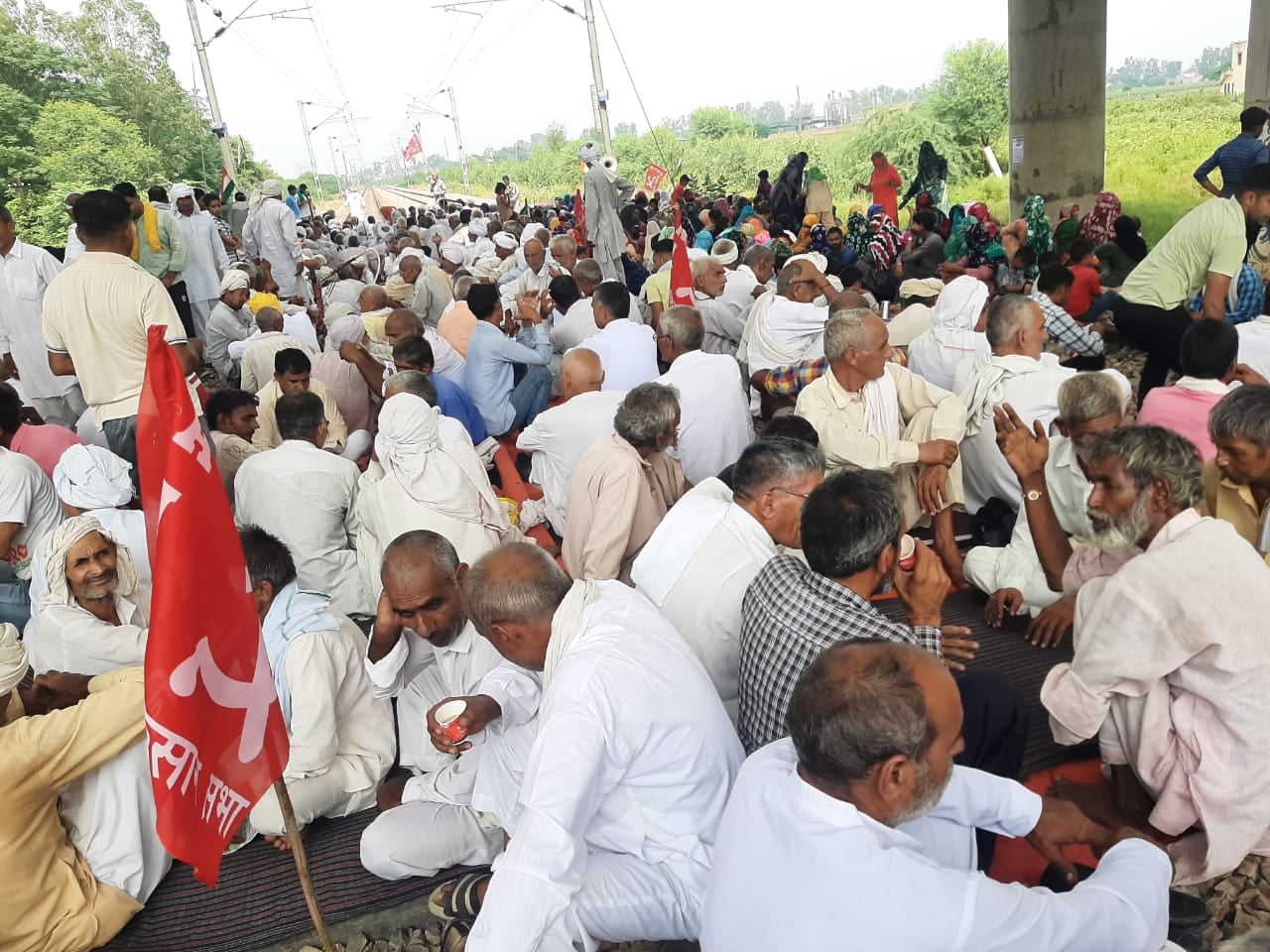 THE Bharat Bandh on September 27, 2021 was truly historic. In breadth, sweep and intensity, it surpassed the earlier two Bharat Bandhs in solidarity with the unprecedented farmers’ struggle, on December 8, 2020 and March 26, 2021. It was called by the Samyukta Kisan Morcha (SKM) to coincide with the completion of 10 months and 305 days of this struggle, which has led to 605 kisan martyrs so far.

It was exactly a year ago on September 27, 2020, that the president of India Ram Nath Kovind had given presidential assent to the three anti-farmer, anti-people and pro-corporate farm laws, which were rammed through parliament by the Modi regime by murdering parliamentary democracy, on September 17 in the Lok Sabha and September 20 in the Rajya Sabha. A few days later, on September 29, the same government rammed through parliament three of the four anti-worker and pro-corporate labour codes. The first code on wages was enacted by the same Modi regime in 2019.

The Bharat Bandh was actively supported by several opposition parties, all central trade unions, and hundreds of organisations of agricultural workers, employees, traders, transporters, women, youth, students, teachers and lawyers. Thousands of images of the Bharat Bandh success have come on the SKM, AIKS, CITU and other social media. Many of the mainstream print and electronic media had to give coverage to this massive action.

The hypocrisy of the TMC regime in West Bengal was on full display when, on the one hand, it made empty noises in support of the farmers, but on the other, not only opposed the Bandh call but also made its police rain blows on CPI(M) and Left activists on the Bandh day. The BJP government in Tripura too launched several repressive attacks on the CPI(M) and the Left.

The Bharat Bandh was clearly directed against the anti-people and pro-corporate policies and also the communal and authoritarian conspiracies of the BJP-RSS regime led by Modi and Shah. Some of the main issues that were highlighted in the Bharat Bandh were: Repeal of the three farm laws and the four labour codes; withdrawal of the Electricity Amendment Bill; central law to guarantee minimum support price (MSP) for all agricultural produce at one and a half times the comprehensive cost of production (C2+50 per cent); an end to the privatisation drive aimed at selling off the public sector and the country to corporates for a pittance; halving the astronomical prices of diesel, petrol, gas and other essential commodities; doubling the days of work and wages in the MGNREGA, and extending this scheme to urban areas; and defending democracy, secularism and the constitution against the attacks of the RSS-BJP.

The detailed SKM press statement released on September 27 stated that in hundreds of locations bandh was observed in Andhra Pradesh, Assam, Bihar, Chhattisgarh, Delhi, Gujarat, Haryana, Himachal Pradesh, Jammu & Kashmir, Jharkhand, Kerala, Karnataka, Madhya Pradesh, Maharashtra, Odisha, Pondicherry, Punjab, Rajasthan, Tamilnadu, Telangana, Tripura, Uttar Pradesh, Uttarakhand, and West Bengal, and numerous events also accompanied the same. In Punjab alone, there were more than 500 locations in which people gathered to express their support to the bandh, and their participation in the farmers' movement. Similarly, the bandh witnessed numerous non-farmer associations stand in solidarity with farmers, and also raise their own issues. Lakhs of citizens took part in the bandh events.

The statement said: “Life came to a near standstill in several states like Kerala, Punjab, Haryana, Jharkhand and Bihar. Reports indicate that in several parts of southern Assam, Karnataka, Tamilnadu, Maharashtra, Rajasthan and Uttarakhand, the same was the situation. Scores of protests marked the day in states like Tamilnadu, Telangana, Karnataka, Rajasthan, Uttar Pradesh and Uttarakhand. In Jaipur and Bangalore, tens of thousands of protestors joined protest rallies taken out in the cities. The overall mood across the country was of anger and frustration with BJP-RSS policies that the Modi government is enforcing, curbing basic freedoms and democracy, and putting most citizens on the path of survival struggle. It is patently clear that the people of India are tired of the Modi government's adamant, unreasonable and egoistic stand on protesting farmers' legitimate demands, and anti-people policies in numerous sectors.

“The response to this bandh call was more widespread than before. Nearly all opposition political parties had extended unconditional support to the bandh and were in fact keen on not being left out. Trade unions were firmly with the farmers, showcasing the unity of farmers and workers once again. Various trader, merchant and transporter associations, student and youth organisations, women's organisations, taxi and auto unions, teachers' and lawyers' unions, journalists' unions, writers and artists and other progressive groups were firmly with the farmers of the country in this bandh. People were highly sympathetic to the cause of the annadaatas of India. Even while hundreds of volunteers were detained across the country, the bandh remained peaceful. The most remarkable aspect of the bandh was its scale and expanse. Reports of the bandh emerged from every state of India, and it reached farmers in far and distant places of India.”

The ongoing farmers' movement and the bandh call got support from Indian diaspora in various countries, along with farmers' organisations of other countries. During Prime Minister Narendra Modi's recent overseas trip to the USA, supporters of farmers organised protests in America, in Washington DC outside the White House. They held up placards that said, ‘We Support Farmers’, ‘No Farmers, No Food, No Future’, ‘Jai Jawan, Jai Kisan’, ‘Indian Government Suppressing Farmers’, and so on. Farmers' supporters turned up with flags even in so-called celebration events organised to mark the American trip of PM Modi. Protests were also held near the United Nations building in New York. There was a kisan car rally organised in Sacramento, California, to extend support to the protesting farmers. Protests were led by the Indian Workers Association of Great Britain in the United Kingdom, at London, Birmingham and Glasgow, in addition to a protest in Dublin, Ireland. There was a solidarity demonstration by the Indo-Canadian Workers Association at Surrey, and a solidarity walk in Toronto, both in Canada.

The countrywide role and initiative of the AIKS, CITU, AIAWU, AIDWA, DYFI and SFI in the campaign for, and execution of, the Bharat Bandh was impressive. The AIKS statement released on September 27, expressed its profound happiness and extended hearty congratulations to all sections of the people who made the Bharat Bandh called by the SKM a grand and historic success. Stating that the main slogan of the bandh was ‘Corporate Forces, Hands Off Agriculture, and Modi-Shah Quit Power’, the statement concluded by saying, “The political direction of today’s Bharat Bandh is that the last few years of joint struggles with the solid class character of worker-peasant unity now paves the way towards building a larger people’s united front against corporate exploitation especially in agriculture, industry and services. Those political parties who stand for protecting the corporate interests will face the people’s ire and will be pushed back in the face of the emergence of this movement of people’s resistance.”

Just before the Bharat Bandh, came the horrific news of the police of the BJP’s Assam government gunning down two Muslim farmers, one of whom was a 12 year old boy. The AIKS held an immediate press conference in Delhi on September 25, condemning the killings. It  expressed shock and anger at the manner in which brute force has been used to forcibly evict thousands of poor peasants in the Dholpur-Gorukhuti area of Sipajhar in Darrang district of Assam. The eviction drive took place even as a case was pending with the Gauhati High Court on the matter, without even giving enough notice to the people. AIKS demanded dismissal of the authorities responsible for the killing and resignation of the Assam chief minister Himanta Biswa Sarma holding the home affairs portfolio, who is directly responsible for encouraging such action. It also demanded judicial enquiry by a sitting Judge of the High Court into the incidents.

AIKS noted that the entire eviction drive in the name of ‘illegal migrants’ is with an ulterior motive of communally polarising the state by pitting communities against one another. After the Haryana BJP government brutally killed a farmer Sushil Kajal, now the Assam BJP government has also followed suit by shooting down two farmers with a sinister agenda of pitting communities against one another.

AIKS demanded a compensation of Rs 25 lakh and job to families of the deceased as well as Rs 5 lakh for the seriously injured. It called upon all its units to protest against the targeting of Muslim peasants and unleashing of brutal violence on them. It demanded immediate halt to the eviction drive and proper rehabilitation and resettlement for the affected families.

The SKM also released a similar statement of condemnation. The AIKS and AIAWU will soon be sending their joint central and state team to Assam to visit the families of the martyrs.

On September 28, the day after the historic Bharat Bandh, as per the SKM call, farmers from across the nation observed Shaheed Bhagat Singh Jayanti. Remembrance programmes were held at all SKM morchas and protest sites where youth and students came together in large numbers, and remembered the great son of India who laid down his life in a supreme sacrifice for the values of freedom, democracy, secularism and socialism. Shaheed Bhagat Singh's sacrifice will always inspire the farmers and the people of India in their fight against injustice.