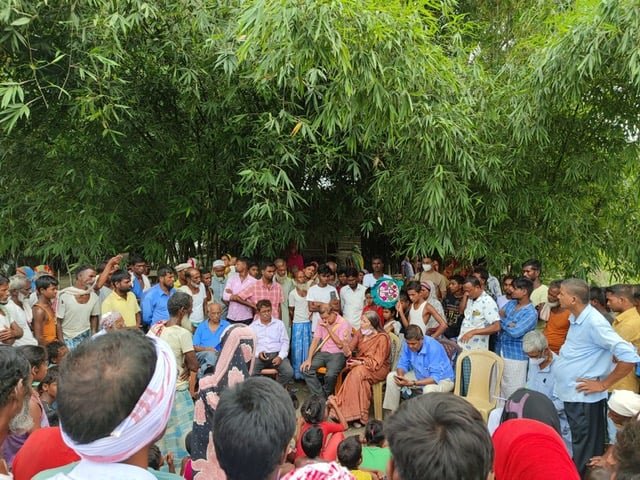 THE Assam government led by the BJP, which has been dehumanising the religious minority community members of East Bengal origin by calling them "termites", is now evicting them from their homes to give the land away for farming to 'indigenous' people. Ironically, the controversial phrase 'indigenous of Assam' is yet to be defined by any constitutional bodies or authorities.

The ruthless eviction drive on September 23 led to the killing of two poor Muslims and injuries to many others by the police under Chief Minister Himanta Biswa Sarma. Many of these attacks are now targeted at driving the toiling Muslims peasants out of their livelihood and dwelling places. Thousands of internally displaced families are being branded as 'suspected' or 'doubtful' citizens through orchestrated campaigns and hate machines of the RSS-BJP and their sister outfits as well as the state administration. In fact, those families who have been victims of recurring floods and erosions in Assam and displaced, time and again, from one place to another and settled in riverine areas or sand bars are being dubbed as 'illegal encroachers' and evicted with impunity and acts of barbarian savagery.

The violence that marked the eviction drive against the poor Muslim peasants of Dholpur village under Sipajhar Revenue Circle of Darrang district on September 20 and September 23 is not unfamiliar to Assam. But what the most recent incident, on September 23, reflects is the dehumanisation and otherisation of the poor Muslim peasants who had settled in the riverine areas of Dholpur for more than five decades or so after being rendered homeless and uprooted from their original villages within Assam due to the ravages caused by floods and erosions. These internally displaced persons are being blamed as 'outsiders' or 'suspected citizens' and charged with 'encroachment of government lands'. The kicks and blows of a camera man hired by the local administration as he assaulted a grievously wounded person felled by a bullet fired by the Assam police at point-blank range epitomised the nature of brutality. The major concern is, though, the communally designed and ruthlessly executed eviction drive of the government of Assam. Hundreds of residents in Dholpur have been rendered homeless by the latest eviction drive – the second in three months. The drive was carried out while the state government still has multiple pandemic-related restrictions in place.

CPI(M) Polit Bureau member Brinda Karat visited the families of  those killed and injured on September 29, along with state Party leaders. The CPI(M) in Assam has been organising protest demonstrations across the state against the eviction drives without alternative rehabilitations. Almost all the opposition parties, including the Congress, have condemned the inhuman evictions without alternative arrangements for the poor families. The CPI(M) demands immediate halt to all evictions without alternative and prior rehabilitation packages, a judicial inquiry under a sitting judge of the Gauhati High Court into the brutal eviction drive, and adequate compensation to those killed and injured.

BOGEY OF ‘SUSPECTED’
CITIZENS
Successive governments in Assam had undertaken development activities in these villages and provided facilities such as electricity connection, fair price shops, banks and schools, before the current government came down ruthlessly on them. The evicted people of No.1, 2 and 3 Dholpur villages under Sipajhar Circle are baffled, given that the government had legitimised their settlements by implementing several development projects over decades. Notwithstanding the cacophonous campaigns against the evicted families as 'illegal migrants', 'suspected foreigners', 'Bangladeshis', etc., none of these evicted families could be identified as illegal migrants through judicial scrutiny till date. Furthermore, the names of almost all the people of the area appear in the updated National Register of Citizens (NRC) which was prepared under strict supervision of the Supreme Court of India. In fact, these people had to undergo the strictest scrutiny and had horrifying experiences for inclusion of their names in the register during the NRC upgrading process.

The district administration carried out the first eviction drive on June 7. It is reported that 49 Muslim families and one Hindu family had been uprooted in the drive and reportedly cleared 120 bighas of land (one bigha is around 900 square yards), purportedly belonging to a 'pre-historic' Shiva temple. Chief Minister Sarma and his cohorts claim that the temple was constructed 5,000 years ago, while the people living in the surrounding areas say it was built only in the early 1980s. The September 20 drive, however, was a much larger exercise. Some residents said the number of evicted families was more than 900, which would take the count of affected people to several thousand. According to the villagers, the local administration engaged more than 1,200 police personnel and jawans from the Assam Police’s 14th battalion to carry out the drive at Dholpur No.1 and No. 3 villages. The drive was carried out by the Darrang administration and led by the chairman of the proposed Gorukhuti multi-purpose agricultural project. At the same time, the district administration used 22 tractors to plough the cleared, cultivable land right after the eviction.

In the second week of June, soon after the first drive, Sarma’s cabinet approved the formation of a committee with MLA Padma Hazarika as the chairman. The purpose of this committee was to “utilise 77,000 bighas of government land, freed from encroachers at Gorukhuti, Sipajhar in Darrang, for agricultural purposes,” which triggered the September 20 eviction drive. The chairman of the proposed project, Padma Hazarika, has also been elevated to the rank of a cabinet minister. The committee also includes BJP MP and the party’s national general secretary Dilip Saikia and party MLAs Mrinal Saikia and Paramananda Rajbongshi.

The chief minister had announced the 'Project Gorukhuti' after the eviction drive in the first week of June. "The land belonging to the indigenous people has been encroached upon on a large-scale with a well-designed conspiracy by a group of well-organised encroachers who have always been posing a threat to the identity and existence of the indigenous people,” the government said.

What is interesting is the fact that although the state government has continuously been campaigning for starting an agricultural project after freeing 77,420 bighas of government land from 'illegal encroachers', it is crystal clear that there is no such huge area of land. In reply to pointed questions by lone CPI(M) MLA Manoranjan Talukdar, the revenue minister stated in the recently concluded Assam assembly session that no survey was done in the Dholpur-Fuhuratoli area under Sipajhar Revenue Circle and that around 37,000 bighas of land was already submerged and engulfed by the mighty river Brahmaputra. Out of approximately 25,929 bighas of land, only 16,878 bighas are suitable for agriculture, the minister stated in a written reply placed on the floor of the assembly.

EVICTION DRIVES &
POLITICS OF POLARISATION
After coming to power for the first time in Assam in 2016, the BJP government headed by Sarbananda Sonowal had stepped up the campaign against so-called 'suspected Bangladeshi nationals' and started the drive for eviction of poor landless people in different parts of the state under the cover of 'illegal encroachment' and on the plea of freeing the government land from occupation by so called 'doubtful citizens'. However, the main targets of eviction were the people belonging to the religious minority communities of erstwhile East Bengal origin. They came from the districts of Barpeta, Kamrup, Dhubri, Goalpara, Darrang, etc in search of their livelihood after being ravaged by floods and erosions.

In fact, certain RSS-backed organisations, along with chauvinistic forces, have constantly been raising the demands to free government lands from 'suspected Bangladeshis' and distribute the same to the local 'indigenous' people of Assam. The Sonowal government, much to the glee of 'Hindutva' brigades, had evicted several thousand people from PGRs (professional grazing reserves), VGRs (village grazing reserves) or from government lands. In some places like Boko in Kamrup district, Chauldhuwa Ghat in Lakhimpur district, Dodhia in Dibrugarh district, Laika in Tinsukia district, Gohpur in Sonitpur district, etc, the local landless tribals and non-tribals were also not spared and they were mercilessly evicted from their hearth and home. All these people are yet to be rehabilitated. In one such eviction drive near Kaziranga National Park, two people, including a woman, died in police firing as the settlers mounted stiff resistance.

After the BJP formed its government for a second successive term, now headed by Himanta Biswa Sarma, communal polarisation in the state has sharpened. Within a week of assuming power, the Sarma dispensation evicted 25 religious minority families at Jamugurihat in Sonitpur district. Subsequently, the state administration had resorted to inhuman eviction drive in the districts of Chirang, Udalguri, Karimganj and Hojai. Barring the district of Chirang, in most parts of the state, the evictions were communally motivated. However, non-Muslim poor peasants and local tribals were also not spared in some places either for vested interests or to serve the interest of big businesses.

With not much to show off its achievements in the last more than six years in office and the memories of Covid-19 losses and hardships still fresh, the BJP is left with no choice but to escalate its campaign of hate. The Islamophobic campaign for protecting the supposedly endangered majority is the only agenda of the present dispensation in Assam. Atrocious hate crimes and speeches by these fundamentalist groups offer a daily reminder to the Muslims that they can at best hope to be second-class citizens.
The Left and secular forces are determined to maintain peace, amity and communal harmony in Assam and to ensure all the constitutional rights to all the citizens cutting across religious, linguistic and ethnic barriers.