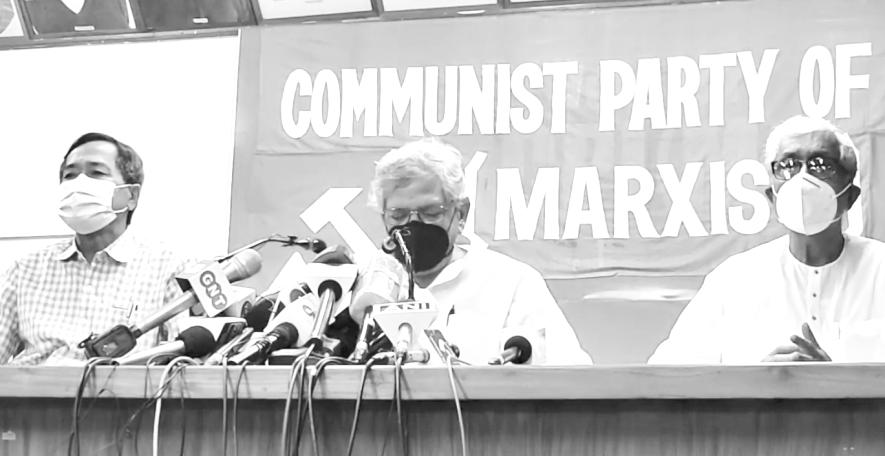 Stop the Attacks and Violence in Tripura

Below we publish the text of the press note released at the press conference held by CPI(M) general secretary Sitaram Yechury and Polit Bureau member, Manik Sarkar at CPI(M) headquarters, AKG Bhavan in New Delhi, on September 14.

THE BJP in Tripura backed by the state government has unleashed a reign of terror and intimidation against all activities of the opposition in Tripura focusing their anger and frustration against the CPI(M) and the Left Front. It has also attacked media houses who report the truth. It is as though the Constitution of India, the democratic rights guaranteed to the people by the constitution and the norms of functioning in a parliamentary democracy have all been suspended in Tripura under the leadership of the BJP government. It is deplorable that the chief minister himself has made the most provocative statements, threats and outright lies justifying the attacks against the CPI(M). From 2018 when the BJP assumed power, to the present, 21 supporters and members of the CPI(M) including a woman have been killed.

In many of the attacks on September 7 and 8, by BJP mobs, shouting Jai Shri Ram and armed with iron rods and petrol bombs, the police were either bystanders or refused to respond to calls regarding the attacks on homes and Party offices. Some BJP leaders and ministers have also made provocative statements encouraging the attacks.

On September 7 and 8, 44 Party offices (42 of the CPI(M), 1 RSP and 1 CPI(ML)) have been attacked, burnt, party property destroyed. In an unprecedented display of criminality, the state office of the CPI(M) in Agartala was attacked, sought to be burnt, mobs entered the premises and vandalised the bust of veteran tribal leader and former chief minister Dasarath Deb. The CRPF guards deployed at the office were mysteriously withdrawn an hour before the mob attack. 67 houses and shops of CPI(M) supporters have been burnt or looted. Scores of supporters have been physically attacked of whom at least ten required immediate hospitalisation. Patronage is provided to the attackers while the police are filing false cases and making arrests of CPI(M) supporters.

It is symbolic of the brazen nature of the attacks under state patronage that the leader of the opposition and four-time chief minister of Tripura Manik Sarkar was prevented and blockaded by the police from visiting his own constituency on September 6. The modus operandi to prevent the leader of the opposition (LOP) from fulfilling his constitutional duty is to gather a few persons from the ruling party to oppose his programme and provide a pretext to stop it. On September 6, while Manik Sarkar was going to attend mass deputation to the BDO of Kathalia Block largely falling under his constituency, the police refused and put up barricades to stop him. He called their bluff and insisted on his right to visit his constituency where hundreds of people were waiting for him. Earlier, on another occasion, the police remained bystanders when the car he was travelling along with other MLAs and Party leaders to Shanti Bazar was physically attacked. Obviously the administration and police were being given instructions by their bosses in government.

While the media has widely reported the attacks on CPI(M) offices and supporters including the state committee office, it is significant that the country’s prime minister and home minister are silent. It is an indication of the central support of the Tripura government that details of the attacks on the CPI(M) sent to the prime minister by the CPI(M) general secretary Sitaram Yechury have not even been acknowledged. This is in sharp and stark contrast to the attitude of the centre when they receive complaints, often manufactured, from BJP leaders in opposition ruled states.

These are the latest phase of attacks which started on the morrow of the victory of the BJP in the state assembly elections in 2018. Since March 2018 to June 2021, 662 Party offices, 204 offices of Left mass organisations, 3,363 houses of CPI(M) members and supporters, 659 shops have either been gutted, ransacked or looted and 1,500 livelihood centres such as fish ponds, rubber trees and so on have been destroyed. Barbaric crimes against women are increasing in a shameless manner. False cases are being imposed in a bid to intimidate and silence CPI(M) leaders.

The attacks have increased and intensified because of the growing discontent of the people against the state government. Three years after it came to power, the BJP government has utterly failed to fulfill its promises. On the contrary it has destroyed and reversed the welfare schemes for all sections of people and also the pro-tribal policies of the Left front government. Today in Tripura there are starvation deaths, hunger has grown, joblessness has increased, criminals are given a license, RSS is busy trying to sow the seeds of hatred and division. When media reflects the reality they are being attacked. More than 30 media persons have been physically attacked. In this phase, four media houses critical of the BJP government were attacked. The increasing participation of people under the banner of the CPI(M) and the Left in Tripura has made the BJP desperate.

This attack on the opposition and particularly the Left in Tripura and the attack on the independent media is also part of the growing intolerance and all-out assault on democracy that is happening all over India. This all-out attack on democracy must be condemned by all democratic minded people and political parties.

The CPI(M) demands that the attacks and violence against the CPI(M), Left and all opposition parties should stop; attacks on media should stop and they should be allowed to function freely; the miscreants responsible must be arrested and prosecuted; compensation must be given to those whose homes, shops and other property was destroyed; false cases against opposition party leaders and workers should be withdrawn.