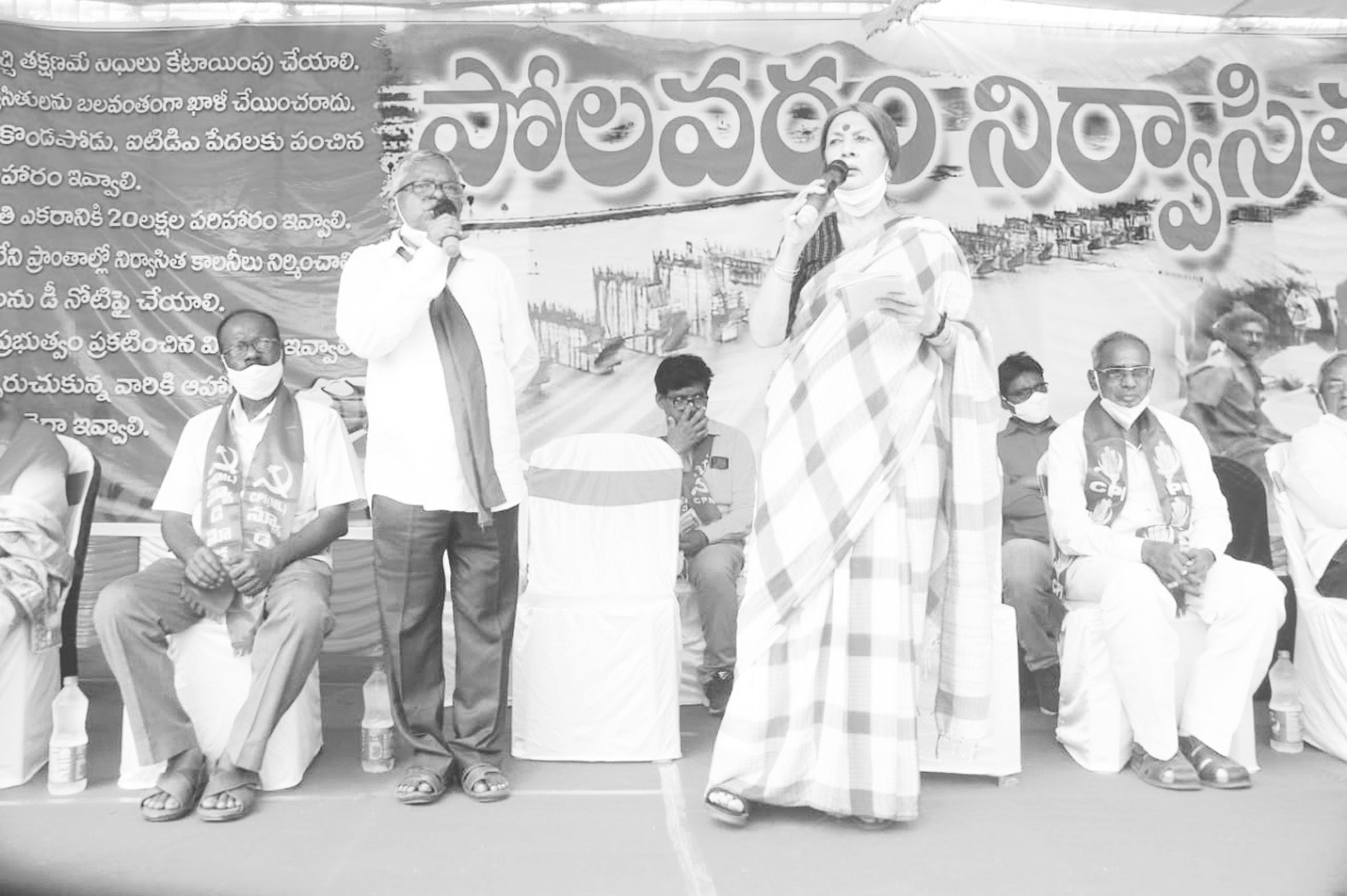 AP: ‘Save Nation’ Campaign Demands a Halt to Selling India to Corporates

THE ‘Save Nation’ campaign began in Andhra Pradesh at a public meeting in Visakhapatnam on September 16. Inaugurating the campaign, Brinda Karat, CPI(M) Polit Bureau member said that the historic agitation of the workers of the Visakhapatnam Steel Plant (VSP) is symbolic of the struggle of the people of India to defend the nation’s self-reliance by saving national assets like the public sector.

Recalling the statements of Prime Minister Narendra Modi on ‘self-reliance’ and ‘Make in India’, she likened the policies of the centre to “termites eating into the core values of the constitution.” She also said that the Covid-19 pandemic, which has caused the greatest humanitarian crisis in history, has also shown how socialist and capitalist nations handle public health crises differently.

On the next day, Brinda Karat, accompanied by CPI(M) state secretary, P Madhu, led a rally from Chintoor to Rekhapalli, the 30-km stretch of the submerged area of the Polavaram irrigation project in East Godavari district, in support of the displaced people.
Addressing the rally, she said that the central government has waged an undeclared war against adivasis, treating them as ‘second class citizens’ by depriving them of their right to live in the forest dwellings.
She proceeded to Chintoor district and in the town meeting, she said that depriving the right to access to all the entitlements of the Resettlement and Rehabilitation  (R&R) package of the Polavaram irrigation project was a criminal act by the centre, as the project was accorded national status.

The tribal people and gram sabhas had not been consulted on the resettlement issues from the beginning of the project, she said. This was a sign that the centre was treating the tribal people as ‘second class citizens’, she said.
The rally passed along the Sabari river belt, covering Mallethota and Sunnamvarigudem villages, where Brinda Karat inspected the tribal habitations and fertile land that face the threat of submersion. At the public meeting in Rekhapalli village, Brinda said the gram sabhas of the tribal panchayats were not given a voice to share their problems in designing the resettlement plan. A whopping 376 habitations were being affected in the Chintoor agency alone, she noted.
The fight for the rights of the affected people would be the fight of all the adivasis of the country, she said. On the state government's role in R&R, she questioned the silence of Chief Minister YS Jagan Mohan Reddy. She said that above 70 per cent of the people affected by the Polavaram project were adivasis.

On September 18, Brinda Karat participated in the “Save Nation” campaign in Tirupati. She said that Prime minister Narendra Modi’s monetisation policy would spell doom for India and it is high time that all political parties, public and social groups with progressive ideologies wage a united battle against the anti-poor policies of the NDA government.

She said that the NDA government, in the name of monetisation, is selling key assets of the country, endangering the future of the employees working in the public sector. “Even villages are brought under the onslaught of Modi’s privatisation move, selling away country’s landed properties to corporate groups,” she said.

Brinda Karat said it was inhuman of Narendra Modi to hoard  Covid-19 vaccine stocks for a week and use them for bulk vaccination on his birthday for political advantage. She said that farmers and industrial workers were the worst hit due to the failed economic policies of the NDA government. “Though the farmers’ federations have been hitting the streets in New Delhi for a year now, their plight continues to worsen. The privatisation policies have adversely impacted the lives of industrial workers,” she said.

Lashing out at the centre for failing to implement the assurances given in the Andhra Pradesh State Reorganisation Act, 2014, such as granting special category status, Brinda Karat also found fault with the chief minister for failing to question the centre on it.

Noting that the Modi government proposed to monetise Tirupati airport and to hand it over to Adani soon, she recalled the LDF government of Kerala opposing the privatisation of Thiruvananthapuram airport. She questioned why the YSRCP government is not opposing the privatisation move. She called upon all the like-minded political parties and trade unions to extend their support to the ‘Bharat Bandh’ on September 27 called by farmers’ unions.