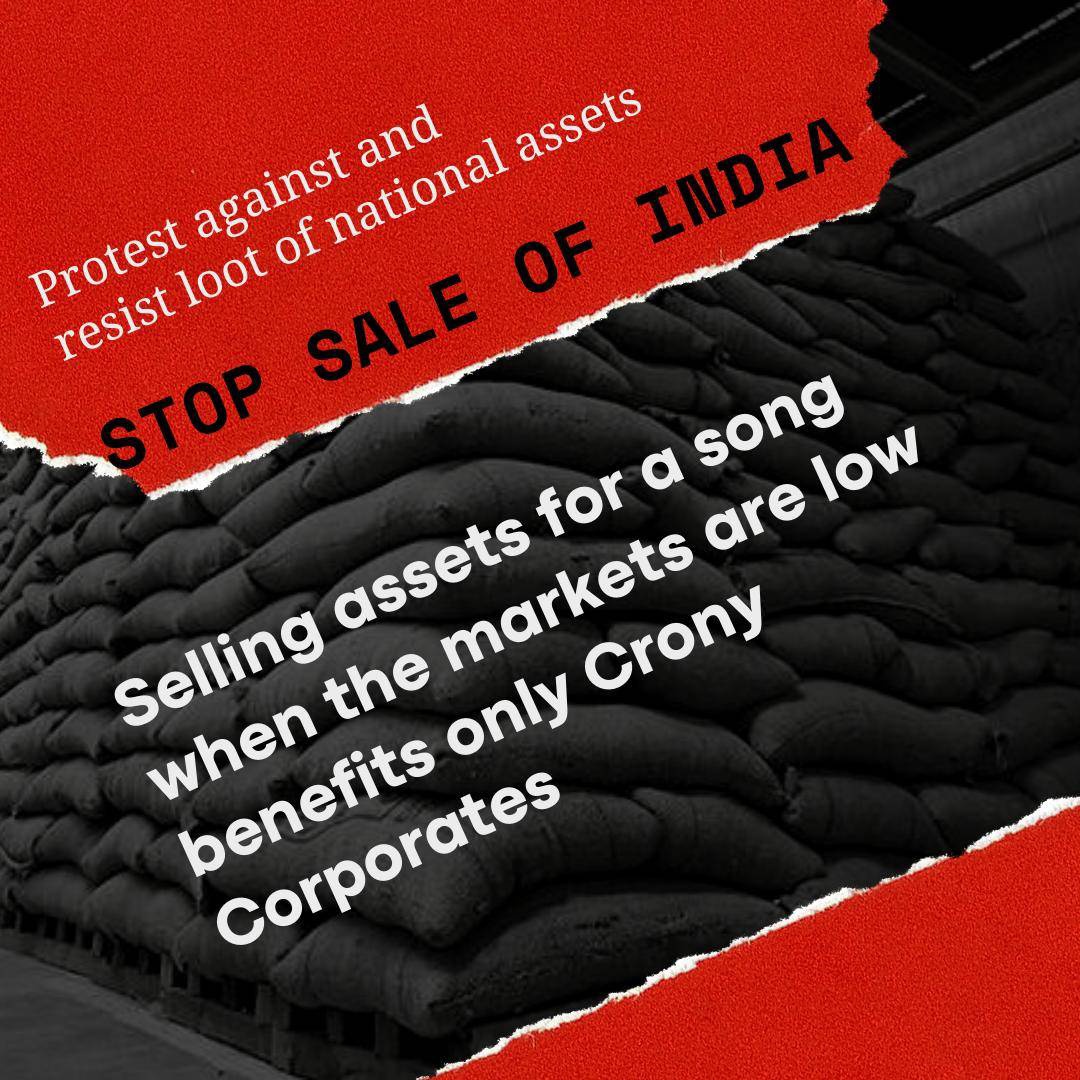 Halt this Sell Out!

CAMOUFLAGED in jargon that speaks of ‘monetisation of de-risked assets’, the BJP-led NDA government has announced its plan to sell out India’s public sector. In that plan, assets ranging from roads, ports, airports and railway track and stations, through fuel pipelines, telecom towers, optical fibre cabling, warehouses, and stadia, are to be handed over to big private investors in return for upfront or staggered payments of around Rs 6 lakh crore over a four year period ending financial year 2025. That sum,the government promises, would be used to create new infrastructural facilities.

This is not privatisation argues the finance minister, but only a temporary transfer of rights to revenue streams from existing and functional public sector projects in the infrastructural area to private investors for specified periods of time. Ownership remains with the government, but user rights and revenues would be farmed out to investors for a fee.

There are four issues that are conveniently side-stepped here. The first is that, since the plan is to ‘unlock the value of idle assets’ in the hands of the government, when once-monetised assets return to the government they would be sent back to market for further rounds of monetisation. Government may think itself owner, but it would never manage these assets and provide the services they deliver. It would merely be encashing the presumed value of those assets, which if past experience is an indicator would be kept low to attract investors. And since expected upfront payments have been announced before the bidding starts, the actual sale prices are unlikely to be very much higher.

The second, is that the private sector would need a guarantee that during the period it holds, manages and operates infrastructural assets, receipts from the sale of services would be adequate to recoup its investment as well as earn a return which is lucrative enough to attract that investment in the first place. Even if the government is still owner, pricing would have to be commercial and returns attractive. This can be a problem. In areas that can indeed yield a positive net revenue stream, it may not match private sector expectations requiring either higher user charges for consumers or transfers from the government to fund the gap. In instances where the revenue stream is non-existent or limited, the government’s contribution will have to be substantial. A process that is to help mobilise resources for the government can suck in large sums.

The third is that the private sector would demand freedom to reduce costs to ensure adequate returns. Among those costs would be labour costs, reduction of which can involve wage cuts, retrenchment or both. The role that the public sector has played as a standard setter for organised labour markets is likely to be undermined.

Finally, there is little clarity on how the government would ensure that private managers of assets would provide services of acceptable quality. Putting in place a regulatory regime for the purpose can be costly and time consuming, leading to neglect and a decline in the quality of more expensive services.

In sum monetisation, while justified as a process through which resources for investment in greenfield infrastructure projects is to be mobilised, is nothing but a scheme to expand the terrain of operation of big business, so that the latter can earn high returns either at the expense of the consumer or the State exchequer. It is a scheme to engineer a transfer of income and wealth to those at the apex of the wealth pyramid.

Shockingly, this scandalous scheme of mortgaging public wealth to fatten the bottom line of chosen business houses would not contribute significantly to the creation of new assets. The government claims that Rs 111 lakh crore will be invested over five years in projects included in the so-called National Infrastructure Pipeline. The Rs 6 lakh crore to be realised from asset monetisation is only about five per cent of that. The Modi government is justifying handing over wealth created with public money over decades to big business to get itself five per cent of the planned investment in infrastructure over the coming five years. This is nothing but a scam parading as a plan.