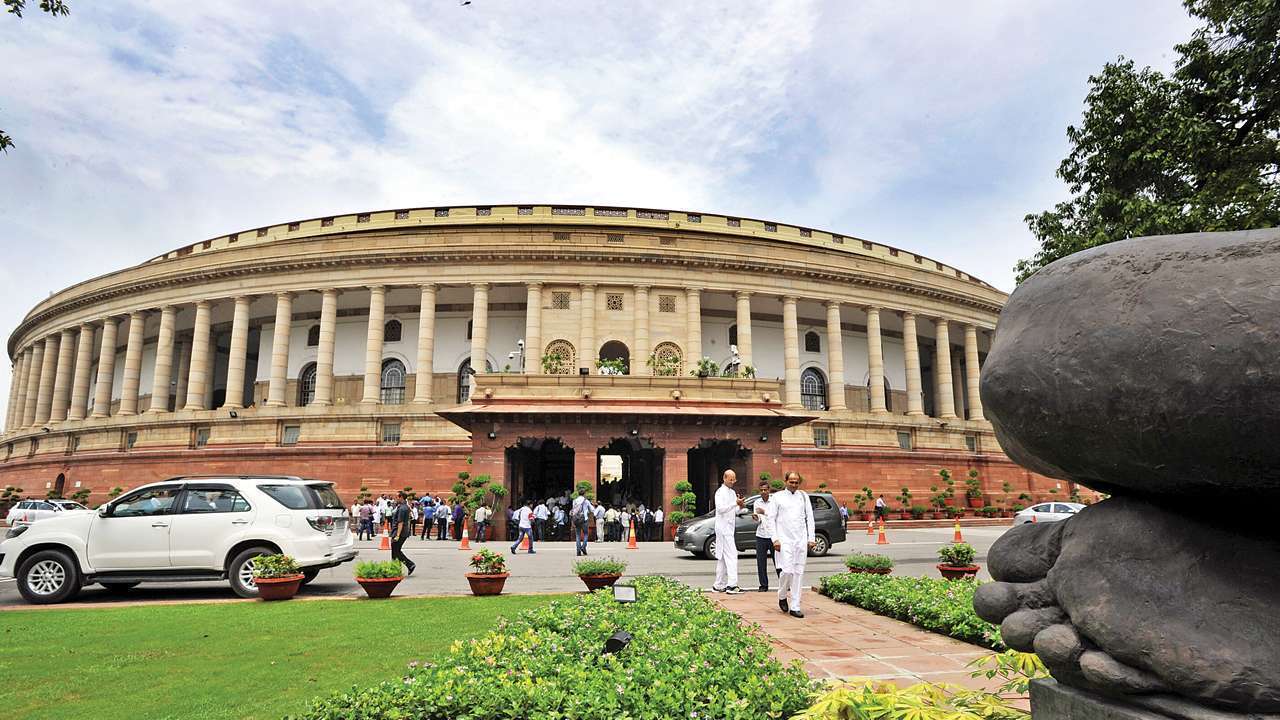 Monsoon Session of Parliament: A Blatant Assault on Democracy

MONSOON session of the Parliament that concluded on August 12, 2021, revealed the undemocratic and anti-constitutional face of the BJP government. It revealed the levels of intolerance this government has towards the parliamentary proceedings and debates, which are the basic building blocks of Indian democracy. At least 20 bills were passed without discussion and voting. New anti-people legislations were bulldozed on a daily basis and were passed without discussion by suppressing the voice of dissent. This monsoon session was also a litmus test for the united movement of the entire opposition, a hope, the nation has against this fascistic regime. The issue-based unity among opposition parties came out in a way never seen before in the Parliament and has increased the confidence of people who still haven't lost faith in democracy and the Constitution.

As the government released the list of legislative business it intended to take up in this monsoon session, the opposition parties took a stand that the key Bills, which may have a long-standing impact on the economy and people, should go through parliamentary panel scrutiny before being passed. We had jointly informed the government of our stand at the first Business Advisory Committee (BAC) meeting itself. Bills such as the Electricity Amendment Bill, Essential Defence Services Bill, Insolvency and Bankruptcy Code, and General Insurance Amendment Bill, were among those legislations which the opposition wanted to be referred to select committees for wider consultation and scrutiny. Also, we were raising the issues of protesting farmers, fuel price rise, Covid and unemployment and the Pegasus snooping to be discussed in Parliament. But the government outrightly rejected the demands of the opposition for discussing these key issues on the floor of the House.

In the first BAC meeting, when the opposition parties demanded referring key bills to standing or select committees, and to have a discussion on the three important issues in the House, the Rajya Sabha chairman advised that the government should have a discussion with the opposition to create a consensus. But no such consultation or discussions were convened by the government. Rajya Sabha’s leader of the House and parliamentary affairs ministers’ were meeting the floor leaders individually, though the chairman's direction was to hold a formal meeting with everyone. During the course of this informal individual dialogue, we stood firm on our stand along with other opposition parties to protect the people's interests. In both the Houses, the opposition tried to raise these issues every day but the chair denied permission to do so. No motions for adjournment or suspension of business were admitted by the chair in either Lok Sabha or Rajya Sabha. Seldom seen, but it happened that even the mic of the leader of the opposition in Rajya Sabha was switched off while he was speaking on the farmers' issue and Pegasus snooping.

The BJP, with its brute majority in Lok Sabha, got all the Bills passed within minutes in the midst of the opposition's protest. But they found it a little difficult to suppress our voices in the Rajya Sabha. Here they adopted a strategy of blaming the opposition for disruptions and not allowing them to consider important legislations. Written statements against the opposition were being read out every day by the chairman and deputy chairman only to tarnish us and to pass a message to the public that the opposition is not allowing the temple of democracy to function. But our questions to the government still remain unanswered.

The way the chairman and deputy chairman acted during this session is an all-time shame for our parliamentary democracy. They behaved like a mere facilitator to support the government for doing anything they wanted. This was evident since the first day. When the Rajya Sabha started taking up Bills, even though we had decided not to participate in the debates or cooperate for the smooth functioning of the House, the opposition MPs decided to speak on a Bill as an opportunity to raise the issues they were otherwise not being allowed to discuss. But if we said a single word on any subject that the government did not want to be raised, our mics were turned off by the chair.

It is the basic right of a lawmaker to ask for voting after the conclusion of the discussion on a Bill. The convention is that even if a single member asks for division, the House should accept it. But all these conventions were derailed and the chair justified it by saying that he cannot entertain voting, as the House is not in order. But the same chairman was silent on how the House can pass a bill when it is not in order? Also, there was a well-planned programme by the government to avoid media inside the Parliament House in the name of restrictions imposed on Covid. Very few media persons were allowed to enter the building and see the proceedings. The Rajya Sabha TV was also functioning in a partisan manner. It was switched off many times to hide how brutally our democracy is being butchered by the BJP inside Parliament.

Even during this ruckus, the opposition decided to cooperate with the government for passing the Constitutional Amendment Bill on the OBC reservation as well as for the discussion on the Covid situation in the country. After the discussion on the OBC reservation bill got over and the same got unanimously passed on August 11, at 6 pm. The usual working time of Rajya Sabha is till 6 pm. If the government wants to transact business beyond that the Chairman should give permission after taking the sense of the House. But nothing in that regard was done and the government unilaterally proceeded with taking up the General Insurance Amendment Bill to privatise the general insurance sector in our country. There was a unified opinion among the majority of political parties to send this bill to a select committee before passing. When the deputy chairman convened a meeting of the floor leaders of Rajya Sabha, the opposition as well as the other parties, who usually take a stand supporting the government, such as the YSRCP and BJD, were demanding this. The finance minister was called in by the deputy chairman to the meeting and all of us together apprised her regarding the wider consensus and demands we raised on the insurance bill. Even after all this, the government, without any hesitation proceeded unilaterally to pass this Bill. This undemocratic decision of the government led to all the incidents that happened on August 11.

On August 11, the entire opposition assembled in the well of the house and protested against the Insurance Bill. The House was adjourned for some time and reassembled with a heavy deployment of security personnel. Three-layer protection was formed in front of the chairman's seat to prevent opposition MPs protest. They manhandled all of the protesting MPs. The security personnel (marshals) physically attacked me and other opposition MPs while we were trying to approach the chairman's chamber. On that day also the chair denied the rights of members for asking division and voting. The heavy deployment of marshals and security personnel at that time to manhandle the opposition MPs created all the chaos. This advance deployment of marshals in huge numbers makes it clear that it was a well-planned action intended to harm the protesting MPs. Such incidents have never happened in the history of the Indian Parliament. Any protests or tussles in the House were amicably resolved by the ruling and opposition parties through mutual consultation and dialogue. This used to be the beauty of our parliamentary democracy. It is the first time that the security personnel were deployed only to physically assault the opposition MPs, including women. Many doubt that those who were there in the chamber wearing security marshal uniforms were specially brought in from outside for manhandling the opposition MPs.

In order to portray these events in a distorted way, the government released a very small portion of the inside visuals of the day. This is intended only to mislead the public and deliberately tarnish the opposition. Also, fake complaints were filed against some MPs, including me, by the security personnel alleging that we physically attacked them. Even though MPs from all opposition parties were there at the forefront of the agitations, the government is trying to categorically attack the Left parties by propagating that the Left MPs are responsible for this ruckus in Rajya Sabha.

There are also attempts intended to intimidate the CPI(M) as we played a major role in Rajya Sabha for unifying the entire opposition for taking up people's issues. A joint rally of opposition MPs was conducted on July 27th from Parliament to Vijay Chowk raising the Pegasus issue. Leaders of the opposition parties in Rajya Sabha addressed the media and explained the manner in which the House is functioning. Opposition MPs of Lok Sabha and Rajya Sabha together went to the Kisan Sansad held by protesting farmers at Jantar Mantar on  August 2. Opposition together announced its solidarity towards their demands and it got very wide publicity. On August 12, a day after the monsoon session concluded, the opposition MPs conducted a protest and marched towards Vijay Chowk from Parliament. On the same day, Floor leaders of Rajya Sabha also met the chairman and submitted a memorandum condemning the way the Monsoon Session was conducted by ignoring the opposition's demands. It is sure that the active role taken by CPI(M) in all these issues has provoked the BJP and it resulted in filing these fake cases. All these exercises were done to cover up the ugly undemocratic face of this authoritarian government. But it is certain that this government cannot escape from the people's anger. Whatever happened during this Monsoon Session will have fatal consequences for the Modi regime.

On August 13th, I have written to the secretary-general of the Rajya Sabha seeking a probe and necessary actions on the incidents of physically assaulting and attacking the opposition MPs including me, inside the Rajya Sabha chamber, on August 11, 2021. I have asked him to take stringent action against the security staff, who have physically assaulted the opposition MPs and to investigate in detail whether any outsiders had infiltrated among the security staff.