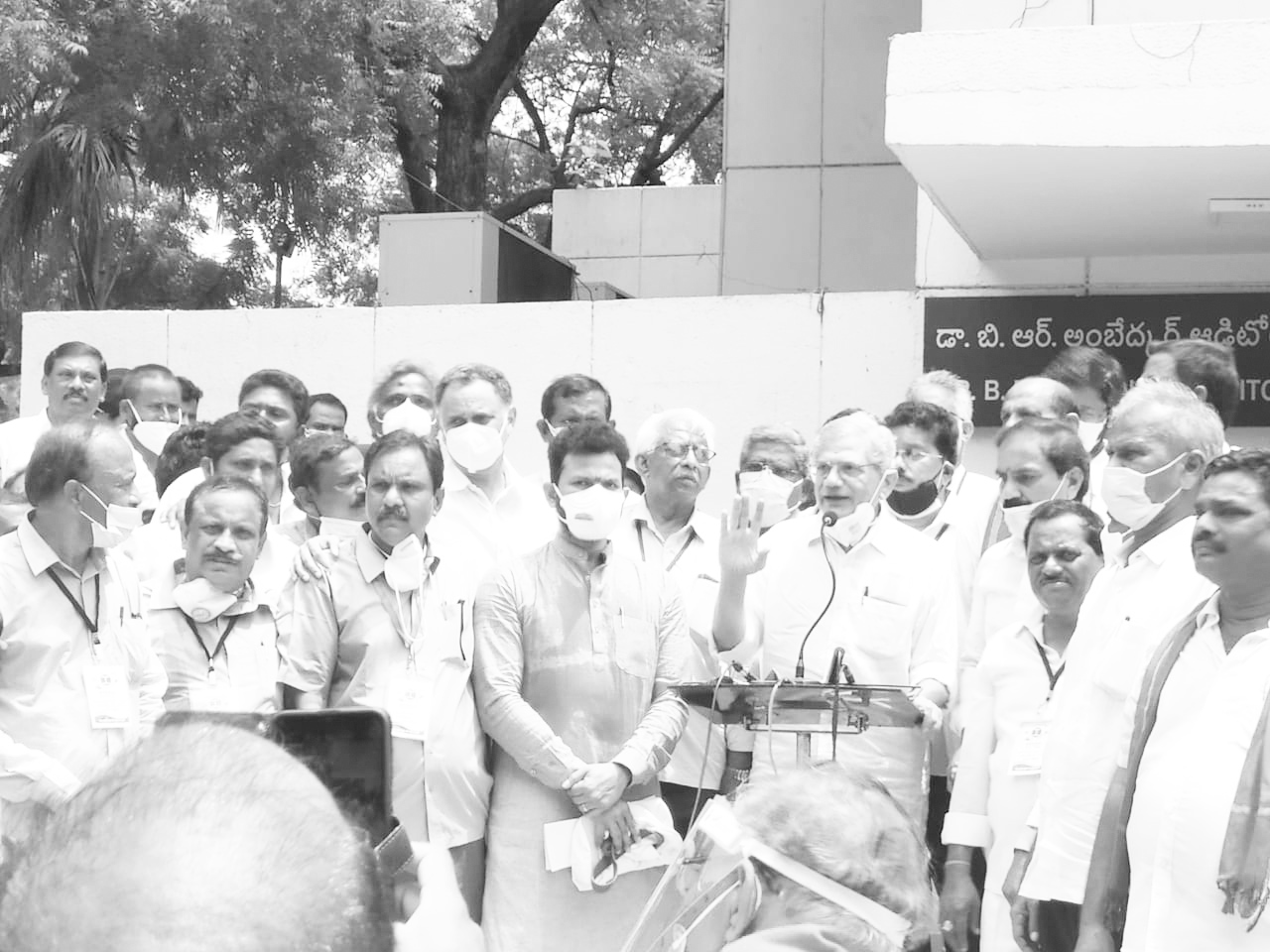 Dharna in Delhi against Sale of Vizag Steel

THE Visakhapatnam Steel Plant workers organised a two-day maha dharna on August 2-3 in New Delhi against the 100 per cent strategic sale of  Vizag Steel (RINL). The workers held the dharna successfully overcoming  all the hurdles created by the BJP government which used police force in the capital city to thwart the protest.

The Vizag Steel Protection Committee expressed its gratitude to all the political parties and trade unions which supported their cause and took part in the maha dharna. The workers had obtained permission from the Delhi police to organise the dharna despite which the BJP government had used the police force to stop the workers at railway stations for hours together, to force and caution all hotel managements not to allot any rooms or cancel all the rooms if already booked for the workers who reach Delhi.
The steel workers said the police collected their ID cards and phone numbers and called them and threatened them not to participate in the dharna. They also intensified surveillance around hotels and at Jantar Mantar to intimidate the workers.
Despite the threats, a thousand workers reached Jantar Mantar from different routes and assembled and informed the police that they will continue their struggle against privatisation of Visakhapatnam Steel Plant even if they were arrested. The police had to step down when the national trade union leaders intervened and advocated on behalf of the workers.

The maha dharna continued even as it rained heavily on the first day and several trade union leaders and parliament members met the workers and expressed their solidarity. They reiterated that the government is only the custodian of public assets and it doesn’t have any right to sell away public assets. They also said that if the BJP government continues to attempt to sell the Steel Plant, the people of the country will make sure they change the custodian.

CPI(M) general secretary Sitaram Yechury, in his address to the workers, remembered the 32 martyrs who lost their lives in 1966 in their fight to establish the steel plant in Vizag. He recalled that 53 communist MLAs resigned during that struggle. He also warned that if the BJP government fails to withdraw the decision of strategic sale of  Vizag Steel Plant, it will have to encounter a big mass movement. Elamaram Kareem, CPI(M) leader of Rajya Sabha, said that the  Kerala government had taken over the shares of  Hindustan News Print Ltd when it faced crisis and also appealed to the Vizag Steel workers to put up a tough fight as it is a do or die situation for them.
Among the others who extended their support to the steel workers are B V Raghavulu, CPI(M) Polit Bureau member, Vijay Sai Reddy, YSRCP parliamentary party leader, Visakhapatnam MP, MVV Satyanarayana (YSRCP), Satyavati, MP from  Anakapalli constituency and several other YSRCP MPs, K Rammohan Naidu, MP from Telugu Desam Party, Elamaram Kareem with seven Left parties MPs, Narayana, CPI national leader,                     P Madhu, CPI(M) and Ramakrishna, CPI state secretaries of Andhra Pradesh, Hanumantha Rao from Congress and leaders from AAP and RLD participated. Central Trade Union leaders – Tapan Sen, general secretary of CITU, Amarjit Kaur, general secretary of AITUC, S Punyavati from AIDWA, Vijoo Krishnan from AIKS and Aishe Ghosh from SFI took part in the dharna.

The Visakha Steel Protection Committee thanked all the leaders for their support and especially lauded the efforts of CITU Telangana state committee for greeting the steel workers at railway stations and encouraging them. Protest programmes have been conducted throughout Andhra Pradesh  from August 1-3 to support the protesting steel workers.