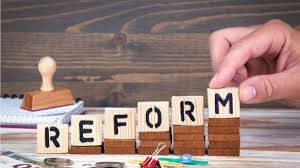 We are perpetually asked: Are you pro-reform, or, anti-reform?  No reform is in the abstract.  Every reform has content; a purpose.  These determine whether the Left supports any particular reform or opposes it.  The Central issue here is whether the reforms are in the interests of our people, their livelihoods and strengthening the country’s economic sovereignty.  This has been our approach all through these decades of economic reform in India.  This continues to be our approach.

THREE decades of economic reforms in India come in the backdrop of the continuing unprecedented struggle by our farmers against the three new agri-laws and for a legal guarantee of MSP.  These evoke memories of the Champaran satyagraha against forcible Indigo plantations a century ago, corporate farming, destruction of petty production (Modi’s `demonetisation’) and food shortages that may soon grow to famine proportions.

Global and Indian experiences have shown that the reform decades have been solely focused on maximising profits at the expense of impoverishing people, growing poverty, exponentially widening economic inequalities and the sharp fall in domestic demand in all countries.  The global economic slowdown and its impact on people’s life was devastatingly magnified with the onset of the pandemic that continues to ravage. This recalls what Marx had once said: “Capitalism has conjured up such gigantic means of production and of exchange, it is like the sorcerer who is no longer able to control the powers of the nether world whom he has called up by his spells”.

The reform process in India is integral to the international finance capital-dominated ideological construct of neo-liberalism. The objective here is the unbridled maximisation of profits unleashing the worst predatory character of capitalism – unleashing the “animal spirit”.  Large-scale privatisation of public assets, all public utilities and services, of all mineral resources, imposing “user charges” on people.  Neo-liberalism globally and in India provided a bonanza for the corporates.  Since its ascendency, taxes on the rich have declined globally by 79 per cent.  After the 2008 financial meltdown, most billionaires restored their wealth in three years and doubled it by 2018. This wealth has grown not through production but speculation which explains why this deep global recession has not impacted stock markets negatively.

On the other hand, 80 per cent of income earners globally have not recovered to pre-2008 level.  The attacks on organized industry and the rights of the working class have resulted in TUs that represented one in four workers in 1979 in the USA declining to represent only one in ten today.

On the other hand, data has shown that 170,000 people lost their jobs every hour in the month of April 2020.The wealth of Indian billionaires increased by 35 per cent during the lockdown and by 90 per cent since 2009 to USD 422.9 billion. In fact, the increase in wealth of the top 11 billionaires of India during the pandemic could sustain the NREGS scheme for 10 years or the health ministry for 10 years.

India has the world’s fourth-lowest health budget in terms of its share of government expenditure. If India’s top 11 billionaires are taxed at just one per cent on the increase in their wealth during the pandemic, will be enough to increase the allocation of Jan Aushadi Scheme by 140 times, which provides affordable medicines to the poor and marginalised.

Reform decades in India have sharply increased economic inequalities focusing on being profit-centric rather than being people-centric. PM Modi exhorts us to respect wealth creators.  Wealth is nothing but the monetisation of value, that is produced by the working people.  It is the value creators that need to be respected for the overall wealth of our people.

POVERTY: EXPONENTIAL GROWTH
Along with abolishing the Planning Commission, Modi government abandoned, what India followed since independence, the basic nutritional norm to measure poverty levels. The nutrition norm was fixed at 2,200 calories per person per day in rural and 2,100 calories in urban India.  The NSS large sample survey shows that according to this norm, 58 per cent in rural and 57 per cent in urban India in 1993-94 were below this poverty line.  The next similar NSS survey for 2011-12 shows the percentages were 68 and 65 respectively. The next large sample survey was done in 2017-18. But these NSS findings were suppressed by the Modi government to conceal the truth.  This government is also destroying our world-acclaimed database institutions. The data that leaked to the media shows an absolute drop of nine per cent in per capita real consumption expenditure (not just food) in rural India. Clearly, there is an unprecedented increase in absolute poverty in both rural and urban India even before the pandemic struck.  The situation since has become worse.

The Covid pandemic and the woes of our grossly inadequate health care for protecting people’s lives and livelihoods is exposed all too sharply.  The deep economic recession we are undergoing today is part of the global neo-liberal trajectory where profits are maximized through intensification of the exploitation of the people in whichever manner possible, from austerity measures to wage cuts, job layoffs and importantly, the destruction of petty production that was done in India through `demonetization’.  The encroachment of all avenues of economic activity and now destroying Indian agriculture for corporate profit, contract farming and consequent food scarcity tellingly demonstrates this.

Today, the Global Hunger Index places India in the “serious category”.  NFHS-5 shows alarming growth of malnutrition, particularly amongst children, infant mortality and other indices.  Last month India was downgraded by ‘two’ ranks in the SDG global index.  During this last one year, Pew Research Centre estimates that the number of people below the poverty line in India has grown from 60 to 134 million.  India has contributed 57.3 per cent to the growth of the global poor last year.  59.3 per cent of our middle classes have slipped into poverty.

COMMUNAL-CORPORATE NEXUS
What has emerged since 2014 is a venal cocktail of the fusion of corporate-communal nexus.  This aggressively pursues profit maximisation through the loot of national assets, large-scale privatisation of public sector, public utilities and mineral resources. This results in unprecedented levels of crony capitalism and political corruption.  This is accompanied by ruthless attacks on people’s democratic rights, civil liberties and human rights; treating all dissent as anti-national, indiscriminately arresting people under draconian laws like UAPA/sedition – a process that undermines the Indian Constitution and its guarantees to the people.

This has led the world to declare India as an “electoral autocracy”.  The global economic freedom index places India at 105, worsening from 79 last year.  The human freedom index ranks India 111 down from 94.  The UNDP Human Development Index pushes us down to 131 from 129 last year.

Along with growing misery for the vast majority of our people, this rising authoritarianism is moving close to Mussolini’s ominous definition of fascism as “fusion of corporates with governance”.

Globally, the bankruptcy of neoliberal reforms to revive the economy is being increasingly recognised. The Economist, surveying the alarmingly growing inequalities, concludes saying: “Inequality has reached such a stage where it can be inefficient and bad for growth”.

BANKRUPTCY OF NEO-LIBERAL REFORMS
Joseph Stiglitz, in his book `The Price of Inequality’, speaks of the top one per cent and other 99 per cent of the people and concludes: “Our economic growth, if properly measured, will be much higher than what we can achieve if our society remains deeply divided”.

All advanced countries have announced stimulus packages of massive State expenditures, which is an anathema to neoliberalism.  These are aimed at reviving domestic demand and economic activity.  Britain’s Prime Minister, Boris Johnson, prefaced a recent speech advocating increased governmental expenditures by saying: “I am not a Communist, but….”.

Modi government, however, is reticent to hike expenditures even while writing off huge unpaid loans taken by its cronies.  It imposes more crushing burdens on the people through daily petro hikes and consequent overall inflation. This is depressing domestic demand further deepening economic recession.

We, in India, need to seriously introspect this reform trajectory and reorient our priorities: strengthen agriculture, food security, invest in health, education, sharply increase public investments to build our much-needed infrastructure – both economic and social – to generate jobs and bolster domestic demand.  Not for humanitarian concerns alone. This is the only way for an equitable economic revival.  Ecological concerns, appropriate technology and, most importantly, rejecting all divisive polarizing trends that disrupt our social harmony feeding obscurantism and irrationalism, dehumanizing our society.

Such are the people-centric, not profit-centric reforms India needs today.

The axis for the realisation of such a reform direction is the strength of the people’s struggles. Popular movements and mobilisations projecting an alternative inclusive trajectory of reforms have to gain sufficient strength to force the Indian ruling classes to reverse the current direction that is heaping greater miseries and ruination of our people. The three decades of the reform process in India is the appropriate time to force such a course correction.