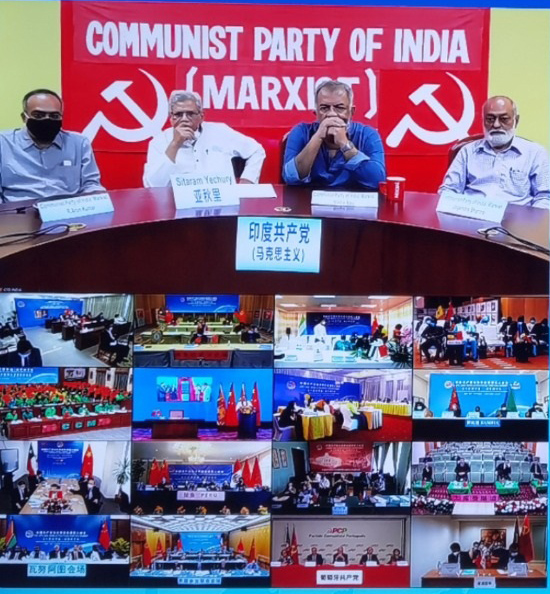 The Communist Party of China (CPC) organised an online World Political Parties Summit on July 6, 2021 on the theme ‘People’s Well-Being: Responsibilities of Political Parties’. Leaders of more than 500 political parties and organisations from over 160 countries participated in this summit. Xi Jinping, general secretary of the CPC inaugurated the summit and delivered the keynote speech. Below we reproduce the intervention of Sitaram Yechury general secretary of the Communist Party of India (Marxist) at the summit. Along with Sitaram Yechury, Nilotpal Basu, Polit Bureau member, Jogendra Sharma and R Arun Kumar Central Committee members also participated in this summit.

COMRADE Xi Jinping, general secretary, Communist Party of China, the leadership of the CPC and representatives of the world political parties, I extend my warm greetings to all of you.

This summit is being convened on the occasion of the centenary of the founding of the Communist Party of China. On behalf of the CPI(M), I once again reiterate our warm fraternal greetings to the CPC on this historic occasion. The CPI(M) has separately communicated its message of greetings to the CPC general secretary, Comrade Xi Jinping earlier.

The CPI(M) is heartened to learn that the CPC has reached the landmark completion of one of the centennial goals of building China into a “moderately prosperous society in all respects”. China has accomplished the yearning of the Chinese people for nearly 2500 years of pursuing “xiaokang” – a peaceful and happy life.

The century of the Communist Party of China made a decisive contribution towards realising this goal.

The over four decades of reforms and opening up adopted by the CPC since 1978 has achieved stupendous successes, outstripping the capitalist economic “miracles” of the 20th century – Germany, Japan and South Korea. The People’s Republic of China (PRC) is very close to emerging as the world’s biggest economy.

Of greater achievement is the fact that a gigantic 770 million people have been lifted out of poverty during these decades. The PRC has also achieved its goal of doubling its 2010 GDP and per capita income by 2020.

The exemplary manner in which the PRC tackled and contained the Covid pandemic, reopened its society and economy with requisite protections and put the economy back on a growth trajectory is a lesson for the world, establishing the superiority of socialism as a system compared to capitalism. Even through the Covid pandemic the PRC has been able to maintain average GDP growth rate of 9.2 per cent over the four decades since 1978.

The proposals that form the agenda for this summit on the theme “For the People’s Well-Being and Responsibilities of Political Parties” are both laudable and noble. However, to achieve the realisation of these proposals, the bitter realities that confront the world’s people and systems must be recognised. Particularly, the hectic ongoing efforts for strengthening US global hegemony in the post-Covid world.

On the proposals to promote values to be shared by all humankind like peace, development, fairness, justice, democracy and freedom there can be no dispute but given the ground realities, the realisation of these and lasting universal security, environmental protection, peace and common prosperity, multilateralism in international relations and the strict implementation of international laws will require a stronger political will and strength.

The realisation of these objectives will crucially depend on the direction of the policies and reforms undertaken which must be people-centric. But in today’s ground realities, policies and reforms in most parts of the globe are guided by being profit-centric, accompanied by intensification of class exploitation. Even during this period of the pandemic and associated lockdowns as millions are being pushed into poverty, hunger, unemployment and deprivation, 16 US billionaires are worth at least twice as much as they were in March 2020. Within three years after the 2008 financial meltdown, most billionaires restored their wealth and doubled that by 2018. On the other hand, 80 per cent of income earners globally have not recovered to the pre-2008 level.

At the global level, millions of people are involved in bitter struggles for their livelihood, in defence of their rights and attacks on democratic and civil liberties. We in India are engaged in bitter struggles to protect our national wealth from being looted for private corporate profits, to protect our harvests and agriculture from being placed at the mercy of global agri-businesses, to protect the rights of the working class and the working people.

While desiring a better world, most importantly a better life, better health, better education, nutrition globally, the CPI(M) extends its solidarity with all those engaged in life and death struggles for survival and improvement in livelihood.

I thank you very much for providing me this opportunity and reiterate once again the CPI(M)’s fraternal greetings to the CPC on its centenary and wishing greater successes in the development of China and its people.