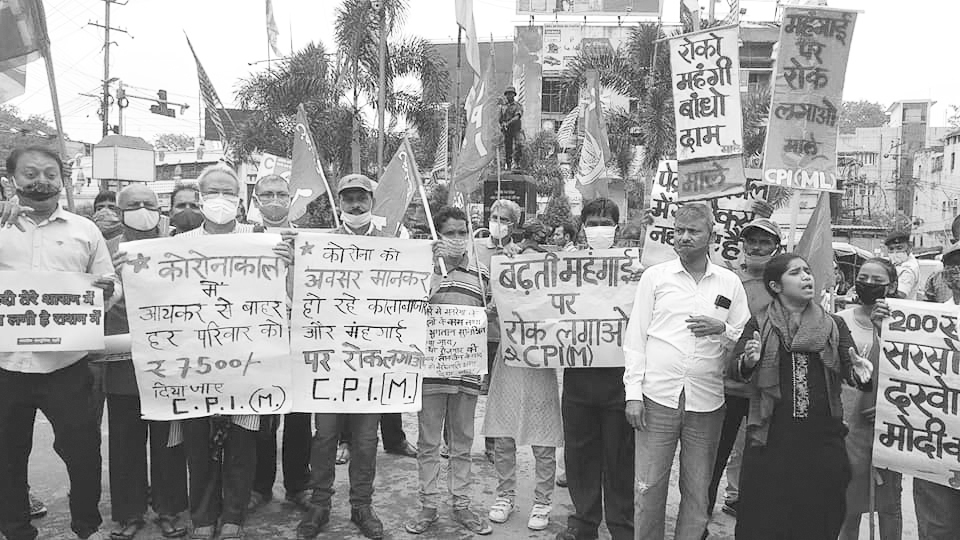 THE blight of the pandemic which has caused mass suffering and deaths during the second wave is now compounded by the manifold miseries inflicted on the people by the Modi government.  The people are experiencing unemployment, falling incomes and hunger.  On top of this comes the rising inflation and price rise of essential commodities – a creation of the policies of the government.

In the months of April and May, 2.2 crore (22 million) people lost their jobs. In May, the unemployment rate reached 12 per cent (source: CMIE).  The household consumption levels have touched a new low and rising hunger is seeing growing queues outside free food centres.

It is at such a time that the government has imposed a cruel price rise on the people.  The main cause for this inflation is the ever increasing price of diesel and petrol.  Since May 4, the prices have been hiked 24 times and in June, twelve times so far (upto 22nd).  Now petrol is selling at Rs 100 or more per litre in seven states and union territories, including metropolitan cities like Mumbai, Hyderabad and Bengaluru.

These hikes in prices are mainly due to the huge burden of central excise duties and other taxes on petroleum products.  These taxes constitute 55 to 58 per cent of the price of petrol and diesel.  As a result, there has been a whopping 138 per cent increase in revenue from petroleum products since 2014-15.

The spiraling prices of petrol and diesel have had a cascading effect on prices of essential commodities by driving up transportation costs and rise in prices of various inputs.

So, even as the growth rate plummets and recessionary conditions prevail, inflation is getting entrenched.  The increase in the wholesale price index in May 2021 was nearly 13 per cent (12.94) which is the highest in 11 years. The consumer price index rose by 6.3 per cent during the same period.  The prices of food items like rice, edible oils, pulses, vegetables, and eggs have sky-rocketed.  Edible oil saw the worst increase of upto 60 per cent.   Farmers are badly hit by the increasing cost of diesel used for their pump-sets and tractors.

The steep rise in the prices of cooking gas is because of the drastic cut in subsidy.  While in the year 2019-20, the total direct cash subsidy for cooking gas was Rs 22,635 crore, this has now come down to only Rs 3,559 crore (till February 2021).  As a result, the entire burden has been put on the consumers.  The failure of the Modi government to enforce price control measures is stark.  It had already diluted the Essential Commodities Act to remove controls on a range of commodities including edible oils.  Hoarding and speculation by big traders have allowed them to make super-profits out of edible oils.  This brings out the anti-people nature of the amendment to the Essential Commodities Act, which was undertaken along with other farm laws.

The minister for petroleum and natural gas, Dharmendra Pradhan, said recently that the fuel prices cannot be brought down through reducing taxes because that money is required for welfare schemes and the vaccination programme. But it is the government which reduced its revenues by cutting down corporate taxes and losing Rs 1.45 lakh crore in the process, apart from other concessions and exemptions.  Any loss in revenue by rolling back central excise duties and cess on petroleum products can be recouped by restoring the corporate tax rate to the pre-2019 level and sufficient revenues can be garnered by imposing a wealth tax on the super-rich.

However, the BJP government wishes to pamper the corporates and the super-rich and squeeze the people in times of distress to earn some revenue.  The unbearable burdens imposed on the people through price rise cannot be tolerated. It is in this context that the Left parties are conducting a fortnight-long protest from June 16 to 30 against price rise and demanding steps to curb inflation.  They have demanded a cut in the central excise duties and other taxes on petrol and diesel; restoration of the subsidy for cooking gas;  steps to ensure price control through the use of Essential Commodities Act and strict action against future trade speculation in vegetable oils; provision of 10 kg of free foodgrains to all individuals, including a food kit with pulses, edible oil, sugar, tea etc and direct cash transfer of Rs 7,500 per month for six months to all families who are non-income tax payees.

The fight for speedy free vaccination for all, supply of free food kits, expansion of employment guarantee programmes and measures to curb price rise, including cuts in the central taxes on petroleum products must go hand-in-hand.