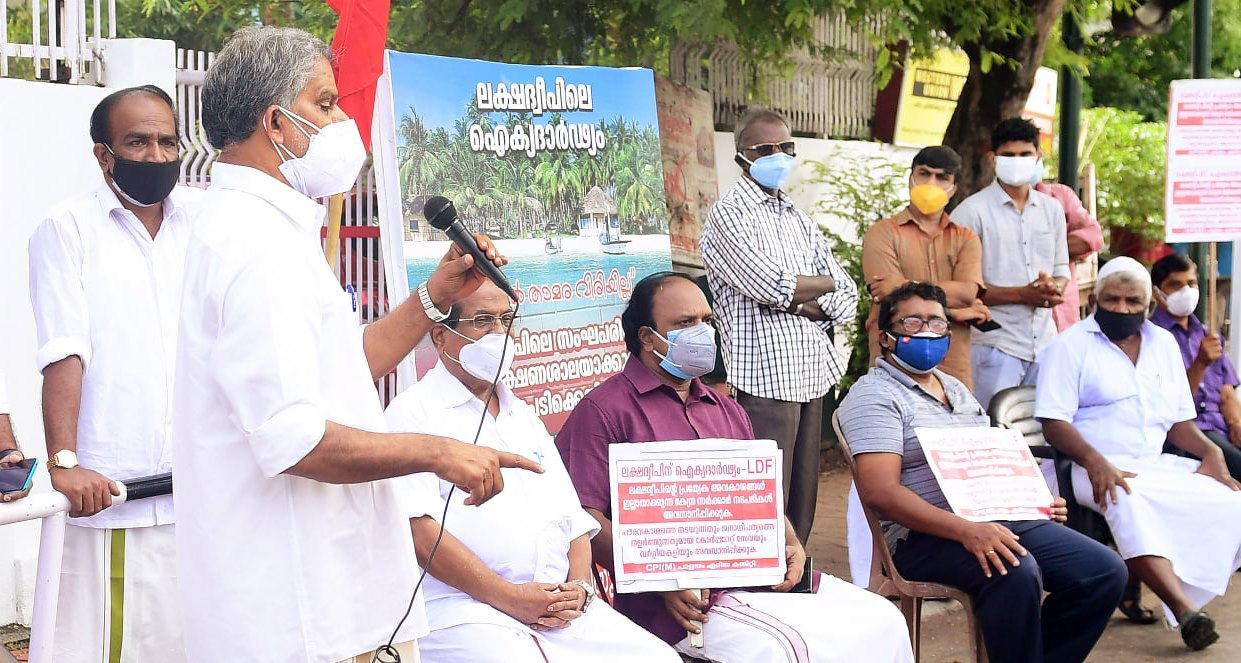 THE people of Kerala extended wholehearted support to the people of Lakshadweep under the banner of Left Democratic Front and CPI(M), as lakhs of people, on June 3rd came forward to participate in solidarity programmes supporting the islanders in their fight against Sangh Parivar’s ulterior motives to saffronise their homeland.

CPI(M) started a campaign supporting the islanders right from the beginning. On May 24, CPI(M) state acting secretary, A Vijayaraghavan issued a statement against the administrator's move to curtail the rights of the people on the island. He appealed to all people to take part in the protest against the unilateral decisions made by Praful Khoda Patel on destroying the sheds of fishermen and dismissal of 190 employees.

Prior to this, CPI(M) Central Committee member and Rajya Sabha member Elamaram Karim had written a letter to the president of India citing the examples of authoritarian decisions by the administrator of the UT of Lakshadweep and the increasing unrest among people against unilateral decisions.

As Praful Khoda Patel was elevated as the administrator, anganwadi centres were closed, and liquor bars were opened for the first time in the name of tourism in Lakshadweep, where 90 per cent of the population has no alcohol consumption. Meat was excluded from the lunch menu of school children and a law was brought in saying that those contesting the panchayat elections should not have more than two children.  It also usurps power through undemocratic interference in education, health, agriculture, fisheries and animal husbandry departments of the district panchayats. The Goonda Act was unnecessarily enforced in Lakshadweep, where prisons and police stations exist without prisoners and where not a single convict was found.

They began to sever ties with Beypore Port, which had the longest connection to Lakshadweep, and decided to move cargo and other goods through Mangalore port in Karnataka. The government is interfering in the freedom of people to decide what food to consume. The administrator is making an authoritarian move to wipe out the islanders from the administrative system.

Mounting pressure against these moves, LDF’s parliament members held a sit-in protest in front of the Raj Bhavan on June 3. Lakhs of LDF activists gathered before the various central government offices all over the state and registered their protest against the administrator on the same day.  Elamaram Kareem, V Sivadasan, A M Arif, K Somaprasad John Brittas, M V Shreyams Kumar and Thomas Chazhikadan attended the dharna. Dharnas were held in all district centres while observing Covid protocol. A Vijayaraghavan addressed the dharna in Palayam in Thiruvananthapuram.

The administrator’s denial of permission to MPs to visit Lakshadweep also caused the wrath of the people. Many LDF workers along with MPs gathered in the Lakshadweep administration office in Wellington Island in Kochi. Inaugurating a protest demonstration, A Vijayaraghavan has said that the central government is trying to turn Lakshadweep into an open jail.  “This move should not be allowed. Continuing protests are the need of the hour. The new move is nothing but an encroachment on the culture of islanders. The administrator has ridiculed the parliamentary system, by denying permission to the MPs to visit the island, which is part of our country,” he said.