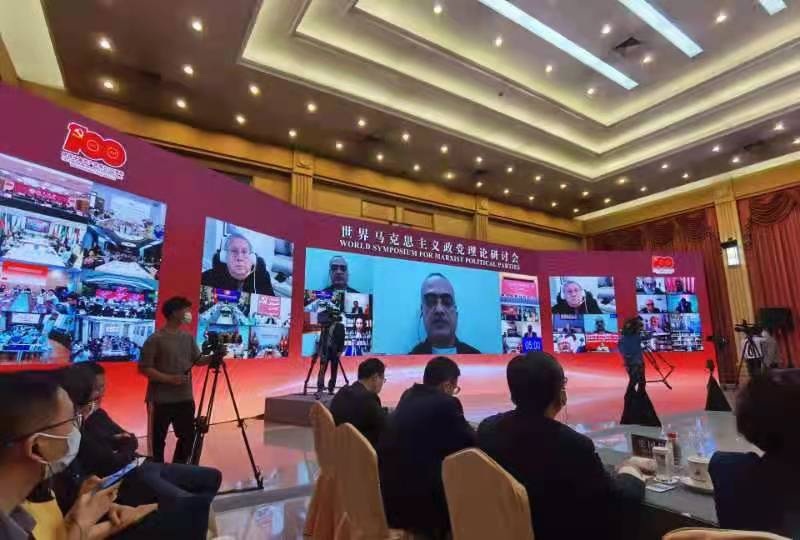 Online Symposium on Contemporary Marxism: Development and Innovation in Theory and Practice

Below we publish the full text of the fraternal message of greetings sent to Xi Jinping, general secretary of the Communist Party of China (CPC), by Sitaram Yechury, general secretary, CPI(M) on the occasion of the centenary of the founding of the Communist Party of China. This message was read out by R Arun Kumar, Central Committee member of the Party, at the online symposium held on May 27

ON behalf of the Communist party of India (Marxist), I convey my warm fraternal communist greetings to the Communist Party of China (CPC) on the occasion of the centenary of the foundation of the CPC.

The Communist Party of India was founded a few months earlier outside of the Indian territory which was then ruled by a ruthless colonial power – British. Since then, during the course of this century, as fraternal communist parties both our parties have maintained fraternal communist relations, through ups and downs, all through the century.

The CPI(M) continues to underline that Marxism-Leninism is a creative science. It is supremely anti-dogmatic. It can never be reduced to a set of formulae. As a creative science, while strictly adhering to its revolutionary principles and emancipatory objectives, it has to be adapted to the concrete conditions obtaining in every country at every point of time. As Lenin had said “concrete analysis of concrete conditions is the living essence of dialectics”.

The history of the last century of the CPC is a testimony to the manner in which this creative science of Marxism-Leninism was adapted to the concrete conditions obtaining in China. By such an application, learning from the inspiration and experience of the Russian revolution, the CPC adopted a course innovating both the application of theory and practice to successfully assume the leadership of the national liberation struggle. This led to the eventual establishment of socialist China – the People’s Republic of China. During this long history, at every twist and turn, the CPC had to undergo many trials and tribulations. Many a mistake was committed which were identified, located and corrected, steering the consolidation of socialist China. There were many bitter struggles, including instances that caused social turmoil, but the CPC emerged victorious correcting these mistakes ensuring that such mistakes are not repeated.

The CPC’s experience confirms that mistakes identified, corrected and conditions for their repetition erased, is the essence for carrying forward the people’s movement for emancipation into the future.

Through this process of innovation, self-critical evaluation and correction, CPC embarked upon a bold trajectory of reforms in 1978. The stupendous results of this are there for everyone to see and for the whole world to stand up and notice. This process of reforms and opening up, we are sure will be guided by the revolutionary tenets of Marxism-Leninism and not give opportunity for the enemies of socialism who are eager to pounce on every possible opportunity to weaken and undermine socialism. During these decades of reforms and opening up, CPC confronted successfully all adversaries who in pursuance of imperialism’s objective of undermining socialism targeted the PRC. These class battles continue in imperialist efforts to shape the post Covid world. CPI(M) wishes the CPC all success in defeating such machinations.

Today’s world has confirmed the Marxist-Leninist understanding that capitalism, inherently inhuman, can never be a system free from human exploitation and systemic crises. Its rationale of existence is profit maximisation and hence intensified exploitation. The first two decades of the 21st century have shown that global capitalism is incapable of emerging from the crisis it itself created particularly since the global financial meltdown of 2008.

As the global economy was slowing down and moving towards a recession, came the Covid pandemic that devastated the already faltering global economy. International finance capital led imperialist neoliberal globalisation is showing its total bankruptcy in providing any solution.

The exemplary manner in which the PRC tackled and contained the Covid pandemic reopened its society and economy with the requisite precautions and put back the economy on a growth trajectory, is a lesson for the world establishing the superiority of socialism as a system over capitalism.

It is because of the CPC’s initiation of such measures that China could eliminate absolute poverty by 2020, reduce unemployment by creating millions of jobs every year, strengthen its health care system and build world class infrastructure and educational institutions. China is reaping dividends from the investments made in research and development in the form of science and technological advancements. Your efforts to eliminate inequalities and corruption, raising the quality of life are praiseworthy.

While hailing your successes and learning from your own self-critical corrections, the Communist Party of India (Marxist) conveys its revolutionary greetings and best wishes for achieving your other centennial goal of building a ‘modern socialist country that is prosperous, strong, democratic, culturally advanced and harmonious’ by 2049.

CPI(M) is confident that the PRC under CPC’s leadership will pursue a peaceful foreign policy, consolidating good neighbourly relations, contributing to peace and stability in South Asia and in the world.