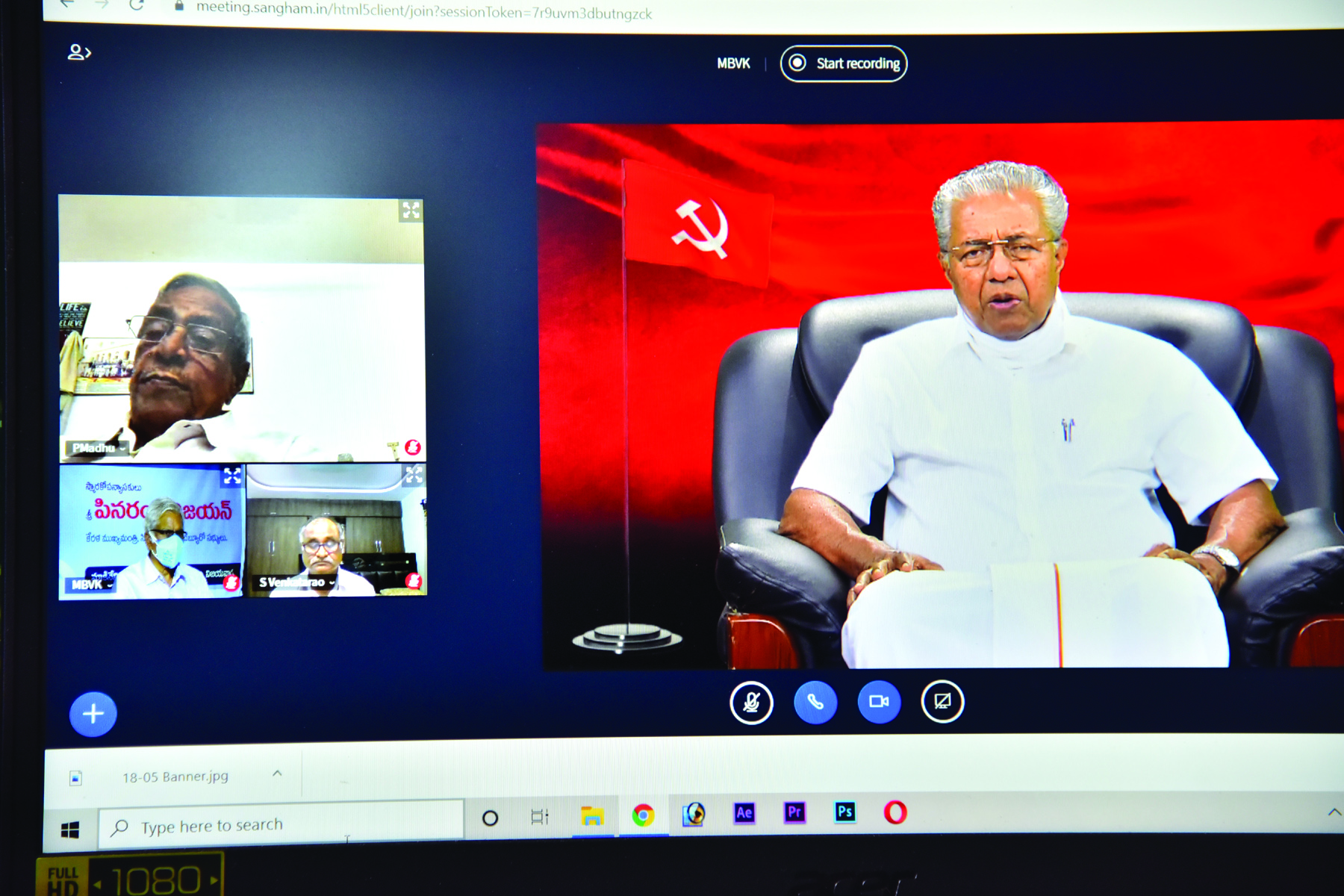 Delivering a lecture on ‘Covid-19 Crisis and the Role of Governments’ on the eve of the 36th death anniversary of Comrade Puchalapalli Sundarayya, the first general secretary of CPI(M) on May 19, Kerala chief minister Pinarayi Vijayan said it is the responsibility of the governments to protect the lives and livelihoods of the people and that it is their fundamental duty in a democracy. The online meeting was presided over by P Madhu, managing trustee of the Makineni Basavapunnaiah Vignana kendram (MBVK) trust.

Vijayan hailed the tremendous role of P Sundarayya in building the communist movement in South India and especially in Kerala, and paid rich tributes to the departed legend. He mentioned about the role Sundarayya played in the freedom movement of India and the heroic Telangana Peasants Armed struggle. Vijayan explained about the contagious diseases like cholera in the pre-independent India and the relief activities took up by Sundarayya, his brother Dr Ram and others. Vijayan admired the efforts of MBVK and other mass organisations running covid isolation centres in Andhra Pradesh drawing inspiration from comrades like Sundarayya, Basavapunnaiah and other stalwarts.

The LDF government in the last four years has strengthened the robust public health system and through that it has been effectively combating the Covid-19, Vijayan said. All the primary health centres have been upgraded into family health centres and super speciality services are rendered at district and taluk hospitals, he said. Rs 1,600 crores through KIIFB has been infused into the health infrastructure and more than 5,200 additional posts have been filled up in the public health system. An advanced institute of virology and a science consortium were set up, enhancing production of drugs in public sector pharmaceutical industries. “By enhancing the inherent strength of our public health system, we were able to confront the viruses like Nipah and novel Corona”, Pinarayi said.

Kerala government was the first to announce lockdown last year and also a special economic package of Rs 20,000 crore. Unlike the central government, the Kerala government gave sufficient notice and financial support to the people. Kits with essential commodities, food from community kitchens and Kudumbashree hotels etc were given to the people. Not a single person was hungry during this period in Kerala. The state government took care of the guest (migrant) workers.

During the second wave of Covid, the government of Kerala provided adequate oxygen supply, enough ventilators, ICU beds etc and has been trying hard to save every possible life. Covid testing and providing  the treatment is free in government facilities and all the prices for services in private hospitals are regulated by the state government. The government simultaneously has decentralised and strengthened the local self governments also.

Pinarayi explained the steps taken by the government for uninterrupted schooling through televised methods. He exposed the central government policies in his speech. Their dual policy in vaccine pricing, sowing communal hatred and playing the blame game during this pandemic period and implementing anti-people neoliberal economic policies were exposed.

P Madhu in his address explained about the Covid isolation centres being run throughout the state and medical tele-helplines etc. He assured that the help and assistance will be expanded further.  Y Venkateswara Rao, secretary of MBVK trust welcomed the speakers and P Murali Krishna in-charge of the state vignana kendras proposed the vote of thanks.