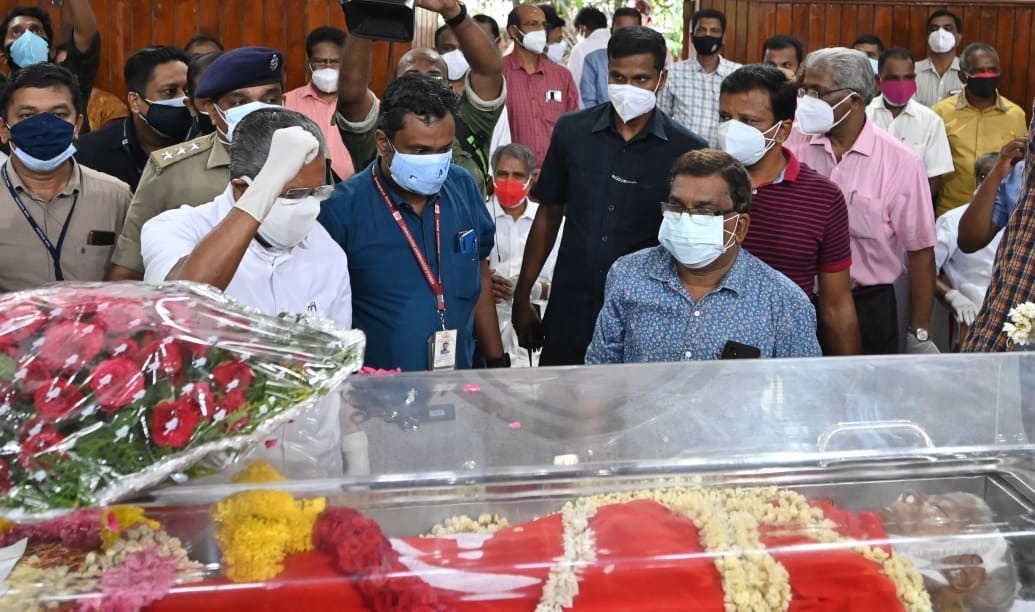 VETERAN communist leader K R  Gouri Amma is no more. Firebrand Communist K R Gouri Amma (102) passed away at a private hospital in Thiruvananthapuram on May 11 morning due to age-related ailments.

Gouri Amma has had an exciting and lengthy political career in Kerala as a student leader, trade unionist, kisan and women’s leader, and minister in successive Left-led governments. Her life was synonymous with the history of modern Kerala. The courage she showed throughout her life as a revolutionary is said to be unparalleled.

She served as the  minister of revenue, excise, and Devaswom departments for the historic E M S Namboodiripad government which was the  first democratically elected communist government in the world.

Among her greatest contributions to the people of Kerala are the introduction of the Eviction Prohibition bill, Land Reforms Bill and the Agriculture Relations Bill. She took up the issues of the downtrodden and marginalised. Her views on womanhood led to the introduction of Kerala Women’s Commission Bill to protect the exploited and vulnerable women.

Except in the first universal suffrage elections in Travancore in 1948 and in the 1977 and 2006 assembly elections, she was always victorious. She was elected to the Travancore and Cochin legislative assemblies in 1952 and 1954 respectively, with an overwhelming majority. Gouri Amma gained impressive victories in all other assembly elections.

She led the revenue, vigilance, industry, food, agriculture, excise, social welfare, Devaswom, and animal husbandry departments and formed the Janadhipathya Samrakshana Samithi (JSS) in  1994 after she was expelled from CPI(M). JSS became a part of UDF and Gowri Amma became a minister in the UDF cabinet in two terms.

Gouri was born on July 14, 1919 to K A Raman and Parvathi Amma as their seventh daughter in Pattanakkad village in Alappuzha. She attended schools at Thuravoor and Cherthala and completed graduation from Maharaja’s College, Ernakulam. She also completed her law degree from Government Law College, Ernakulam.

Under the influence of elder brother and trade union leader Sukumaran, she entered politics at a time when women hardly found a place in politics. "After the death of my father, Annan (her brother) would come to my house for lunch. One or two comrades would also come with him. They used to work with Annan in various trade unions. The Communist Party did not have many people from the middle class and upper class who were educated at the time. Hence, Annan had to head several trade unions. Annan would stay back for some time after lunch and would talk about Communist and labour movements,” her autobiography says.

She came into the public eye in 1946 as a student activist urging the then princely state of Travancore to join the Indian Union. She participated in student struggles as part of the Quit India movement and became the first woman from the backward-caste Ezhava community to graduate in law.

She married TV Thomas, a communist leader and member of the first cabinet. After the split of the Communist Party in 1964, TV Thomas stood with the CPI and Gowri Amma became the leader of CPI(M).

She became a part of the communist movement in Kerala while studying law. P Krishna Pillai, one of the founders of the then Communist Party gave membership to her.  She worked hard to lay the foundation of the Party in the state along with communist stalwarts like E M S Namboodripad, A K Gopalan and E K Nayanar.

She was president of the Kerala Karshaka Sangham (AIKS) from 1960 to 1984 and the Kerala Mahila Sangham from 1967 to 1976. Gowri Amma was jailed in 1948, the year she joined the Communist Party. The party was banned at the time for its 'hostile' stance against the government. Gowri Amma was in prison at the Cherthala police station for six months, after which she was housed at the central prison Poojappura. Jailed on a number of occasions for her political activities, she had to undergo “unimaginable torture” at the hands of the police early in her career.

By the late 1980s, Gouri Amma’s reputation as a communist and a feisty, no-nonsense administrator had reached its zenith. However, in 1994 she was expelled from the CPI(M) on charges of anti-party activities. At that time she was serving as a member of the secretariat of the CPI(M) Kerala state committee.

Following this, she established a new political party JSS. JSS later joined the UDF and Gouri became minister of agriculture in the A K Antony and Oommen Chandy ministries. But in 2016, she severed relations with the UDF. Thereafter, she remained a supporter of the LDF.

The All India Democratic Women’s Association (AIDWA) paid homage to Gowri Amma. It said, “A true revolutionary in the full sense of the term, and a real champion of the downtrodden, she was always in the forefront of agitations against oppression, and did not fear even court arrest and imprisonment, for the successful culmination of the objectives for which she stood.”
The AIDWA remembered her as one of the acclaimed chief architects of land reforms that heralded the weakening of feudalism in Kerala. “Com Gouri Amma is one of the few leaders in the history of Kerala who sacrificed everything in life for the cause of the people,” the AIDWA said in its tribute.

Upon her demise, prominent leaders including chief minister, Pinarayi Vijayan and CPI(M) state secretary in-charge A Vijayaraghavan paid tributes to Gowri Amma at Ayyankali Hall in Thiruvananthapuram and the last rites were performed at Valiya Chudukadu in Alappuzha.

On the Death of Gauri Amma

Sitaram Yechury, general secretary, CPI(M) sent the following message to the people of Kerala on the death of Gauri Amma on May 11, 2021.

IT is with deep pain and grief that I received the news of the death of K R Gauri Amma, an outstanding leader of the people’s movement in Kerala.

Gauri Amma was the Minister for Revenue, Excise and Devasom in the first communist government elected in Kerala, headed by E M S Nambooridipad in 1957. She is credited with being one of the architects of land reforms in Kerala.

Even before the formation of the present state of Kerala, she was elected to the Travancore-Kochi Legislative Assembly on two occasions. She was a minister in various governments in the state including the one headed by the United Democratic Front for some time after she was expelled from the CPI(M) in 1994. However, disillusioned with the UDF she had been cooperating with the Left Democratic Front for the past few years.

Married to another stalwart of the Communist movement in Kerala, T V Thomas, Gauri Amma sided with the CPI(M) when the split in the united party took place in 1964, even while Thomas remained in the CPI.

In her departure, Kerala has lost the last among the remaining members of the 1957 communist ministry headed by E M S Namboodiripad. Kerala has lost one of its illustrious daughters who commanded wide respect and admiration.

I pay tributes to her memory and join the people of Kerala in mourning her loss.