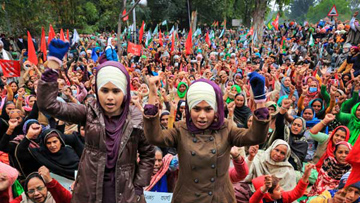 LAST week the historic farmers’ struggle had two great events to celebrate. The first was May Day and the second was the defeat of the BJP in the assembly elections in three major states -- Kerala, Tamil Nadu, and West Bengal -- followed closely by the big setback to it in the three-tier panchayat elections in Uttar Pradesh.

FARMERS HAIL BJP’S POLL DEFEAT
Among lakhs of farmers whose struggle has now crossed five months, with over 400 martyrs, there has been tremendous anger building up against the BJP-RSS central government led by Modi and Shah. This was seen not only at the Delhi borders but also in the hundreds of massive Kisan Mahapanchayats across the country that took place in February and March 2021. Calls for social boycott of BJP leaders have been given and implemented in parts of North India. The Samyukta Kisan Morcha (SKM) and the All India Kisan Sangharsh Coordination Committee (AIKSCC) sent its leaders to West Bengal, Assam, Kerala, and Tamil Nadu to appeal to the peasantry and the people to vote against the BJP and its allies in these election-going states.

The defeat of the BJP in the three major states was widely hailed by the farmers in the struggle. Both the SKM and the AIKSCC released statements welcoming the defeat of the BJP. To preserve unity among their ranks, they scrupulously avoided naming the winners.

The farmers’ joy was doubled with the results of the three-tier panchayat elections in Uttar Pradesh, which came two days later. Although these elections in UP are not held on party symbols, it is generally clear which candidate is supported by which political party. According to preliminary results, the BJP has got a big setback in most districts. Out of the total 3,050 district panchayat wards, it is reported in national dailies that the Samajwadi Party (SP) has won 747, the BJP is behind at 666, followed by the Bahujan Samaj Party (BSP) at 322 and the Congress at 77.

The ‘unkindest cut of all’ for the BJP is that it has won only eight of the 40 district panchayat wards in Ayodhya, eight out of 33 in Mathura, and seven out of 40 in Varanasi. It has won only three out of 25 district panchayat wards in Lucknow, four out of 33 in Meerut, four out of 19 in Shamli, four out of 20 in Baghpat, eight out of 56 in Bijnor, 11 out of 45 in Muzaffarnagar, and 20 out of 68 in Gorakhpur. The SP is far ahead in many places and the RLD and BSP in others. There are a large number of independents who have won, whom the BJP will surely try to purchase. But the message given by the voters of Uttar Pradesh is crystal clear and needs to be consolidated.

Uttar Pradesh, Uttarakhand, and Punjab are among the states where state assembly elections are due in February 2022. In Punjab the BJP will be lucky if it can save its security deposit in most seats, such is the atmosphere due to the massive farmers’ struggle, which has been on for nearly one year now. The SKM has already vowed that it will bend all its efforts and energies to ensure the defeat of the BJP in Uttar Pradesh and Uttarakhand.

MAY DAY: TOWARDS WORKER-PEASANT UNITY
May Day was enthusiastically celebrated by tens of thousands of peasants and workers at all the Delhi borders and throughout the country, as ‘worker-peasant unity day’. This was as per the joint call given by the SKM and the Central Trade Unions (CTU). Thousands of workers joined their peasant brothers and sisters at the Delhi borders and large public meetings were held to strengthen worker-peasant unity against their common class enemy - the unholy alliance of the BJP-RSS central government and the domestic and foreign corporate lobby.

The criminal culpability of the Modi-Shah regime, which has led to the ‘genocide’ (as the Allahabad High Court itself put it) of thousands of people without oxygen, was denounced in all these public meetings. All over the country too, lakhs of workers and peasants came together to celebrate May Day, following Covid-19 protocols.

On April 28, a joint online meeting of the leaders of the SKM and the CTU was held. Both these joint platforms have been cooperating with each other very well ever since their united struggle began on November 26, 2020 -- with an all-India strike, a Rural Bharat Bandh , and the ‘Chalo Delhi’ call. In this meeting, the BJP central government’s scandalous handling of the Covid situation was condemned and urgent demands made. It was decided to further strengthen this mutual solidarity and forge united actions on five major issues -- repeal of farm laws, repeal of labour codes, withdrawal of electricity bill, central law to guarantee MSP and procurement, and opposition to privatisation and corporatisation. A joint statement of the CTU and SKM with the Covid-related demands and peasant-worker-related demands was released.

On April 30, an online meeting of the central leadership of the CITU-AIKS-AIAWU was held. It was agreed that in this situation of great pain and distress to the people, all the three organisations would provide all possible help, support and relief to the Covid-affected people. At the same time, they would together expose the criminal negligence of the BJP government in addressing the severe health crisis and its utilization of the crisis to push through anti-people policies. Though big mobilisations are not possible or advisable now due to the pandemic and related lockdowns, curfews in different states, the meeting agreed that joint efforts would begin to prepare the ground for larger joint mobilisations later.  To begin with, a joint online countrywide public meeting will be held on Saturday (May 8) at 5 pm, which will be addressed by the general secretaries and presidents of the CITU, AIKS, and the AIAWU.