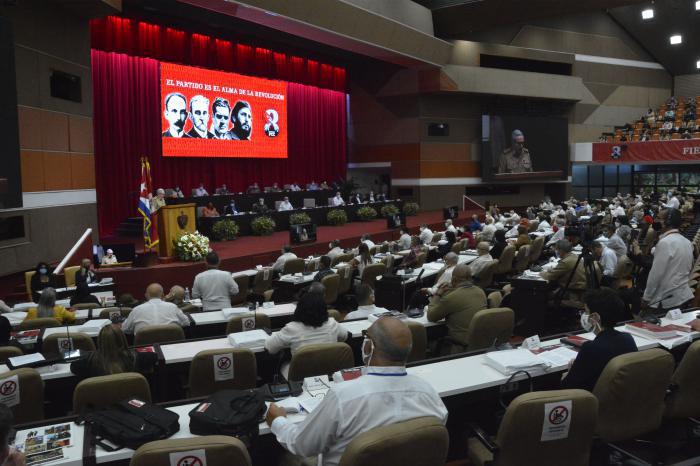 THE spectacle of the whole world petrified by the Covid pandemic and of little Cuba confidently engaging with it has drawn the attention and admiration of humanity. Now Cuba is again in the news for the so-called ‘end’ of the ‘Çastro era,’ as the outcome of the 8th Congress of the Communist Party of Cuba. The change of guard in the Cuban Party from the revolutionary heroes of the Cuban struggle from 1953 to 59 to the new generation of communists is indeed historic. But it is equally important to note that the change also ensures continuity of the communist tradition in Cuba.

The most important revolutionary task   in times of revolutionary struggles is to keep the Communist Party intact, even as it is the bounden duty of the Party to protect the revolution’, observed Miguel Diaz Canel, taking over the reins of the Cuban Communist Party as its First Secretary. In a tweet, he said “the Congress would be where ideas are entrenched, history recognised and the future discussed.” Without a doubt the 8th Congress of CPC held from April 16-19, 2021,  fulfilled those tasks.

Due to the Covid 19 situation, there were only 300 delegates representing seven lakh party members, in the four-day session of the party congress. However the documents were distributed in advance to be discussed by delegates in provinces in order to forward their modifications and amendment if any. Work in the ideological front, socio-economic conditions, cadre policy, confronting the economic blockade, battle against the pandemic, etc., were the important issues contained in the central report presented by Raul Castro Ruz.

Raul Castro who had the satisfaction of handing over the leadership responsibilities of the Party and Government to a Post Sierra Maestra generation conducted himself in an exemplary manner, refusing to take up any other official position, exactly the same way Fidel did. He said “I am retiring as a simple revolutionary fighter and as long as I live I will be ready with my foot in the stirrups to defend the fatherland, revolution, and socialism.”

Immediately after the revolution, Fidel Castro had to undertake multiple roles including that of the head of the State, Party, Government, and Military. This was due to the precarious situation that prevailed in Cuba at that time. However over the last fifteen years, through systematic consultations, the constitution has been modified with some important changes. The most important factor is restoring the prime ministership. President will have a maximum of two terms of five years. The President of the National Assembly of People’s Power, Esteban Lazo Hernandez , and Prime Minister, Manuel Marrero Cruz form a team of leadership according to the new constitution.

Muguel Dias Canel, President of Cuba for the last three years who has been now elected by the new Central Committee of the 8th Party Congress as the first secretary of CPC is a professional electronics engineer. He developed through Young Communists League. He undertook international responsibility as a head of a brigade in Nicaragua. He had undergone three years of military duty also. He served as the first secretary of CPC in two provinces before working as minister for higher education. He actively campaigned for the protection of the human rights of the transgender community. Canel became a member of the Polit Bureau(PB) in 2003. The development of the new generation of Cuban communists was undertaken by the “Historic Generation” under the watchful eyes of Fidel, Raul, and others during the last two decades.

The process of training and developing a youthful leadership has to be a continuous process and certain institutional safeguards are also needed for the same. As part of this, the CPC has fixed an age restriction of 60 years for CC members and 70 years for PB members. Women's representation in CC is around 50 per cent. Three women comrades are there in the 14 members PB.

The most important outcome of the Party Congress is that the Cuban communists have set at rest probing questions about who would lead the Party and Government after Castro. The Cuban communists have successfully lived up to their commitment to cope up with the complexities and challenges of a changing world and respond creatively to the new threats of hostile forces.

Cuba faces the deadly impact of the Covid pandemic like other nations. However, Cuba also faces another grave crisis unknown to other countries. It is the most deleterious impact of the economic blockade imposed on Cuba by America and its allies for the last six decades. This in fact is naked aggression on Cuba. The United Nations General Assembly has been passing resolutions with large majorities every year since 1992 against the US blockade over Cuba. As many as 187 to 191 nations have stood behind Cuba with only America and its two or three satellites voting against. Though US President, Barak Obama had brought in some relaxations in the blockade, Donald Trump not only reinstated the restrictions but cruelly strengthened them further. It is not yet clear as to whether Joe Biden would be moderate on this. In 2018 it was estimated that the Cuban economy suffered a loss of $144 billion on account of this economic embargo.

To tide over this unprecedented economic crisis, Cuba is experimenting with small-scale private entrepreneurship and foreign investment in selected sectors even as it continues to retain the overall socialist economic development. While the basic structure is that of a planned socialist economy, some experimentation is being undertaken. Cuba has before it Russia’s experiences in New Economic Policy under Lenin and China’s experiments in this direction. But the experiments in Cuba are not carbon copies of Chinese or Russian experiments. These should be seen as attempts to get over the onslaughts of the blockade, economic imperialism, and tyranny of finance capital. The world is watching with interest the economic interventions in Cuba, introduced after a proper evaluation of the objective conditions prevailing there.

I am reminded of what Fidel Castro said three decades ago to a delegation under the leadership of Comrade HKS Surjit. Fidel said: “our political and economic cooperation with USSR has been mutually beneficial, more so for Cuba. But we have only implemented the Soviet models with changes suitable for Cuba. In some cases, we have not implemented them finding them unsuitable for Cuban conditions.” The inner strength displayed by Cuba in taking such decisions is remarkable. To the best of our knowledge, this approach is what they are following even now. It is a sign of hope.

The constitutional changes approved by public referendum two years ago have brought in significant changes in the political and economic structures. These changes have been incorporated, holding fast to the principles of the primacy of the Communist Party and socialist economic structure. The changes in the 1976 constitution have been brought in through a process of consultation and consensus evolved through a series of debates on an unprecedented scale within and outside the Party. Some of the proposals made in the early stages were withheld after comprehensive consultations. For example, there was an issue relating to the democratic rights of the LGBT community. The question to be decided was as to how marriage should be defined, whether as a union of one man and woman or as a union of two individuals. After a national-level discussion, it was decided to postpone the decision as it was felt that a more comprehensive understanding of the issue was required.  At the same time, the human rights of the LGBT community have been protected in the family code strongly.

Miguel Diaz Canel, the present head of the Party and the Government  who is a representative of the new generation was not even born in 1959 when comrades Fidel Castro, Che Guvera, Raul Castro, Abel Santa Maria, Camilo Sien Fugus , Vilma Espien, and the likes joined together to make a success of the Cuban struggle for liberation. This inevitable change has happened while ensuring continuity of the revolutionary spirit. The communist freedom fighters and progressive-minded people all over the world are looking at these changes with great expectations. Cuba continues to be a socialist lighthouse for all those who are engaged in protracted struggles against extreme right-wing forces all over the world. Like Vietnam, Cuba is a great model which exudes great inspiration across the world.