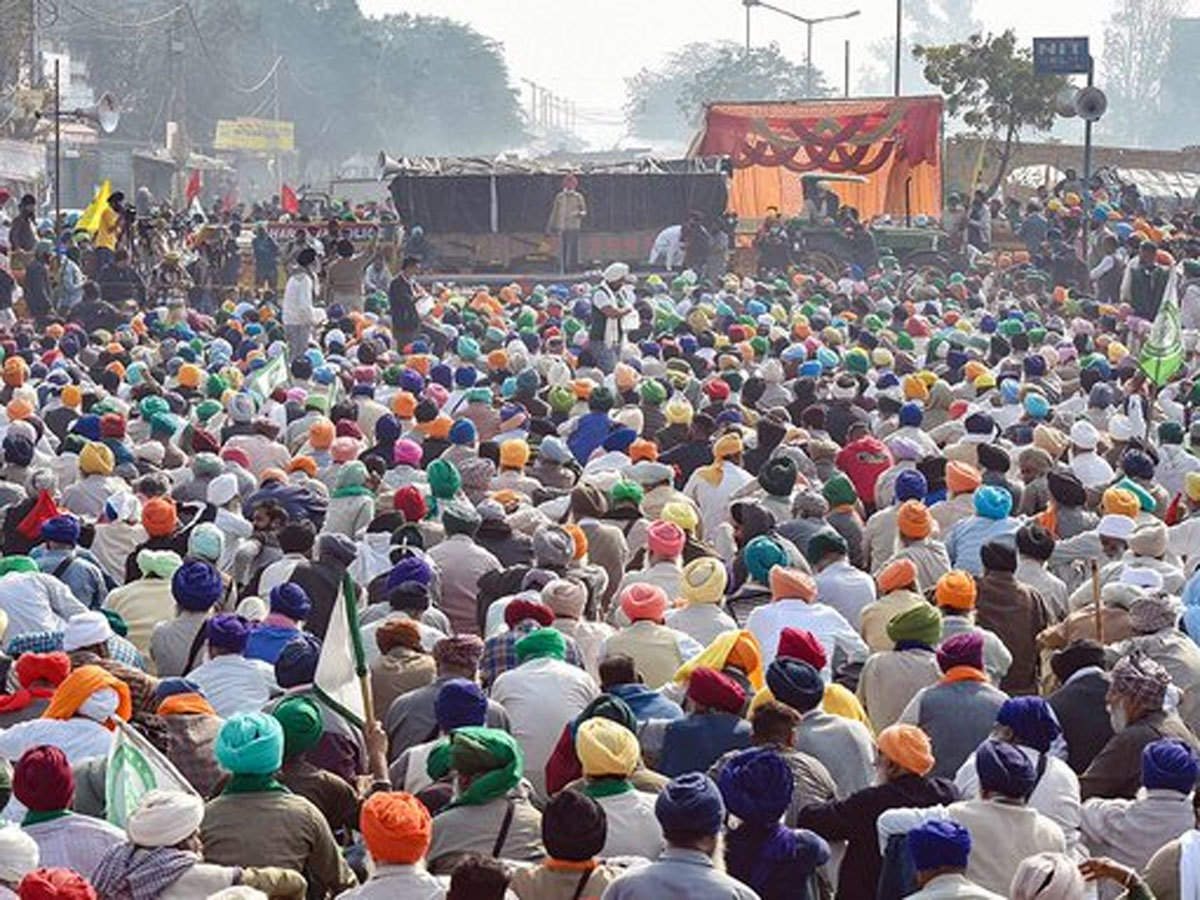 IN the wake of the murderous second wave of the Covid pandemic, which has thoroughly exposed the all-around bankruptcy of the criminal Modi-Shah regime across the country and the world, the farmers at the Delhi borders are playing a stellar role in helping thousands of people in distress. This has put in sharp relief the remarkably sensitive and humanitarian aspects of the historic farmers’ struggle, which completed five months on April 26. As has been repeatedly stressed in these columns earlier, the farmers’ struggle itself has been fighting not only for farmers but for crores of working people who will be hard hit by the three Farm Laws.

The SKM has condoled the sad and preventable deaths of thousands of people all over the country due to lack of oxygen, ventilators, medicines, and hospital beds. It has rightly put the onus of this colossal national calamity on the BJP-RSS central government. The AIKS released a statement demanding that the central government ensure free and universal vaccination across the country, and demanded that the centre put an end to the super-profit drive of the corporates.

HELPING PEOPLE IN DISTRESS
Samyukta Kisan Morcha(SKM) leaders last week took the initiative to hold a meeting with Haryana government officials, including the police. The farmers insisted, and it was agreed, to remove all barricades on one side of the key national highway at the Singhu border, to give free passage to oxygen tankers, ambulances, and other emergency services. As per the agreement, farmers on their part immediately cleared one side of the highway. But the police barricades have not yet been removed. At all protest sites, a passage has already been left from the very beginning of the struggle for all such emergency services.

It needs to be recalled here that on and after November 26, 2020, it was not the farmers who blocked the highways at Singhu, Tikri, Ghazipur, Shahjahanpur, and Palwal borders. It was the police, under the direction of the BJP central government and its Haryana and Uttar Pradesh state governments, who stopped the farmers and erected huge barricades at all these places.

The notorious BJP and RSS IT cells, in a vain attempt to defend their indefensible central and state governments, began spreading malicious canards that it was the protesting farmers who were stopping oxygen tankers from coming to Delhi. SKM actions blew up all these canards.

Farmers then began providing maximum assistance to Covid-affected patients and their families in and around the national capital. They began delivering thousands of food packets to those in need in the villages at all the borders. There are teams of very well-qualified doctors helping the farmers’ struggle at all borders and small hospitals have also been set up. Medical assistance was and is being provided to the local people in the villages surrounding the borders.

APPEAL AND ASSISTANCE TO MIGRANT WORKERS
With the severity of the pandemic now increasing, thousands of migrant workers in and around Delhi started fleeing to their homes by trains, buses, and whatever other transport was available. Migrant workers all over the country had a most harrowing experience when Modi suddenly declared a national lockdown last year on March 24, with just a four-hour notice, without any planning or preparation whatsoever. Lakhs of them had to trudge back hundreds of kilometers to their homes, with their wives and children. Many died of hunger and accidents.

The SKM appealed to all migrant workers to come and stay at the protest borders and offered them free food and shelter. Instead of going home to their villages, where anyway no work was available, they were invited to stay here till the situation normalises, after which they could return to their employment sites. The SKM statement added that with this “the unity of farmers and workers will be reinforced”. In addition, to help the migrant workers who were going away to their homes, farmers went to railway stations and bus terminals in Delhi and gave them free food packets. It was a touching humanitarian campaign by the ‘annadatas’ of our country. It was a stark contrast with the heartlessness of the callous BJP central government.

Now farmers at all borders have begun packing and providing thousands of food packets to help the patients at some hospitals in Delhi. This has been taken note of by some of the media.

At the same time, farmers are taking all steps at the borders to protect themselves from the Covid virus. The administration has set up vaccination centres around the protest borders. Masks, sanitizers, oximeters, thermometers are being provided free to all who need them.

GOVERNMENT PROVOCATIONS CONTINUE
Provocations by the government still continue. While wheat procurement is on, there are regular news of the shortage of gunny bags in the APMC markets of Punjab and Haryana. Because of this, farmers have to sit for several days in the mandis for selling their crops. Farmers are also not getting their payments on time. All these are capricious efforts by the Modi regime to sabotage the mandi system and indirectly start the implementation of the Farm Laws, although the supreme court has stayed their implementation for 18 months.

The Haryana government forcibly tried to reopen some of the freed toll plazas with police help. This was strongly opposed by hundreds of farmers who peacefully freed them again. Now cases have been slapped on several farmer leaders and activists as retaliation.

COMMON STRUGGLE AGAINST COVID AND FARM LAWS
So far as future programmes are concerned, a joint online meeting of the SKM with all the central trade unions has been scheduled for April 28. It will discuss ways and means to strengthen worker-peasant unity in this struggle. The SKM has already given a call to observe May 1, as ‘worker-peasant unity day’ across the country. As reported last week, preparations are on for the important joint national convention on May 10.

Due to the Covid pandemic, the hundreds of enthusiastic kisan mahapanchayats that were earlier taking place in several parts of the country have naturally had to be curtailed. But these are being replaced by online public meetings. For instance, on April 26, the AIKSCC in Telangana organised a huge online public meeting which was seen on Facebook by over 50,000 peasants. Leaders of the BKU, AIKS, AIAWU, AIKMS and many other organisations addressed it.

A piece by Rajeev Khanna in ‘The Citizen’ on April 27 correctly pointed out the commonality of the struggle against the Covid pandemic and against the Farm Laws. It said, “Just as common folk have been compelled to run from pillar to post for basic things like hospital admission, oxygen, and antiviral drugs, the same will be the case with food grains if the country does not rise against the anti-people Farm Laws.”

We shall conclude this piece with the SKM press release of April 27, which said succinctly, “From the capital city Delhi to every corner of the country, bad news is coming because of poor health facilities and infrastructure. Due to pro-corporate policies and governance in the country, even the basic needs of common people are not taken care of. Farmers are also fighting for their basic needs like MSP. The victory of the peasant movement will be the victory of the common people. The needs of poor people have become a business for government and corporates, and this system can be changed only by people’s struggle.”