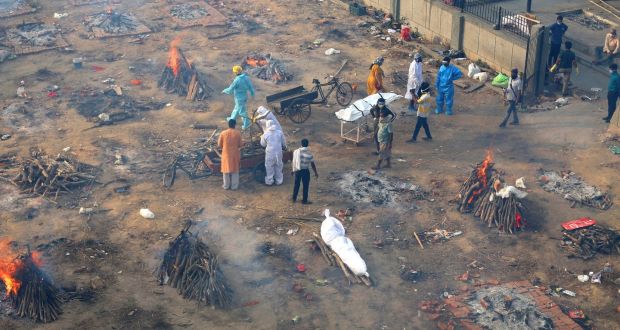 Covid Crisis in India: A Modi made Disaster- International Media Ridicules the Government

BELOW we present how the international media is viewing the second wave of the pandemic in India.

The second wave of Covid-19 has engulfed length and breadth of the nation leaving people and hospitals desperately sending SOS signals for beds, ventilators, Remdesivir and oxygen.

The international media from north to south condemned the Modi government for ineptly handling the pandemic situation in India.

The opinion piece by The Guardian came down heavily on the prime minister for his gross negligence in handling the crisis.

“Political hubris met pandemic reality in India this week. At the beginning of March, the Hindu nationalist government of Narendra Modi claimed the country was in Covid-19’s “endgame”. India is now in a living hell. A new “double mutant” variant, named B.1.617, has emerged in a devastating coronavirus second wave which has seen hospitals run out of beds and oxygen. Mortuaries are so full that bodies are left to decompose at home. Charities warn that the dead risk being left on the streets.”

The Guardian further pointed out:
“Mr. Modi has put the onus on state governments to clear up his mess. The buck stops with him. He should acknowledge and make amends for mistakes that have caused enormous suffering. He needs to engage with experts on how to uphold restrictions; ensure government delivery matches promises; and drop the sectarian ideology that divides when unity is required. Future historians will judge Mr. Modi harshly if he continues with the exceptionalist views that have led to a disastrous public health outcome”.

The Irish Times sharply criticised Modi for the steep rise in COVID cases. The editorial board opines that there was complacency in preventing super spreader events like Kumbh and election rallies.

“The near-vertical rise in the graph of infections in the last couple of weeks in the country of more than 1.3 billion people is being linked to political complacency, poor infection control, new variants including a “double mutant” strain found in close to two-thirds of samples in the most afflicted state of Maharashtra, and “super spreader” events like the gathering of millions of Hindus last month for ritual bathing in the Ganges at Haridwar in Uttarakhand state. And prime minister, Narendra Modi, who did nothing to dissuade devotees from gathering, is being sharply criticised for promoting mass rallies of his BJP in West Bengal which has been holding elections”.

It goes one step further and blames Modi for making the world pay price. It said, “A right-wing populist, his (Modi’s) ego, contempt for science and Covid-19 complacency has all the hallmarks and irresponsibility of Donald Trump and Jair Bolsonaro.”

The Economist: India’s giant second wave is a disaster for it and the world

Taking a swipe at  Modi, The Economist says, “Until earlier this year, India’s government, like so many others, had a patchy but not disastrous record in fighting the pandemic. But through complacency and distraction, Mr. Modi has allowed things to spiral out of control.”

Commenting on the failure of the COVID vaccine policy of India, the post says “By mid-February the government had ordered barely enough doses to protect three per cent of the population (not counting those it is hoping to get from Covax). Keen to promote India’s scientific prowess, regulators approved Covaxin, an indigenous vaccine, before it had completed all the necessary trials, even as they insisted that foreign shots must clear extra hurdles. Less than 10 per cent of the population has received a first dose of vaccine. This is more than in many countries, but India is a huge vaccine-producer and could have done better”.

ABC News: Feels like a country that is broken

“It took only a few weeks for COVID-19 complacency to turn into an overwhelming sense of despair, anguish and anger. Now India, drowning under a surge of cases; feels like a country that is broken.

This year, mass gatherings — including the world's largest religious festival of Kumbh Mela — were allowed to continue virtually unabated, even when the second surge was already well underway.

Complacency, even arrogance, after overcoming the first surge primed the country for disaster”.

Every day, 350,000 new infections and more than 2,000 deaths are recorded in the country. A situation due to the unpredictability of the virus but also to the lack of anticipation, arrogance and demagogy of the Indian Prime Minister.

Presented as the "pharmacy of the world", the country exported and offered millions of doses of vaccine, ensuring that it produced enough for its population to be protected. Three months later, the Indian "example" gave way to a nightmare.

“Such a flashback cannot be explained solely by the unpredictability of a virus and its variants. Narendra Modi's lack of prediction, arrogance and demagogy are clearly among the causes of a situation that now seems out of control and requires international mobilisation. The Prime Minister, after paralysing and traumatising his country in 2020 by decreeing brutal confinement, abandoning millions of migrant workers, completely lowered his guard at the beginning of 2021.”

“The spectacle of lines of ambulances at the gates of overwhelmed hospitals, of sick people’s relatives begging in vain to obtain oxygen and of mass cremations does not lie. From cities to rural areas, from the rich to the poor, the carnage does not spare anyone. Declining until February, the curve of new infection is nearly vertical,” Le Monde said in its editorial.

The Australian, on April 25, termed the handling of the Covid pandemic in India as: “arrogance, hyper-nationalism and bureaucratic incompetence has combined to create a crisis of epic proportions in India, with its crowd loving PM basking while citizens suffocate. This is the story of how it all went so terribly wrong.”

Though the government of India urged The Australian to publish a rejoinder to set the record straight on Covid management, the paper has however not tendered any rejoinder.