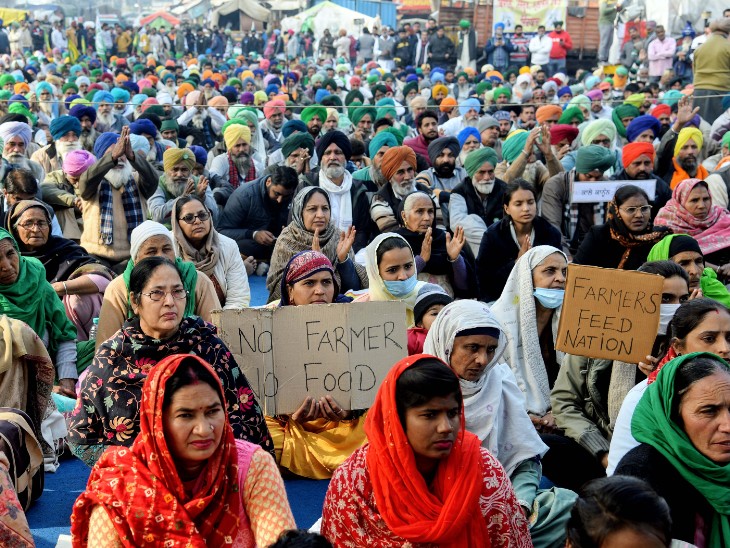 WITH the second wave of the Covid pandemic devastating the country, and the criminally culpable BJP central government under Narendra Modi and Amit Shah shamelessly lifting its hands off its responsibility of helping the people and the states to combat it, an extremely macabre situation has arisen. Thousands of helpless people are dying – without hospital beds, without oxygen, without ventilators, without medicines, and also without vaccines. All over the country, there are reports of long serpentine queues for crematoriums and cemeteries.

The BJP regime is plotting to utilise this situation for stamping out the historic farmers’ struggle, which will complete five valiant months on April 24. There have been several reports in the media that as soon as the state assembly elections are over, the Haryana government and the central government have planned to attack the protest sites and evacuate them in the name of ‘Operation Clean’. The union agriculture minister and the Haryana chief minister have begun this drama by appealing to farmers to end their agitation in view of the Covid threat. The government knows well that the protest would have ended long ago if it had only fulfilled the legitimate demands of the farmers.

DUAL STRATEGY TO COUNTER BOTH COVID AND GOVERNMENT
The Samyukta Kisan Morcha (SKM) has evolved a dual strategy to counter the conspiracy to clean out the farmers' protest sites in the name of the Covid pandemic. It has firmly warned the government that farmers will strongly resist any ‘Operation Clean’ being unleashed on them. It will counter the threat of ‘Operation Clean’ by the government with ‘Operation Shakti’. On the one hand, from April 20-26, in a week being called ‘Resistance Week’, all protest sites will make strong arrangements to protect themselves from Corona, as given below.

On the other hand, many farmers who had gone back to their villages for the wheat harvesting season have been invited to come back to the various protest sites from next week as soon as their crop harvesting is completed, with the slogan of ‘Phir Dilli Chalo’. The powerful Bharatiya Kisan Union (Ugrahan) has already called upon its members to reach the Tikri Border from April 21. The SKM has urged all the other organisations to reach out to their members and giving them a slogan of ‘Phir Dilli Chalo’ from April 24. April 24 will mark the completion of 150 days of the farmers' historic struggle outside Delhi, against the anti-farmer and anti-people Farm Laws imposed by the government of India, and for MSP as a legal guarantee for all farmers.

In the coming weeks, strong arrangements will be made to protect the protest sites from the Covid pandemic. It is worth noting that the pandemic is not new. The spread of the disease was widespread all over the country even at the time when the protests were initiated by the farmers' organisations’, and later at Delhi's doorsteps. In the past five months, there have not been any developments related to the spread of Corona at the protest sites, and this has been noted by most independent observers. Therefore, there is no basis for the government to point a finger at the farmers' movement.

The following arrangements will be made at all the Delhi protest borders to combat Corona:
- At every trolley and tent in the protests, there will be information shared on protective measures to be adopted against Corona;
- Masks will be made available at all protest sites and there will be an intensive drive to promote their use;
- Vaccination camps will be started at all protest sites and protesters above 45 years of age can get themselves vaccinated here;
- Arrangements will be made to prevent the spread of the disease due to gatherings near the stages and in daily meetings;
- All medical camps will have increased availability of thermometers, oxymeters and other equipment. Treatment will be initiated immediately after any symptoms of Covid are exhibited.
- For Covid protection and treatment, SKM will cooperate fully with local administration.

In stark contrast, the sheer ineffectiveness and hypocrisy of BJP governments in combating Corona is now clear for the whole country to see. The prime minister and the home minister themselves are claiming to have mobilised the largest number of crowds in the assembly election campaigns at the time of a pandemic. This government has no moral right to advise farmers about the pandemic. SKM has condemned the government for spreading fear among the people under the garb of the Corona pandemic, for blaming its failures on the general public, imposing fines on them, callously discriminating against state governments led by the opposition parties, and giving corporate houses a free run of super profits at the same time.

NATIONAL CONVENTION ON MAY 10
To further strengthen the ongoing farmers’ movement, a special National Convention will be organised on May 10, 2021, with leaders and representatives of farmers' organisations’ from all over the country, along with leaders of organisations’ of the working class, agricultural labour, women, youth, students and other progressive democratic organisations. It is significant that it was on May 10, 1857 that the first struggle for the independence of India against the hated British rulers began with the revolt of the Indian soldiers at Meerut and their march to Delhi.

The SKM has decided that the date of the proposed ‘Parliament March’ and the exact details will be announced at an appropriate time, after assessing the circumstances.

Expressing concern over the news of the arrest by the Delhi police of some snipers for planning to kill farmer leaders, the SKM has demanded that the details be made public so that the police cannot cover up such conspiracies as had happened earlier.